ISRAEL – Quram - In a new study, published online at the end of July in the journal Religions, Vainstub argues that Qumran was the location of this annual gathering based on a version of the rules of the religious community contained in what's called the Damascus Document or Damascus Covenant. The Damascus Document — so-named from its numerous references to the city in Syria, possibly because Damascus was once ruled by Israel's King David — was copied from an earlier Hebrew source in about the 10th century A.D. It was eventually stored in the Cairo Genizah, a storeroom adjoining a Jewish synagogue in Fustat, the original Arabic capital of Egypt that eventually became a southern neighborhood of the city of Cairo. Destroying any text that contains God's name is forbidden in Jewish religious law, even accidently, and any documents from Cairo's Jewish community were ultimately stored in the genizah just in case, at least until they could be formally buried. As a result, writings accumulated over many centuries in the Cairo Genizah; and in the 1890s, Cambridge University scholar Solomon Schechter visited the site and found a a trove of hundreds of thousands of ancient manuscripts, including Hebrew religious texts, as well as works in several languages on art, literature, philosophy and science. The most complete versions of the Damascus Document were found in the genizah, and fragments of it have since been found among the Dead Sea Scrolls themselves. And according to Vainstub, the version from the genizah in Cairo contains a fuller description of a ceremony referred to in the Dead Sea scroll fragments, which was misunderstood until now. The Cairo Geniza description suggests Qumran was the site of an annual gathering in the month of Sivan, when the holiday of Shavuot is observed to mark the renewal of the Jewish covenant with God. The passage in question in the Damascus Document refers to the Torah — the first five books of the Hebrew Bible — and reads: "And all [the inhabitants] of the camps shall assemble in the third month and curse anyone who deviates either to the right [or to the left from the] Torah."Vainstub suggests the "camps" were Essene religious groups scattered throughout Israel, often as isolated rural communities but also within major cities. He argues the passage shows that a gathering took place at a specific time, and that people from different places were called to convene in one site. Previously discovered archaeological evidence suggests the ancient complex at Qumran would have supported relatively few members of the sect for most of the year, but the new text suggests it swelled to host several hundred people at the time of the annual gathering. The idea that the Essenes gathered at Qumran once a year might also explain the location of the scrolls, as the sect members may have left their religious writings there in the caves that they slept in, Vainstub wrote. "My theory is also consistent with the fact that the scrolls did not necessarily originate from Qumran, but rather were brought to the caves from all over the country and left in the caves over the decades." 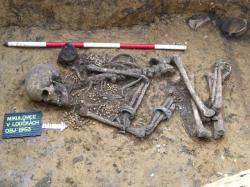 Karahantepe - Historical artifacts unearthed at the archeological site of Karahantepe in Turkey’s Sanliurfa province, considered one of the important settlements of the Neolithic period, reveal the artistic talents of the people who resided there some 11,000 years ago.  The head of excavations at Karahantepe, Prof. Necmi Karul, told Anadolu Agency that the digging was first launched in 2019 and two very productive seasons have been observed since then. Karul further noted that a building with a diameter of 23 meters was unearthed during the excavations and a large part of it was carved into the bedrock and it reached a depth of 5.5 meters from the surface, meaning it was built with the efforts of many engineers. He noted that the artifacts found at Karahantepe were similar to those unearthed at the Gobeklitepe site, but there were also some differences. There were many 3D sculptures and human depictions found at the Karahantepe archeological site, according to Karul, who noted that a Neolithic Man Exhibition was held at the Archeological Museum of Sanliurfa in which a variety of human figures were visible, including depictions of human heads. To date, there are many human figures at the Karahantepe site compared to Gobeklitepe, but it does not necessarily mean that no such figures will ever be unearthed in the latter. One of the finest examples of the 3D artifacts found at Karahantepe is a human sculpture carrying a leopard on his back, he said, adding animal embossings in an attacking position were also found at Gobeklitepe

Khondergey - Archaeologists have discovered a geoglyph depicting a bull during excavations in Southern Siberia. The geoglyph was unearthed near the village of Khondergey in the south-west of the Republic of Tuva, close to Russia’s border with Mongolia, and represents the first such discovery in the region and Central Asia. Archaeologists stated that the discovery was found as part of a wider burial from the Early Bronze Age, dating from more than 4,000 years ago, evidenced by ceramics in situ from that period. Measuring 3 by 4 metres, the bull is depicted by carefully placed pebbles and stone made from locally sourced sandstone. The geoglyph has only partially survived due to road construction in the 1940’s destroying the head and torso, leaving only the backside of the bull with the hind legs and a tail.

Solampur panchayat - Two idols of Lord Buddha have been found from the river bed of Baitarani in Bhadrak district on Monday. Historians believe the idols - a Harsha Mukha Buddha and a Bodhisattva image - may date back to the 7th to 8th century, contemporary to the Ratnagiri monastery site in neighbouring Jajpur. The idols were found from Mudhapada village, close to the Buddhist site of Solampur panchayat, under Bhandaripokhari block. Pritam Mohanty, a local resident, was lifting sand using a JCB machine from the river bed when the machine hit the stone images. While one of the idols is a smiling face of Buddha, another may be image of Manjusri (a Bodhisattva) or Heruka (a fierce protective deity in Vajrayana Buddhism). The second image is not clear as only the top portion of the idol has been found. Magnesia - Archaeological excavations in the ancient city of Magnesia, located in the western province of Aydın’s Germencik district, have brought to light the entrance gate of the Temple of Magnesia Zeus. The Artemis sanctuary, stadium and theater area have been unearthed so far in the ancient city, which was first excavated by German archaeologists before the Republican era. During the excavations, 80 statues and various items have been found. Magnesia was a leading city in ancient times where religious festivals were held in temples and sanctuaries. Stating that they reached the entrance gate of the Temple of Zeus in this area, Kökdemir said: “We think that the temple we found in this area is a well-known temple in the history of architecture just like the Temple of Artemis, which is the fourth largest temple in Anatolia and also located in Magnesia. This is a temple dedicated to Zeus. It was excavated by the Germans before the Republican period. Pieces from this temple were taken to Germany and like the Pergamon Zeus Altar, an exact replica of the Magnesia Zeus Temple was made by using parts from the temple, and it is still on display in Berlin Pergamon Museum.”

Vanguard Cave - Archaeologists have found a 13-metre roof chamber sealed off for at least 40,000 years in one of Gibraltar’s World Heritage Site caves where Neanderthals are thought to have lived for 100,000 years. Located in steep limestone cliffs on the eastern side of the Rock of Gibraltar, the four caves in the Gorham’s Cave Complex have been found to contain extensive archaeological and palaeontological deposits that provide evidence of Neanderthal occupation. The roof chamber was found at the very back of Vanguard Cave, where a project has been under way since 2012 to find out if the cave had passages and chambers that were plugged by later sediment. Initial surface finds have produced remains of lynx, hyaena and griffon vulture as well as scratch marks on the walls, produced by a carnivore as yet to be identified. There is also a large whelk which must have been transported up to the chamber which, even today, is well away from the coast. There is also evidence of ancient earthquakes.

Sharjah - The local mission of Sharjah Archaeology Authority (SAA) announced on Tuesday that it had found a number of ancient Islamic coins in the Central Region, Sharjah. The coins are of rare silver dirhams dating back to the Abbasid Caliphate era, in addition to one copper penny. These coins are among the first editions, bearing icons of that era that were ruled by five of the Caliphs, namely Caliph Abu Jaafar Al Mansur, Caliph Mohammad Al Mahdi, Caliph Harun Al-Rashid, Caliph Muhammad Al Amin and Caliph Abu Jaafar Abdullah Al Mamoun. Among the coins, a dirham bearing name of Mrs. Zubaydah (Umm Jaafar) - Harun Al Rashid’s wife. This new discovery confirms a large geographical range, which extends from Africa in the west, to the Transoxiana region in the east, and according to the administrative division of the Islamic world during the rule of the Abbasid Caliphate, and in particular the first Abbasid era.  this new archaeological discovery dates back to an important era in the history of the Emirate of Sharjah in particular, and the emirates in general, in the second half of the second Hijri century, or since the first Abbasid era. Minting of the discovered coins are believed that they had come from many of the main trade routes to the Arabian Gulf and the coast of the emirates in particular, which proves that the region was a major commercial hub at that time, and a route for the passage of convoys throughout the Abbasid state.