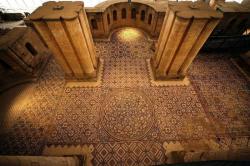 Jericho - Palestinian authorities on Thursday unveiled one of the largest floor mosaics in the world, in the occupied West Bank city of Jericho, after years of restoration. Resembling a fine carpet, the vast mosaic covers 836 square metres (8,998 square feet) at the Hisham Palace, an Ummayad Islamic desert castle dating from the eighth century. The images, seen on dozens of panels, include a lion attacking a deer to symbolise war and two gazelles which symbolise peace, as well as delicate floral and geometric designs. Hisham Palace had lain forgotten for centuries until it was rediscovered in the 19th century, and explored in the 1930s. It was then that the mosaic was uncovered beneath the dust.,"This mosaic contains more than five million pieces of stone from Palestine which have a natural and distinctive colour.,The Hisham Palace near the Dead Sea covers about 150 acres (60 hectares) and comprises baths and an agricultural estate. The Ummayad Dynasty lasted from 660 to 750 AD.

Richborough - The excavation, delayed from last year because of Covid restrictions, began in mid-September and is due to finish next month. “We knew the amphitheatre was there because of a partial excavation in 1849. We had a clue, but only a clue – so we wanted to find out more,” said Pattison. The remains of the amphitheatre are on a low but prominent hill with an oval-shaped depression, close to one of the most important Roman historical sites in England. The settlement dates from the Roman invasion in AD43 to the end of Roman rule in about 410. Part of Emperor Claudius’s 40,000-strong invasion forces came ashore at Richborough, known as Rutupiae to the Romans, which became the main entry point from mainland Europe. A busy town grew up around the port. In the past few weeks, excavators have discovered details of how the amphitheatre was constructed. The exterior wall was up to six metres thick and made of stacked turf, and the interior wall around the arena was made of locally quarried chalk blocks. “Really significantly, we’ve discovered that they rendered the inside of the wall that was facing into the arena, and then plastered it. And there are traces of paint on the arena wall,” said Pattison. “We are beginning to think there was a series of painted rectangular panels, because there are vertical and horizontal lines in red, yellow, black and blue. They probably originally contained painted scenes, perhaps figurative scenes of what happens in amphitheatres. “We don’t have that detail yet, but we have the paint and that’s a really good start. Given that we’ve only excavated a tiny fragment of the wall, it bodes well for better-preserved painted scenes elsewhere around the circuit. So we’re pretty excited.” None of the other 15 or 16 amphitheatres discovered in Britain had this treatment, Pattison said. “This is a very rare find in Britain. There may be about 19 or 20 in the whole Roman empire.” Kayseri  - Experts found 300 square meters (3,330 square feet) of mosaics from the late Roman-early Byzantine period in central Kayseri province’s Incesu district. It is the largest mosaic structure from the Byzantine period in central Anatolia. However, the Byzantine mosaic structure stands out among the discoveries for its well-preserved state. More than 10 rooms were discovered in the structure, which has approximately 300 square meters of solid mosaic floor tiles and is the largest mosaic in central Anatolia. Two mosaic inscriptions were also unearthed in the building as a result of salvage excavations. A mosaic with Latin script was located at the base of a rectangular building, while another mosaic with Greek script was found on the floor of another partially well-preserved walled building. The Latin mosaic reads: "On the occasion of its 30th anniversary and with our prayers for it to reach its 40th anniversary. This building (Fabrica) was built under the leadership of his friend (Comes) Hyacinthos. You, O building, have now reached the most magnificent level." The Greek mosaic reads: "Enter in a healthy way" or "Enter if you are healthy."

Stoke Mandeville - Archaeologists digging on the route of the HS2 high-speed railway have discovered a set of Roman statues at an abandoned church. The collection was uncovered at the medieval St Mary's Church in Stoke Mandeville, Buckinghamshire. Two complete statues, of what appear to be, of a man and a woman were found, along with the head of a child. A hexagonal glass Roman jug was also discovered with large pieces still intact. The discoveries at the church site, which is believed to have previously been the location of a Roman mausoleum, have been sent to a lab for specialist cleaning and analysis.

Karkamis - Seals and prints determined to belong to a female administrator named Matiya were recently discovered during excavations carried out in the ancient city of Karkamis in southeastern Turkey’s Gaziantep province.  Karkamis was the most important administrative center in the region of the Hittite Empire, which ruled over Anatolia and Mesopotamia for centuries. The findings were among dozens of clay seals belonging to the highest officials in a hierarchical order unearthed by an excavation team. It was determined that two-thirds of the Anatolian hieroglyphic seal impressions belonged to Matiya from the period defined as the "Late Bronze Age." The new discoveries are expected to shed light on the role of women in state governance during the Hittite Empire. A bulla, an amulet worn like a locket, containing seal impressions belonging to Piradu, one of the important merchants of the Middle Assyrian Kingdom, was also found during the excavations, said the statement. "The identity of Piradu will contribute to the analysis of Hittite-Assyrian relations which deteriorated towards the collapse of the Hittite State and the chronology of some events of the period. “In addition to these findings, in the Iron Age Cemetery just below the modern cemetery area, salvage excavations were carried out in order to prevent damage to the ancient tombs. Within two years, findings pointing to the cultural and traditional understandings of the 7th and 8th centuries BC were found," it added. Among these was a calcite tomb stele, or carved piece of stone, of a man named Sanai from King Kamani’s reign in the first half of the 8th century BC. 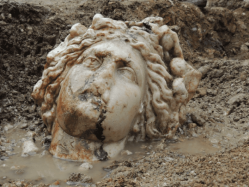 Aizanoi - Two heads of ancient statues of Aphrodite, the goddess of love, and Dionysus, the god of wine, have been uncovered in an archaeological dig in the ancient Greek city of Aizanoi, 50 kilometres from Kutahya city centre in modern-day western Turkey. Described as possessing “astonishing beauty”, excavation coordinator Dr Gokhan Coskun told Turkish state-run news agency Anadolu Agency that the heads of the Greek Gods were unearthed in Penkalas stream, noting that the bodies were found in a previous dig.Penkalas stream is a tributary of the river Rindakos, where other antiquities have also previously been discovered, mainly from the Roman period. “During the excavations, we came across findings that surprised us. These were the heads of large marble statues,” said Dr Coskun. “One head is of “Aphrodite”, known as the goddess of love and beauty, with a height of about 50 cm. The other is from the statue of Dionysus 45 cm high, which is known as the god of wine in mythology.” Aizanoi, Latinized as Aezani, was an important political and economic centre in Roman times. After the 7th century, the city fell into decline; however, surviving remains from the period include a well-preserved Temple of Zeus, a theatre-stadium complex and a macellum (ancient indoor market building) inscribed with the Price Edict of Diocletian.

Chichen Itza - A wooden canoe used by the ancient Maya and believed to be over 1,000 years old has turned up in southern Mexico. The extremely rare canoe was found almost completely intact, submerged in a fresh-water pool known as a cenote, thousands of which dot Mexico's Yucatan peninsula, near the ruins of Chichen Itza. Measuring a little over 5 feet (1.6 meters) in length and 2-1/2 feet (80 cm) wide, the canoe was possibly used to transport water from the cenote or deposit ritual offerings. The canoe is tentatively dated to between 830-950 AD, near the end of the Maya civilization's classical zenith.

Sari Deula - Archaeologists have stumbled upon two ‘amalakas’ while excavating the Suka-Sari Deula complex on Friday. The structures were found in the north-east direction of the Sari Deula where excavation is being carried out at present. An amalaka is a stone disk with ridges on the rim, that sits atop the temple’s main tower. It is crowned with a kalasha from which a temple banner is often hung. While one ‘amalaka’ is in good condition, the other has been partially broken. Superintending archaeologist, ASI Bhubaneswar circle, Arun Malik said one of the amalakas may belong to any of the temples in the north-east direction. “There are three temples in close vicinity including two that exist next to each other in the north-east direction of Sari Deula. One of the two temples predates the other. There are chances that the amalaka that was found in its entirety may belong to the partially buried temple behind the Gouri Shankar temple. But it is too early to say this and we have to wait till the entire structure is exposed”, he said. Including this new finding, remains of four temples have been found from the Suka-Sari Deula complex so far. ASI now plans to excavate the 200-metre area between the Sari Deula and Bindu Sagar where it is believed that many temples were buried when the lake was created.