USA – Freedom - A Native American's skeleton, dating back hundreds of years, was recently found while workers were doing construction on a home. State Police and the New Hampshire State Archaeologist Richard Boisvert asked that the location of the home be withheld. Boisvert said the bones were those of a Native American who lived around 300 to 400 hundred years ago. As of Wednesday, the archaeologist was almost done with the scene. More details about the person, including his or her gender, will emerge in the coming weeks as experts continue to study the remains.

JAPON - Asuka Village - Japanese archaeologists say they have unearthed huge boulders that were used to wall a pond at the site of an ancient imperial palace in western Japan. The discovery was made at the Asukakyo Enchi garden, which dates back more than 1,300 years, in Asuka Village in Nara Prefecture. The garden was discovered in 1999. The researchers from the prefecture’s archaeological institute have excavated one of 2 ponds in the garden. They recently found huge boulders piled up in more than 3 tiers on the eastern slope of the pond. The boulders were arranged over a distance of 30 meters. The largest, weighing about 2 tons, was 1.5 meters wide and one-meter high. The archaeologists say it is the first time that such huge boulders have been found used for ancient ponds. An expert says that builders probably used the massive stones to show off the power of the emperor. 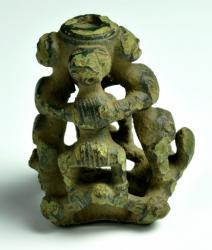 Hvirring - Here's a cool new detector find from Hvirring in central Jutland, Denmark. I've never seen a piece like this before: measuring only 45 mm in length, it must be a top mount for something - box, horse yoke, staff? But the motif, four dancing gripping beasts, and the style they're executed in, place the thing firmly in the 9th century. Note the little round ears and the cross-hatching on chest and rump.

ITALIE - Monte 'e Prama - 37 years after their discovery, the stone giants of Monte 'e Prama are being shown to the public for the first time in the gallery of Li Punti in Sassari (Sardinia, Italy), for the exhibition 'La pietra e gli eroi' (Stone and the heroes). On display 25 impressive statues about two metres tall and 13 models of nuraghi, the ancient Sardinian towers. Ten tons and 5,178 fragments of white limestone have been reassembled in 16 statues of boxers (some with a curved and rectangular shield above their heads), 5 of archers and 4 of warriors (with a round shield), characterized by magnetic eyes represented by two concentric circles.  Everything started in the spring of 1974, when the plow of Sisinnio Poddi, in Monte 'e Prama, near Cabras, came up against something very hard. After removing the earth, the farmer was amazed by a two wide-eyed stare framed by a stone face. The report to the authorities was immediate and between 1974 and 1975, the Archaeological and the University of Cagliari set up the first excavation. The campaign got to the heart a few years later, in 1979, under the guidance of professor Tronchetti and along with his team he brought to light an entire necropolis. Speaking of dating, scholars currently are supporting two timeframes: the first one places the statues around the seventh century BCE, the other one goes to the end of the first millennium BCE. After the discovery, the debate went on for a while, but it was followed by a long period of silence. The entire complex was closed and the findings stored in boxes in the basement of the Archaeological Museum of Cagliari. From that moment on, the curtain fell over the ancient sculptures. Archaeologists will soon return to Monte 'e Prama, perhaps as early as next spring.

ROYAUME UNI -  Experts have been debating for decades the impact the Romans had in the Lowland North West of England. Dr Philpott, the head of archaeology at the National Museums inLiverpool, said  there was a complex and changing relationship during more than 300 years when Britain was a province of Rome. It was far from a one-way process of ‘Romanisation’. He said: “We are looking at a very diverse group of people coming in and interacting with a diverse group of tribes.“The people who were here brought something to the mix.“The natives brought their own ideas and material culture which blended with Roman culture.” The invaders were not all Italian. The Roman army in Britain included men from Gaul, Spain and from the Rhineland. He said: “There would have been a wide variety of Latin dialects spoken.” Dr Philpotts said some would have embraced Roman ways as a means of social advancement while others – particularly in country areas – would reject them. However, archaeology – which relies on the evidence of things which can survive in the ground – struggles to show the identity of people through things like dialect, language, clothing and hair styles. Work is on-going to identify the territory of British tribes under Roman administration, from coin finds and pottery styles and through the evidence of metalwork such as brooches and horse trappings. There is also evidence that the Roman era saw more building – this is possibly a reflection of a growing population. Dr Philpotts said: “You are beginning to see a landscape filling up. “It seems to be the incoming people who are filling up the landscape in the Roman period.”