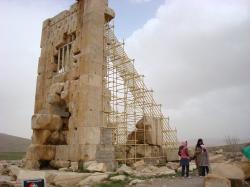 Pasargade - A new round of archaeological excavation has recently commenced at the UNESCO-registered Pasargadae, southern Iran. It is a follow-up project which aims to reveal original map and architecture of a ruined “stone tower” along with its surroundings in detail, Mehr reported. The tower closely resembles Ka’ba-ye Zartosht, an Achaemenes-era (550-330 BC) cube-shaped counterpart standing in Naqsh-e Rustam compound near Persepolis, said archaeologist Ali Mousavi who heads the excavation. The two may probably have similar practical usage, however, their original purposes are still uncovered, Mousavi added.  Situated in about 50km north of Persepolis, Pasargadae was the first capital of the Achaemenid Empire. Its palaces, gardens and the mausoleum of Cyrus the Great are outstanding examples of the first phase of royal Achaemenid art and architecture and exceptional testimonies of Persian civilization.

CHINE - Qiaojinshangjie - An ancient village site dating back to the Han Dynasty (202 BC - 220 AD) has been found in southwest China's Sichuan Province, local archaeological authorities said Thursday. The site, dubbed Qiaojinshangjie Site, is located around a college in Xinjin County of Chengdu City, capital of Sichuan. Archaeologists say it is rare to see this kind of Han Dynasty village in the province. Pits, ditches, remains of nine houses, a well, and river courses were discovered in the site, along with plenty of items including cooking utensils, kettles, urns, pots, tiles, and bronze coins. "This used to be a relevant large residential community, about the size of a village," said Yang Yang, leader of an archaeological team from the cultural relics and archaeology institute of Chengdu. "We figured out the distribution of the village through excavation. The residential area was located in the western and northern areas, while drainage connecting with the river was in the eastern and southern parts of the village," said Yang. "These findings are significant for the study of grassroots production and living, and the tribe's distribution and economy during the Han Dynasty," he added. More objects, such as bowls, cups, pots, kettles, incense burners and inkstones between the Tang (618-907) and Qing (1644-1911) dynasties were also found in nearby areas.

Shivamogga  - More than 1,000 rockets were found in slush and mud removed from a well in Nagara village, Hosanagar taluk of Shivamogga. They were found during field work . “Even though rocket technology was first developed by Tipu Sultan (Tipu Sultan deployed the rockets against advances of British forces and their allies in their 1792 and 1799 Siege of Srirangapatna) there’s no evidence that these rockets belong to him. A detailed analysis is required to confirm it.

Maltepe - What archaeologists have hailed as a “monumental” 3rd century AD Roman tomb has just been discovered in Bulgaria, and researchers believe it most likely houses the remains of a Thracian aristocrat. The tomb was found during excavation work that was being conducted at the Maltepe Burial Mound, which is located very close to Plovdiv in the southern region of Bulgaria. The size of the burial bound is such that it is the largest such mound that has ever been found in the Balkan Peninsula, with the ancient Thracian’s tomb buried about 16 feet below the surface of the mound. The Roman tomb that was recovered was measured at 22 feet long by 22 feet wide and has been estimated to stand at 16 feet. According to Professor Kisyov, the tomb is most likely that of a Thracian who presided over Philippopolis, as indicated by the placement of the tomb inside the burial mound. “In my view, the tomb belongs to a Thracian noble who ruled the city of Philipopolis in the middle of the 3rd century AD, the time when power in the Roman Empire was assumed by emperors of common origin, who had not been connected to the elites. The most typical indicator that the tomb itself is most probably connected with some of the Thracian rulers is its location inside a burial mound.” “We are still at the beginning of the tomb’s excavation. Right now, we are on the roof of the tomb which has been partly destroyed by treasure hunters’ digging. According to our calculations, we still have to go about 4.55 meters in depth in order to reach the actual burial chamber.” As far as dating the tomb to the 3rd century AD, Kisyov further elaborated that archaeologists were able to verify that pottery and coins found near the burial mound also date back to this time period.

Cerro Esmeralda  - A new study of a fifteenth-century grave in northern Chile has detected the presence of cinnabar, a highly toxic, fine-grained red pigment derived from mercury ore. Discovered in the 1970s, the grave of the Cerro Esmeralda mummies contained the remains of a young woman around the age of 18, and an approximately nine-year-old girl. The two are thought to have been killed in a ritual Inca sacrifice, before their bodies had been placed in the fetal position in the grave, along with more than 100 artifacts. Fabric in the grave was colored with bright-red pigment, which the Inca usually produced using the mineral hematite. Use of cinnabar among the Inca has been linked to high social status, but the scientists, led by Bernardo Arriaza of Chile’s Universidad de Tarapacá, do not yet know where this cinnabar came from or why it was used. They did note that the mineral has toxic effects on human health, however, pointing out that nervous, muscular, and gastrointestinal problems, and even death, can occur when the mineral powder is inhaled. The Inca may have scattered the red powder over their ceremonial burial sites in order to deter grave robbers, the researchers suggested.

– Busk - Specialists working on the restoration of St. Paraskeviya Church in Busk, Lviv Oblast have discovered a cast bronze pectoral cross (a kind of sacred diptych) under the floor near the altar of the church. It dates back to the 12th or 13th century,  Engolpions appeared in Kyivan Rus during the expansion of Christianity. The relics of saints or other sacred things were usually placed in the middle of these crosses. Archaeologists say that the images on the cross portray the spiritual life of Rus inhabitants at the dawn of Christianity in Kyivan Rus-Ukraine. (*An engolpion is a sort of pectoral cross/medallion worn by Orthodox and Eastern-rite Catholics bishops and suspended from the neck by a chain-Ed.) The crosses also testify to the metalworking skills of Kyivan Rus artisans. The raised black engolpion has rounded ends and small bead-like ornaments along the upper and lower sections. The face side portrays the crucified Jesus and the reverse side shows an embedded carved cross. It is supposed that the cross belonged to a priest buried in the old churchyard cemetery