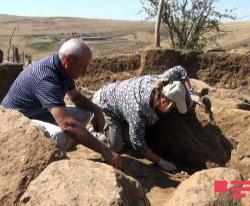 Monidigah - The Institute of Archaeology and Ethnography under the Azerbaijani National Academy of Sciences, the French National Research Center, and the Paris Saint-Germain, with the joint efforts of the staff of the National Museum of archaeological excavations in the village of Lerik, discovered a 3,000-year-old sarcophagus in Monidigah, Lerik. The discovery was confirmed by Abuzar Alekperov, the head of the archaeological collection of artifacts at the Institute of Archaeology and Ethnography. Alekperov says that French archaeologists Jacques de Morgan and his brother Henry Morgan led an archaeological exploration in Lerik in the late 19th century, where they discovered bronze and iron-age stone graves and a considerable amount of artifacts. A joint archaeological expedition between Azerbaijan and France in 2011 was established at the initiative of the French team. The stone boxes found during the archeological searches were partly damaged. They are sample of the artifacts, including pottery, jewelry, weapons, household equipment, that was found on site. All of the findings were placed in special containers for preservation. Professor Michel Casanova from France, who led the expedition, told APA's south bureau that Monidigah artifacts will be taken to France to be examined in the laboratory, "We hope that these materials will be of great importance in the study of history."

Fort Pierce - Shipwreck divers have announced quite the anniversary present for the flagship of a 1715 Spanish treasure fleet, the Capitana: 52 gold coins, 40 feet of gold chain, and 110 silver coins and buttons all worth over one million dollars. The find, made over a month ago on June 17, was kept under wraps until now. The 11 ships were part of Spain's Tierra Firme and New Spain fleets, regular convoys of vessels that transported gold, silver, and other precious resources from Spanish colonies in the New World to Europe. The ships sank during a hurricane that hit them on July 30 and 31, 1715 as they sailed past Florida on their way back to Spain.

BRESIL - Rio de Janeiro - Some 500 artifacts made from stone and shells that experts consider vestiges of a human presence in southeastern Brazil dating back about 4,000 years were found during excavations for an expansion of the Rio de Janeiro subway. The artifacts were found at an archaeological site near the port and downtown area, the Rio de Janeiro state government said. The site, which was preserved to allow a team of archaeologists hired by the construction company to do its work, has yielded 50 stone artifacts and about 400 seashell instruments. The artifacts are typical of those made by the primitive nomadic groups that moved across the Rio region long before the first indigenous peoples settled in the area, state officials said. "These are pieces between 3,000 and 4,000 years old from the period when paleo-Indians who roamed the territory around the Guanabara Bay were hunters, fishermen, gatherers and nomads, and had not organized into tribes yet," the Rio de Janeiro state government said in a statement. Experts have identified spearheads and tools, such as primitive hammers, axes and scrapers, used to take meat off animal hides and to work stones. 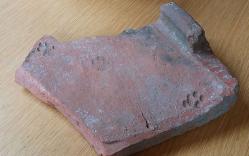 Gloucester - A cat's paw print that has survived for almost 2,000 years has been spotted on a Roman roof tile that was unearthed by archaeologists in Gloucester. The tile was one of scores of Roman relics found during a dig in Gloucester in 1969 but the paw prints have only just been noticed. They was spotted by an archaeologist sifting through thousands of fragments of Roman roof tile at the city museum. "When Romans made roof tiles they left the wet clay out to dry in the sun," said a museum spokesman. "Animals, and people, sometimes walked across the drying tiles and left their footprints behind. "The cat is thought to have snuck across the wet tiles in Gloucester in about AD100, probably at the annoyance of the tile makers, but this did not stop the Romans from using the tile. "The tile, a type called tegula, was used on the roof of a building in what became the Berkeley Street area of modern Gloucester."

Vilnius – A eam of Israeli and Lithuanian archaeologists have revealed remains of the Great Synagogue of Vilnius using ground-penetrating radar, 70 years after the building and its surrounding structures were burned by the Nazis. The researchers found evidence that parts of the synagogue structure may still exist below the surface, along with Jewish ritual baths, known as mikvahs. An excavation of the site, which is partially covered by a school, is scheduled for 2016.

POLOGNE - S8 highway from Białystok in north-east Poland to Warsaw- Archaeological digs being conducted along the construction of the S8 highway have yielded some fascinating finds. Findings include items from the Roman era, ceramics from the 17th century and almost untouched fragments of tanks from the Second World War. The most valuable finds are from a cemetery dating to the Iron Age in the period 300-500 BC, archeologist Sławomir Żółkowski said. "Some of the findings are items imported from the Roman Empire," he told Polish press agency PAP.