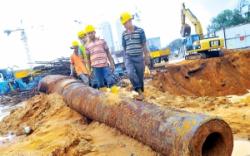 Galle - Parts of an artillery gun with historical value was found in the Galle Face area yesterday. Parts of the gun were detected by workers at a private construction site when they were excavating an area for construction, Military Spokesman Brigadier Jayanath Jayaweera told the Daily News. He said the main part of the gun is 26 feet in length.

Hinckley Mounds - The Hinckley Mounds represent a large village where Fremont Indians lived and farmed from about 700 A.D. to 1300 A.D., according to Searcy. One of the structures students worked to excavate was a traditional pit house that featured a clay-lined hearth and ventilation shaft. Inside, they found several artifacts, including pieces of bone harpoons that were used for fishing. Another pit structure had a circular design with a series of rooms attached to each other, which Searcy said were possibly used for food storage purposes. A small clay doll common to Fremont Indians was discovered inside. At the most well-known mound the team found two sets of adobe walls, indicating that the home was used during two occupations with a group leaving the structure and then returning to build it again. One of the main reasons Searcy decided to focus on researching the Provo Mounds is because they are endangered. While about 120 mounds were noted on a map made by amateur archaeologists in the 1930s, only a handful remain now due to development expansion. 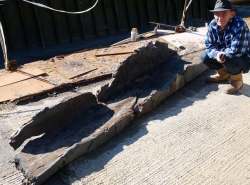 Faversham - A rare wooden log boat dating to the Bronze Age has been discovered lying in mud near a Kent boatyard. Dr Paul Wilkinson, from SWAT Archaeology, was called by boatyard owners in Faversham to what they thought was part of an Anglo Saxon boat which had been unearthed from nearby blue clay. But after further inspection, the vessel was found to date back further to 2,000 BC - the Bronze Age.  To stop it drying out, the 10ft part of the boat was returned to water and the site is being investigated to see if the other half has survived.

Brignall - The 12-day excavation by Northern Archaeological Associates [NAA] will explore the remains of what they believe is the shrunken medieval remains of Brignall, near Barnard Castle, County Durham. The modern village is made up of just a handful of homes but is believed to have been much bigger in medieval times. Archaeologists believe they know where the former village was thanks to a modern surveying technique, known as LiDAR, which has provided a digital model of tiny changes in the height of the land surface, revealing property plots to the south of the former road alignment, boundary walls and the remains of medieval ridge and furrow cultivation.“The modern village is just a collection of farms and buildings which are quite some distance from the medieval church. Historically there might be a number of reasons for that distance. It looks as though the medieval village was much bigger and more extensive than the current settlement which could explain it .

CHINE - Duolun  - Chinese archaeologists have discovered a burial tomb for a noble that could date back to the Liao Dynasty which ruled from 916 to 1125 AD in China's Inner Mongolia Autonomous Region. The tomb, 300 metres from the tomb of a concubine, is in Duolun county, according to officials at the regional institute of archeology. "They are in the same valley. Its owner may be a key member of the concubine's family," Gai Zhiyong, deputy head of the institute, was quoted as saying by state-run Xinhua news agency. Currently, archaeologists are removing the tomb door, which is made from crystal-like bricks and its passage features black bricks. Gai said the delicate decorations inside the grave show the high rank of the noble. Similar decorations have only been found in two Liao Dynasty tombs and both were high-ranking nobles. The Liao Dynasty was founded by the Khitan tribes and ruled the northern part of China.

INDE – Amaravati - The workers found a structure dating back to the Satavahana regime at ancient Amaravati, while digging to build pillars for the new gali gopuram of the Amaralingeswara Swamy temple.The workers found a wall, a Shiva lingam and some old clay utensils. Temple officials immediately called archaeology department officials and a  team, led by deputy superintending archaeologist D. Kanna Babu,  inspected the spot. Mr Kanna Babu said that two-metre wall belonged to the 1st century.  The Shiva lingam was made of marble and other objects also belong to the Buddhist era. Mr Kanna Babu said the archaeology department would conduct further excavations at the place. Recently, during the demolition of the gali gopuram, some idols believed to belong to the previous Buddhist era were found and were shifted to the government museum at Amaravati.

Keezhadi -  The Archeological Survey of India (ASI) has brought the curtains down on the first phase of the massive excavation of the Sangam Age habitation site it had unearthed at Keezhadi, a non-descript hamlet in Sivaganga district.The 7-month toil of the ASI team under the leadership of Superintending Archeologist K Amarnath Ramakrishnan under the coconut groves of Keezhadi Pallichandai Thidal has thrown up a wealth of historical information dating back to the Sangam Age. Dilapidated buildings, stone chambers, brick tanks, ring wells, drainage channels among others found under the 43 trenches dug as part of the excavation reveal that it had been a major habitation site in the past. About two dozen Tamil Brahmi-inscribed pot shreds carrying names such as Aadhan, Uthiran, Iyanan and Saragu; 350 graffiti including fish (the symbol of Pandyas), swastika, boat, bow and arrow and ladder on black and red ware; 1200 antiquities of which 800 are glass beads and semi-precious gemstones such as chalcedony, agate, milky quartz, crystal ear lobe and pearl beads, iron implements like like spear, offence objects like plough, bone stylus, shell bangle, antimony rod, ivory dice, chess coins, clay hopscotch, Rouletted pottery et al that have been recovered from the site indicate that Keezhadi had throbbed with life some 2500 years ago.“The recovery of treasure trove of artefacts from the site is a strong indicator that the present Keezhadi was a flourishing urban centre with trade links with Rome,” says Amarnath. According to him, this is the first time a major habitation site has been unearthed in Tamil Nadu after Arichamedu in 1947 and Cauvery Poompattinam in 1965. The ASI zeroed in on Keezhadi after inspecting  400 villages along the banks of Vaigai from which it traced archeological evidence from 293 sites. Based on classification by means of mound in the valley and expanse, it chose the site. “As the period of agreement with the land owners has come to an end, we have closed the site on Sunday,” says Amarnath hoping to start the second phase in January next with a plan to dig 50 more trenches.An onsite museum has been proposed. “We have requested 2 acres of land from the state for this,” he says. Dhan Foundation’s K.P.Bharathi says the Keezhadi and Kondhagai panchayats have agreed to  earmark lands for the project. 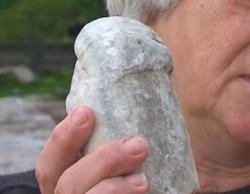 Koloto - A find that is said a giant phallus which was part of a statue of god Hermes has been found at the mountain peak known as Koloto near the town of Orehovo, Chepelare Municipality, in Southern Bulgaria, which the locals believe was an Ancient Thracian shrine.