Little Wittenham -  A dig has been taking place over the last three weeks at the Earth Trust at Little Wittenham. The Earth Trust lies close to the Wittenham Clumps, the site of an Iron Age hillfort. A previous dig 15 years ago revealed the remains of roundhouses dating from around 400 to 100BC. This month's dig aimed to shed light on the people who lived in the settlement. 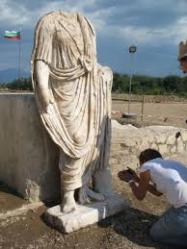 Heraclea Sintica - The marble female head that we unearthed in Heraclea Sintica is very well preserved, including all details on the face, The head is perfectly preserved and is very finely crafted. It had been laid under the foundations of a Late Roman wall, the expert said. “We are joking, we have a very nice head but the body is missing, and, as you know, in August we uncovered another nice statue, a body of a man in his toga, but without a head,” said Dr. Vagalinski. He said both discoveries raise interesting questions about why in ancient Heraclea Sintica they laid well preserved parts of sculptures under constructions; what symbolism was there; what kind of protection they sought. He went on saying that both the head and the togatus appear to have been very carefully placed and had not been used as a building material. According to Dr. Vagalinski, quite possibly they were used as symbolic protection for the buildings in that seismic area, where the ancient town of Heraclea Sintica was located.

Marcavalle - Two human burials estimated to be about 3,000 years old have been discovered at Marcavalle, an archaeological site within the city of Cusco. Archaeologist Luz Marina Monrroy Quiñones said the first burial contained the remains of a young person who was under the age of 20 at the time of death. The body was placed in the grave in a flexed position and surrounded by stones. A circular, perforated gold plate was found near the skull. In the second burial, the excavators uncovered the remains of a younger person who was placed on his or her side next to a piece of volcanic rock, along with pieces of obsidian. At other sites in Marcavalle, items uncovered included decorated pottery, bone tools, burned food products, stone mortars, evidence of a stone tool workshop, a series of enclosures made with stone walls, a raised platform, and an alpaca skeleton, which is thought to have put in a well as an offering.

New Forest - Four cremation urns were discovered in southern England, on the edge of New Forest National Park. The urns, estimated to be about 3,000 years old, had been inverted and placed in small pits, according to community archaeologist James Brown. One of the urns has a decorative band pattern, he added. The excavators also recovered two Neolithic flints estimated to be about 5,000 years old. One of them is thought to have been used as a spear on the end of a wooden shaft. The artifacts will be dated and conserved.