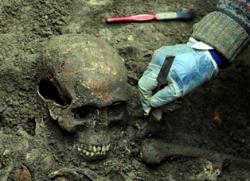 Durham - Durham University archaeologists have found the remains of many more human bodies at a dig on the City’s World Heritage Site, providing clear evidence of a centuries-old mass grave.The number of bodies found has risen from four to 18. Experts first thought they had uncovered remains of Durham Cathedral’s medieval cemetery, whose boundaries may have extended further than the present day burial site. But further investigation has revealed an unorthodox and intriguing layout to the bodies which archaeologists say is proof of a mass burial. Richard Annis, senior archaeologist, Archaeological Services Durham University, said: “We have found clear evidence of a mass burial and not a normal group of graves. “One of the densest areas of the excavation was further north, which is further away from the edge of the presumed graveyard. “The bodies have been tipped into the earth without elaborate ceremony and they are tightly packed together and jumbled. “Some are buried in a North to South alignment, rather than the traditional East to West alignment that we would expect from a conventional medieval burial site.” The same Durham University team will carry out further research into the remains, which will include dating the bones and looking for clues as to their origin. This work is expected to begin in the New Year.  Mr Annis added that no definitive interpretation could be offered at this stage in the investigation: “The process of post-excavation processing, examination and analysis is essential to allow us to draw proper conclusions about this group of human remains. "It is too early to say what they may be.” The evidence of human remains was found earlier in November during building work at the University’s Palace Green Library. With the necessary permission from the UK’s Ministry of Justice, archaeologists are carrying out excavation works in the area before taking the bones away for further examination. By law, the bones must eventually be reinterred at an approved burial ground.

Jämsä - Veikko Kuusmik, an amateur archaeologist from Jyväskylä, found the treasure trove in Jämsä using a metal detector. He stumbled on a previously unknown Iron Age burial ground close to the Jämsänjoki River. The find contains many items from the 600-1300 AD period, some of which were apparently damaged during cremation rites. There were jewellery fragments and even weighing scales, suggesting that one of the graves may have been that of a merchant. "Yes, this is treasure here," said Miikka Kumpulainen of the Museum of Central Finland in Jyväskylä. "It’s rare to find this many artefacts in one place." The pick of the finds is, according to the museum, a decorative silver spoon from the early 17th century. The hoard will be on show at the museum in Jyväskylä for four days at the start of December, before the artefacts are sent for conservation work.

Bujang Valley - A housing developer has demolished several temples sites, including an 8th century heritage site, in Bujang Valley, Kedah, and the authorities are not taking any action to stop the act. Non-governmental organisation Bujang Valley Study Circle chairman V Nadarajan has urged the Tourism and Culture Ministry to stop the developer from further destroying the area and preserve the site. Nadarajan said several ancient temples, called Candi, had been demolished in the last few years to make way for development. He said the developer had now demolished the most famous 8th century temple remnants known as Candi Sungai Batu estate or Bujang Valley site 11.The Bujang Valley is an archeological site and excavation had revealed jetty remains, iron-smelting areas and a clay-brick monument dating back 110AD making it the oldest man-made structure to be recorded in South-east Asia. “It is the most important entry port before Malacca (15th century) and Singapore (19th century). Bujang Valley has been a mid-way hub to Arab nations, India and China,” said Nadarajah.

Nanhai 1 - The wooden Nanhai 1 sank near Yangjiang in the southern province of Guangdong during the Southern Song Dynasty of 1127-1279, with an estimated 60,000 to 80,000 items on board. For centuries it was preserved under the sea by a thick covering of silt, and it was discovered accidentally by a British-Chinese expedition looking for a completely different vessel, the Rhynsburg from the Dutch East India Company (VOC). The Nanhai 1 was salvaged in 2007, and its cargo of porcelain, lacquerware and gold objects is "more than enough to stuff a provincial-level museum", said the Southern Metropolis Daily. Since its recovery the merchant ship has been kept in the sealed-off steel container in a specially built glass-walled exhibition hall, the report said. The vessel's "full excavation" was officially launched Thursday and authorities expect to retrieve all its relics in the next three to four years, it said, citing Tong Mingkang, a deputy head of the State Administration of Cultural Heritage.Archaeologists plan to spend the first year clearing away the silt covering the ship and removing the most valuable items from the hold, the paper said. The excavation site will be open to the public one day every week, Tong was quoted as saying. More than 6,000 relics have previously been recovered, the report said. The vessel's exact route is not known, but it is believed to have been plying the so-called "Marine Silk Road" which linked China with India, the Middle East and even Africa in ancient times.