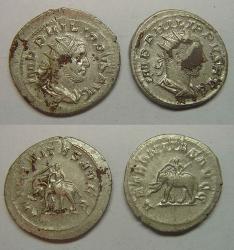 Yeovil - Mark Copsey, 44, was levelling a recreation ground for a hockey pitch when he spotted something in the soil. He found a collection of 3,339 silver coins carrying depictions of an elephant and a hippopotamus buried around 270AD. Experts say the coins were made during a time of inflation and their discovery triggered an archaeological investigation that revealed a small Roman settlement. Experts established that the coins were from the 2nd-3rd centuries AD, with 164 being dinarii, (ok) four brass sestertii, and the rest radiates. Some of the coins carried the heads of empresses, and others emperors, including Philip I, born in Syria of a Syrian father, around 204AD.

INDE - Thotlakonda  - The unkept Buddhist heritage site of Thotlakonda is all set for a makeover with restoration works going on in a war-footing. The 2,000-year-old heritage site was spotted by the Indian Navy during an aerial survey in the 1980s following which the AP state archaeology department conducted major excavations during 1988-1993. The excavations led to the establishment of a Buddhist complex. However, bricks were laid on the excavated base structure to give the visitors an impression of what the original might have looked like.

CHINE - Sanxingdui - Precious artifacts such as jade tablets and gold foil have been found in the prehistoric Sanxingdui Ruins in southwest China's Sichuan Province, said archaeologists on Thursday. The discovery of gold artifact early in 2015 was the first this century. Gold masks were unearthed there in 1986, when the excavation of the ruins, which date back to more than 3,000 years, began. Five stretches of ancient city walls, discovered in the north of the site between 2011 and 2015, may be part of two small towns, which are 460,000 sq meters and 88,000 sq meters, respectively, said Lei Yu, head of the excavation work with the Sichuan Cultural Relics and Archaeology Research Institute. The new findings showed the area was likely to be the core zone of the site where high-ranking people lived, he said. The discovery of gold and jade proved the status of the buildings of at the site, said Lei. "It shows the Sanxingdui site remained rather prosperous in the early period of the West Zhou Dynasty (1046 BC - 771 BC)." The Sanxingdui Ruins are in Guanghan City, some 40 kilometers from Chengdu, capital of Sichuan. They are believed to be remnants of the Shu Kingdom that suddenly disappeared some 3,000 years ago. Listed among China's top 10 archaeological findings of the 20th century, the Sanxingdui Ruins, covering an area of 12 square kilometers, gave strong evidence of the diverse origins of Chinese civilization. The place around the ruins was an ordinary rural area 100 years ago until a farmer, Yan Daocheng, found a bright piece of jade while digging a ditch in 1929. Two sacrificial pits filled with more than 1,000 national treasures, including gold masks, bronzeware, jade tablets, ivory and sacred trees, were discovered in the area in 1986 when workers were digging clay for bricks. In 1988, the Sanxingdui Ruins were put under state-level protection.

OMAN - Maliha - The discovery of an ancient tombstone inscription in Sharjah dating back to between 215BC and 222BC was on Wednesday described as the oldest archaeological find, proving that the ancient kingdom of Oman existed in the late 3rd century BC. The inscription found engraved on the tombstone of a huge grave consisting of an underground burial chamber bears the name and identity of Amad Bin Jar Bin Ali Kahin, the king of the ancient kingdom of Oman, The inscription, written in Aramaic and a southern Arabic language, also includes the date when the tomb was built, saying it dates back to a time corresponding to the year 221/222 or 216/215 BC. Maliha, located 50km east of Sharjah city, is a treasure trove of ruins, artefacts and rare wildlife and plants.