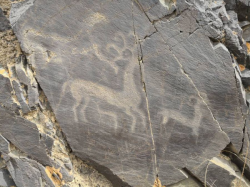 Yangkan  - Archaeologist in Dahe town in Sunan county in Northwest China's Gansu province discovered many ancient rock paintings, including some in deer-shaped pattern, in the Yangkan Gorge and the Yumu Mountain in the Qilian Mountains on April 15. The Yangkan Gorge, where the rock paintings were found, is located with at an altitude of over 2,760 meters. The cultural relics professionals discovered six groups and 16 rock paintings on the ground rock facing the southeast in the bottom of the valley. The paintings include deer, cattle, hunting patterns, etc., five of which are most prominent in the deer rock paintings. With a length of 6 cm and a height of 8 cm, the largest one has a tall horns and a well-proportioned body and limbs, with four legs slightly bending. There is a sucking deer in the abdomen of the dear (the male and female reindeers both have horns), with a running-like deer in front of it.

Hayatabad - Archaeologists in Khyber Pakhtunkhwa have discovered 2,200 years-old ancient metal artefacts from Peshawar’s Hayatabad neighbourhood. The Archaeology Department of the University of Peshawar in collaboration with the K-P Archaeology Department had been excavating the Hayatabad Phase V site for the last three years. The artefacts discovered include utensils, tools, and industrial items. The remains were traced back to the Sateen tribe, which dates back to the 2nd century BC. After three years of hard work, professor Gul Rahim of University of Peshawar and his team resulted in discovery of 2,200 year old relic of a Greek blacksmith’s workshop, which has been considered as the oldest of all workshops of the Greek civilization discovered in the area so far. “We had discovered coins, knives, smelting instruments of various metals, furnace, while we have also found relics of the Sikh, Mughal and Buddest eras items at the site, but we confirmed that it would be traced back to the Greek civilization” Prof Gul Rahim stated.

Makimuku  - Bones found in the Makimuku ruins in western Japan, assumed to be the likeliest site of the ancient Japanese kingdom of Yamatai, were from about 12 frogs in three species, say researchers. Since many peach seeds and fish bones assumed to be used in rituals were found in the same layer of soil dating to about the mid-3rd century, some experts have suggested that frogs were used as offerings to the gods. A total of 117 bones, allegedly from six Japanese wrinkled frogs, four Japanese brown frogs, and two Daruma pond frogs, were found in an oval hole examined during excavations in 2010. The hole, measuring about 4.3 meters wide, 2.2 meters long and 80 centimeters deep, was dug south of a ruin of a large structure built in the first half of the 3rd century. Some 36 bones had scratches and marks that suggested the use of some type of implement. Most of the marks were 1 millimeter or shorter. It is assumed that the scratches were made by humans in rituals, or by mice biting the bones. The actual cause has not been definitively identified. According to former Doshisha University archaeology professor Kazuhiro Tatsumi, who is knowledgeable about ancient rituals, pottery such as pots depicting frogs was created during the Jomon period (prehistory to about 300 BC) in the Chubu region, central Japan. Tatsumi says frogs were believed to be a sacred animal as they also appeared on bell-shaped bronze vessels made in the Yayoi period (c. 300 BC-300 AD).