Putlagudem - A new Buddhist site was discovered on a hilltop at a tiny village Putlagudem in Atchampet mandal on Sunday. The team found broken pillars of a Silamandapa in front of a dilapidated Venkateswara temple on the hilltop, which is called Bhairava Gutta. The six limestone pillars bore half lotus medallions on top and bottom. The carvings of friezes of animals and pattern designs on the pillars resemble Amaravati sculpture. According to Siva Nagi Reddy, the Buddhist site at Putlagudem dates back to the  1st century AD of Satavahana period. Because of its location on the hilltop, the site belongs to the Seliya sect of Buddhist Sangha. Some of the Buddhist pillars bearing half lotus medallions were used as door frames of the sanctum sanctorum of Venkateswara temple built on the hilltop some two centuries ago. Some of the pillars were appropriated as beams of the temple Maha Mandapam, which was recently demolished by treasure hunters. A broken Sivalinga and Nandi were also found at the Buddhist site.

Macroon - Archaeologists have discovered 30 previously unknown ancient sites along the proposed Macroom bypass route, including a Bronze Age ring fort. The sites have been discovered through ground penetrating radar along the two-thirds of the road’s 22km route corridor between Macroom and Ballyvourney and they will be excavated shortly. Deirdre McCarthy, resident archaeologist on the project, said she and her colleagues were “very excited” at the prospect of soon being able to carry out excavations.“To date, two thirds of the route has been tested and 30 previously unknown sites of archaeological potential have been identified,” said Ms McCarthy. “These sites include pits and postholes which may represent the remains of prehistoric settlement; a ringfort at Ballymakeera, an upstanding lime kiln and the most common site type identified to date, fulachta fiadh [burnt mounds].”She said that only the part of the ringfort which is within the road corridor will be excavated.A fulacht fiadh site normally consists of a large horse-shoe-shaped burnt mound of heat-shattered stone and charcoal, normally found in boggy areas close to steams. Mainly dating to the Bronze Age, when excavated the mound normally overlays one or more large pits, lined with stones or planks to create a trough. This is used to hold water into which heated stones are put. 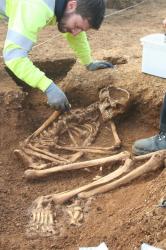 Bourton-on-the-Water - Scientists are ready to start an archaeological dig at an historic site, to help unlock the secrets of the past. The dig will take place at Greystones Farm in Bourton-on-the-Water, a site where people have lived and farmed for more than 6,000 years and is thought to be one of the first towns in Europe. During renovation work at the site, archaeologists discovered five skeletons, dating back to the Middle Iron Age meaning they are between 2,000 and 2,500 years old. “Previous excavations have shown the site was an important settlement in the Iron Age.

INDE – Vadnagar - Excavations by Archaeological Survey of India (ASI) at PM Narendra Modi's hometown Vadnagar to unearth the Buddhist past of the ancient city and chronicle its historic sequence has yielded exciting relics. Two seals bearing the name 'Anandpur' which ASI officials claim to be the first epigraphical evidence of the town's ancient name have been found during recent excavations. Earlier, state archaeology department had excavated a Buddhist monastery in Vadnagar and a number of other ancient artefacts. Excavation of seals has the experts buoyed. "The name Anandpur for the Vadnagar town is mentioned in literature and historic records. This is the first time that we have found sealing mentioning this ancient name," said deputy superintending archaeologist Dr Abhijit Ambekar who is in-charge of excavation at Vadnagar. The sealing numbers 4410 and 4411 found during the excavation reads 'Anandpura.. rajno..' (King of Anandpur) in Brahmi script. "Palaeographically it may be assigned to 2nd-3rd century AD," said ASI officials. Ambekar added that the discovery points and the fact that name Anandpur continued from at least 2nd-3rd century to the time Chinese traveller Hiuen-Tsangvisited it in 7th century. "The name also appears in the Kumarpal inscription in Arjunbari area of the town - indicating the name Anandpur continued for about 1000 years," he said.