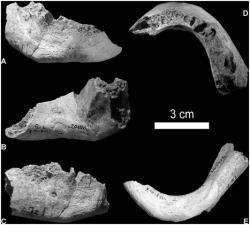 Riparo di Mezzena - The skeletal remains of an individual living in northern Italy 40,000-30,000 years ago are believed to be that of a human/Neanderthal hybrid, according to a paper in PLoS ONE. If further analysis proves the theory correct, the remains belonged to the first known such hybrid, providing direct evidence that humans and Neanderthals interbred. Prior genetic research determined the DNA of people with European and Asian ancestry is 1 to 4 percent Neanderthal. The present study focuses on the individual’s jaw, which was unearthed at a rock-shelter called Riparo di Mezzena in the Monti Lessini region of Italy. Both Neanderthals and modern humans inhabited Europe at the time. “From the morphology of the lower jaw, the face of the Mezzena individual would have looked somehow intermediate between classic Neanderthals, who had a rather receding lower jaw (no chin), and the modern humans, who present a projecting lower jaw with a strongly developed chin,” co-author Silvana Condemi, an anthropologist, told Discovery News. The genetic analysis shows that the individual’s mitochondrial DNA is Neanderthal. Since this DNA is transmitted from a mother to her child, the researchers conclude that it was a “female Neanderthal who mated with male Homo sapiens.” 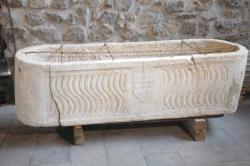 Amalfi - Amalfi authorities greenlit the restoration of a 4th-century sarcophagus and two 16th-century statues found in a former Capuchin monastery, officials said Tuesday. The sarcophagus was recycled in the 13th century by local aristocracy, who decorated it with their coat of arms, then used as an altar in 1934.  Probably made by a Cistercian monk, the two tuff and polychrome plaster statues come from the Puglia region, and were discovered in a cave in Amalfi's Capuchin convent. They represent Saint Peter and Saint John the Evangelist, and are part of a group of five characters that also includes Christ, an Angel and Saint Jacob . ''This shows the administration's will to invest in preserving the city's cultural assets'', said Daniele Milano, the town council member for tourism and culture.

PAKISTAN – Mansehra - The archaeologists working on the Higher Education Commission (HEC)-funded survey in Mansehra district have identified 30 new locations where the remains of the Buddhist era were traced for the purpose of further research. The newly-explored sites include the Buddhist era stupas in round and square shapes discovered in damaged condition, besides the Gandhara style graveyard at various locations.Dr Zainul Wahab, an archaeologist working on the survey of the archaeological sites in Mansehra, said the spots identified and outlined in the survey were full of information about the Buddhist civilisation. He added that further research might unearth a complete Buddhist complex in the area as the region is rich in the remains of the ancient Gandhara culture. He said the sites they had worked on could be compared with similar ruins in its display and uniqueness in other parts of Khyber Pakhtunkhwa. He added that they had worked on some newly identified sites in Chatter Kot and Javed Khan areas in the Oghi tehsil of the district. He expressed the hope that they would launch joint research work on the newly mapped archaeological sites .

ROYAUME UNI – Birmingham - First there was Richard III. Then, in the early hours of Monday morning, with the exhumation of bones from an unmarked grave at St Bartholemew’s Church in Winchester, archaeologists came closer to unravelling one of the great mysteries of British history – the burial place of King Alfred the Great. While the Winchester skeleton awaits scientific tests to see if it is Alfred, the ninth-century monarch revered for his victories over the Danes, speculation is now rife as to which historical riddle will be solved next. At least some of the smart money is on Boudicca, whose army led an uprising against the Romans and razed London in the first century AD.  Dr Mike Heyworth, the director of the Council for British Archaeology (CBA), said that experts are on the hunt for her burial place, at one point rumoured to be near what is now a McDonald’s restaurant in Birmingham, and he wouldn’t be surprised if she was unearthed in the next few years. There are contradictory but persistent tales (with “no element of truth”, according to the Museum of London) that she lies beneath either platform eight, nine or 10 at King’s Cross Station. Another archaeological grail is the final resting place of King Arthur, the location – not to mention existence – of which has been in dispute for centuries. He was connected to ruined Glastonbury Abbey, but some believe the story was concocted by monks. Dr Heyworth offered a starting point for investigators: “Cadbury Castle [in Somerset] was thought to be Camelot, and a lot of those tales are based on stories passed down to us, and often they’re based on truth, and that has to be tested with some sort of excavation. There are a lot of ideas and theories with someone of that status, and sometimes archaeologists don’t agree.”

USA –  Montclair - Montclair State Univesrity students recently teamed up with the local Historical Society to dig into Montclair's long past.  Students in the archaeological department conducted a minor excavation of the property behind the Clark House on Orange Road this weekend. The Historical Society — comprised of the Clark House, Israel Crane House and Nathaniel Crane farmhouse — is located on some of the first English farmland in Montclair, dating back to the turn of the 17th century. 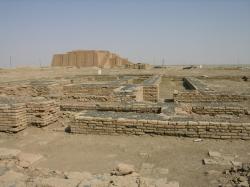 Ur - British archaeologists have discovered a previously unknown palace or temple near the ancient city of Ur in the first foreign excavation at the site in southern Iraq since the 1930s. A small team of archaeologists working from satellite images hinting at a buried structure have uncovered the corner of a monumental complex with rows of rooms around a large courtyard, believed to be about 4,000 years old.  “The size is breathtaking,” says Jane Moon, a University of Manchester archaeologist who heads the expedition. Ms. Moon says the walls of the structure are almost nine feet thick, indicating that the building was of great importance or indicated great wealth. The discovery is even more significant because of its location more than 10 miles from Ur, on what would then have been the banks of the Euphrates River – the first major archaeological find that far from the city.  Ur, the last capital of the Sumerian empire, was invaded and collapsed in about 2000 BC before being rebuilt. The city was dedicated to the moon god and is famous for its ziggurat (a stepped temple). Many believe it is the birthplace of the prophet Abraham, known as the father of monotheistic religion. 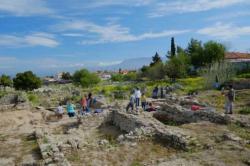 Corinthe - Excavations in Ancient Corinth by the American School of Classical Studies at Athens began for a sixth season in the area south of the South Stoa with the aim to clarify the Late Roman levels beneath Byzantine and Frankish structures in the area. Three separate training sessions will be held for School members, who comprise both seasoned archaeology students as well as philologists, classisists and historians. Students will also be working on related projects in the museum. Roasana Valente is serving as field director.  Conservation work on the Frankish area will also continue in parallel. 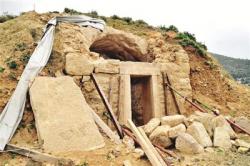 Bodrum - A two-room grave has been discovered in the Aegean province of Mugla’s city of Bodrum. The grave is thought to date back to the Roman period, and was found during construction work on Salvaraga Hill behind Bodrum Port two months ago. An investigation carried out by the Bodrum Museum Directorate revealed that the grave had been robbed and a rescue excavation was initiated by museum officials. A piece of gold leaf found in the grave has been transferred to a museum.  Officials said that the grave was probably robbed in the Roman period. After a restoration project. it will be restored and opened to the public.