Mt. Ebal - Researchers say they have deciphered a 3,000-year-old formulaic curse inscription recovered on a small, folded lead amulet found on Mount Ebal, making it the oldest proto-Hebrew text ever found in Israel. In the 23-word English translation of the inscription, the word “curse” appears 10 times and the word “YHWH,” the biblical spelling of God’s name, appears twice, the Associates for Biblical Research (ABR) said in a press conference. “Cursed, cursed, cursed – cursed by the God YHW. You will die cursed. Cursed you will surely die. Cursed by YHW – cursed, cursed, cursed.” The scientists used advanced tomographic scans to recover the hidden text to enable the deciphering of the proto-alphabetic inscription. These types of amulets are well known in the Hellenistic and Roman periods, but Zertal’s excavated pottery dated to the Iron Age 1 and Late Bronze Age, so logically the tablet derived from one of these earlier periods.

Çitli – A man plowing his farm in Turkey’s central Çorum province discovered a rare 3,300-year-old ancient bracelet from the Hittite era. The beautiful bracelet is made out of bronze, nickel, silver and gold and is adorned with depictions of Hittite symbols, including imagery of the Itar/Auka and his servants Ninatta and Kulitta. Resul Ibiş, an archaeologist at the museum, told Ihlas News Agency (IHA) that the bracelet has been put on display for visitors. “After initial evaluations, we realized that this piece is unprecedented and we’ve never seen anything like this before,” he said, adding that it is from the 13th century B.C.

El Mnasra / El Harhoura 2. The olive tree was an iconic plant for most of the past Mediterranean civilizations, for which it had important economic value. Here we report the earliest use of fruits and wood from olive trees in Africa so far, around 100,000 years ago. These findings suggest the presence of olive trees on the Atlantic coast of Morocco during most of the last glacial period, and the use of olives by the early Homo sapiens for fuel management and most probably for consumption.

Tenochtitlán - Researchers from Mexico’s National Institute of Anthropology and History (INAH) discovered a 700-year-old offering to the war god Huitzilopochtli at the Templo Mayor, which was located in the Aztec capital of Tenochtitlán. The offering was made during the expansion of the temple undertaken by the ruler Ahuizotl, who took the throne in 1486 and doubled the size of the Aztec empire. The offering included 164 Nidorella armata, a creature also known as the chocolate chip starfish for its light color and dark spots. The species lives in shallow waters along the Pacific coastline from Mexico to Peru, beginning about 180 miles away at the eastern end of what was once Ahuizotl’s empire. Chunks of coral in the offering traveled to the capital from the western end of the Gulf of Mexico, at the opposite end of the empire under Ahuizotl’s expansion. Marine shells, puffer fish, and a resin figurine of a female jaguar holding an atlatl were also found in the deposit.

Lifford - Two more boats, understood to be from the medieval-era, have emerged from the River Foyle. The boats, known as logboats or dugout boats, were found at a "dugout boat hotspot" near the Lifford Bridge. The bridge connects the towns of Strabane in Northern Ireland and Lifford, in County Donegal in the Republic of Ireland. Marine archaeologist Dr Niall Gregory said the two boats now bring the total number found at this particular section of the river to 15. Overall, 21 such boats have been found at the confluence (meeting point) of the rivers Mourne and Finn into the River Foyle. Logboats are made from hollowed-out trees and can vary in size depending on the tree trunk used. These two boats found at the Lifford Bridge site were cargo ferry boats. These boats were designed as work horses, to move and manoeuvre with some degree of agility within a moderate to strong current. Logboats are "notoriously difficult" to date based upon hull size and shape alone, and carbon dating is the only definitive means of obtaining a conclusive date. Dr Gregory estimates - based on the hull shape, use of medieval nails, distorted wood grain and remains of sapwood on the exterior - that they are of a medieval-era. Previous boats found at the site have been dated from between 600 AD to 1520 AD, he said.

INDE –  Maligaimedu - A 25-centimeter-tall clay pot and a brick structure were found during excavation at Maligaimedu near Gangaikondacholapuram. An official said, "Twenty days ago, a broken bracelet weighing 7.92 gm and 4 mm thick, and made of copper and gold was found at the site. Following this, a broken clay pot was dug out. It is 25 cm in height and has a diameter of 12.5 cm. We are excavating a Chola palace. So, this pot might belong to the Chola period. We also found a brick structure with 22 layers, which is one metre in length. Excavation is in progress and more things are likely to surface. Until now, several ancient items, including iron nails and chinese pottery, have been found here and all of these have been safely stored." Huaca Las Ventanas - A funerary bundle discovered in a tomb from the Middle Sicán period (900-1050 A.D.) at the Huaca Las Ventanas archaeological site in the Lambayeque region of Peru, has been found to include a set of surgical tools indicating the deceased was a surgeon.  Inside the bundle was a gold mask painted with cinnabar, a large bronze pectoral, gilt copper bowls and a poncho-like garment with copper plates. Under the poncho was a pottery vessel with a double spout and a curved bridge handle with a small figure at the apex representing the Huaco Rey (Huaco King). The surgical kit was of particular interest to archaeologists. It is large, containing a full set of awls, needles and knives of various sizes and configurations. There are about 50 knives in total, some with a single cutting edge. Most are a bronze alloy with high arsenic content. Some have wooden handles. There is also a tumi, a ceremonial knife with a half-moon blade. By the tumi was a metal planchette with a symbol associated with surgical instruments. Two frontal bones, one adult and one juvenile, were found next to the planchette. Marks on the bones indicate they were deliberately cut with trepanation techniques. This confirmed that the tools were intended for use in surgery. A piece of bark from an unknown tree found in the bundle may have been used for medicinal purposes as an analgesic or anti-inflammatory infusion the same way white willow bark makes what is basically aspirin tea. 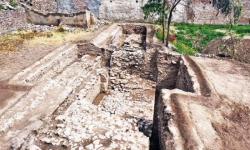 Bazira - Archaeologists claimed to have discovered the secondary gate of Bazira city and some unique artefacts during fresh excavation in Barikot, Swat. According to archaeologists, the city was captured by Alexander in 327 BCE during his Indian campaign. Bazira is located in Barikot tehsil about 20-kilometre away from Mingora. “We discovered the secondary gate in the south-western stretch of the city wall that gave the ancient visitor access to the main street of the south-western neighbourhood of the city. This evidence enriches our knowledge on the history of the urban layout of the city of Barikot from the Indo-Greek to the Kushano-Sasanian period,” Dr Elisa Iori told. She said that a large quantity of materials of different kinds were found that included coins, Kharosthi inscriptions on pottery, beads for bangles and necklaces, terracotta figurines and several relief’s fragments, representing the life of Buddha. She said that one of the most peculiar recoveries was that of a large-sized right-spiraling ritual conch shell (about 15-centimetre long). It was found during the excavation of the Buddhist temple.

CHINE –  Sunjiagang - A dozen stone weapons have been unearthed from a site dating back between 3,800 to 4,200 years in central China's Hunan Province. The Sunjiagang site, located in the northwest of Dongting Lake Plain, dates back to the late Neolithic Age to the early Xia Dynasty (around 2070-1600 BC).  The stone weapons found at the Sunjiagang site in Lixian County include spears and arrows. The relics indicate that the relationship between different communities in the area might have been relatively tense, and violent conflicts or wars occurred. Recent archaeological excavations also revealed a new form of residence at the Sunjiagang site, which is a simpler form of residential architecture.