Manitoba - Two little piles of stones surrounded by scrub pine in northern Manitoba may have given archeologists and historians a physical link to one of North America's greatest explorers and map-makers. Archeologist Perry Blomquist believes the rocks at Sipiwesk Lake on the Nelson River are remnants of chimneys from the post and storehouse that was David Thompson's first venture as an independent fur trader. Around them, Blomquist found more than 1,000 artifacts that he says prove it is the trading post that has been "lost" since it was first discovered by Joseph Tyrrell more than 100 years ago.  Tyrrell is the Canadian map-maker and geologist famous for his dinosaur discoveries in Alberta. But he was also a student of Thompson's life and searched for traces of the renowned explorer.  Thompson is known for trailblazing and mapping through what was then a part of North America largely unexplored except for the aboriginal people who lived there and helped guide him on his journeys.

Santa Fe - Archaeologists excavating around San Miguel Mission in Santa Fe have found everything from animal bones and pre-Columbian artifacts to a quarter-real Spanish coin from the 1820s and a 20th century school-tax token. San Miguel Mission is known as the oldest church in the United States. It was built in 1610, destroyed by fire in 1640, rebuilt in 1645, destroyed again in the Pueblo Revolt of 1680 and rebuilt again in 1710. Archaeologists Alysia Abbott and Elizabeth Oster supervised the excavation of a 75-foot trench on the south side of the church. The trench will allow water from the roofs of the mission and adjacent buildings to flow into a storm sewer. As expected, the excavation turned up human remains, according to the Santa Fe New Mexican. Most were disarticulated bones, which indicated they had been disturbed by previous excavations for utility work, Oster said. A nearly complete skeleton was also found, but it was not known whether the person was Native American or of European descent.  What has been found are pieces of Santa Fe black-on-white pottery from the 1300s, Tewa polychrome pottery from a more recent era, ceramics with the imprints of corncobs and a tiny Pedernal chert dart point used to hunt birds. One intriguing item blends Old and New World technology: a whorl or disk from a Native American hand spindle, made from a piece of talavera pottery. 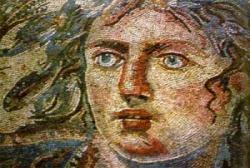 – Idleb - Museum of Ma'arat al-Nu'man, in the northwestern city of Idlib, includes more than 2000 square meter of the ancient mosaic, displayed for the tourists, in addition to 400 square meter of stored mosaic. Supervisor of the Museum, Ahmad Gharib told  that due to the narrow area of the storehouses, there are 3 mosaic panels, each of 700 square meters that were unearthed in the southern towns on Ma'arat al-Numan. The panels are kept at the owner of the house where they were discovered. The Museum, built in 1974, was dedicated to be a khan with its sections and occupies an area of 7000 meters. The Mosaic panels were displayed in the 4-paviliions museum with legendry topics. In the Museum corridors to the east and south, several historical pieces, restored from Canada of al-Ma'ara origin, have been shown. Heroic scenes and wars like the panel of Heracles have been shown as well as scenes of the paradise and hunt. The northern part of Syria includes the most important panels of mosaic according to the modern historical discoveries. (SANA)

- ISRAËL - Jaffa - The Israel Antiquities Authority has established that the tombs uncovered in the area of the French Hospital near the Andromeda housing complex in Jaffa are not Jewish. This was announced after an examination of the site revealed that the burials contained pig bones, allowing archaeologists to conclude that they were not Jewish burials. The tombs were discovered during construction of an underground parking garage for a five-story hotel that is to be built on the site. The authority's announcement means that the developer can now go ahead with the work. Yossi Levi, the authority's archaeologist for the central district, said: "It's easy to identify the characteristics of Jewish burials. These are clearly not the burials of Jews; we have no doubt about it.  "We found tombs from three periods: the Persian, the Byzantine and the Muslim. Crosses were carved at the entrance to two tombs. Some of the funerary offerings included parts of the jaw bones of pigs, which was very common to pagan burials. Everything we know tells us that these were not Jewish burials." Rabbi David Shmidel, head of Atra Kadisha, the group behind the protests at the site, rejected the antiquities authority's conclusions. "We assume that the people buried here were Jews, and so we are going to continue the struggle-"

From grand canals and railways to humble harbour walls and overgrown lime kilns, the industrial history that is scattered across our landscape is a rich legacy that forms a vital part of our culture – but is the all-important heritage that tells the story of a nation at work falling apart at the seams? It is the question English Heritage will be asking in a major project it has just launched to find out how much of our physical history is in jeopardy of neglect, decay or even demolition. "The South West region contains a staggering wealth and diversity of historic industrial sites," said English Heritage's regional director, Andrew Vines. "These range from the metal mines of Cornwall and Devon and the mills of the Westcountry textile industry to the magnificent structures and buildings on the region's canals, railways and docks. "Everywhere one looks in the South West there are canals, railways, warehouses, brick works, potteries, breweries, gas works, wind and watermills, ports, docks and harbours – and other innumerable remains of the Industrial Revolution, that great era spanning from 1750 to the First World War, when Britain led the world. "But much of this industrial heritage is now at risk and the current economic climate isn't helping," added Mr Vines. "Owners are finding it hard to look after the needs of their buildings as well as their businesses. Developers are cautious about taking on vacant industrial buildings and public bodies and regeneration agencies are less able to support schemes for re-use. "There are no easy answers. But we're determined to see what can be done to help. Our industrial past is too important to ignore."