Nunavut - They are among the smallest artifacts recovered from the recent dive to HMS Erebus, but the two brass tunic buttons are also offering the most personal glimpse yet into what mysteries the shipwreck may reveal about the ill-fated Franklin expedition in the High Arctic. The buttons found during the under-ice exploration of the wreck in mid-April, as it lay in the shallow waters of Wilmot and Crampton Bay off the coast of what is now Nunavut, certainly don't answer the big questions about how Sir John Franklin's quest to find the Northwest Passage came to its tragic end nearly 170 years ago. But because the buttons may come from the uniform of a non-commissioned officer of the Royal Marines, underwater archeologists and others delving into the Franklin saga may be able to narrow them down to one of only four of the 129 men lost on the expedition. No human remains have been spotted, but archeologists have found Franklin's cabin, and seen that some materials from it have dropped down onto the sea floor. 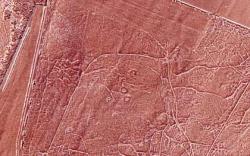 Caithness - Airborne laser scanning and light detection techniques will be used by archaeologists who believe early evidence of prehistoric circle-huts is the “tip of the iceberg” across the heritage landscape of Caithness in north-east Scotland. Ahead of the launch of a community archaeology project taking Bronze Age artefacts as a starting point, organisers at the Castletown Heritage Society say they “can’t wait” to begin a series of surveys and excavations making the most of “cutting-edge” technology. It has identified extensive and previously unrecorded traces of prehistoric settlement and agriculture in a previously unrecognised component of the Caithness landscape. “The unrecorded archaeological remains include traces of what can be termed the ‘hut-circle landscape’, usually made up of Bronze and Iron Age settlement and subsequent veneers of Late Iron Age and later occupations and land-use. “The only hut-circle excavated in Caithness, lying in the hinterland around Loch Shurrery, dates from the 4th century BC. “However, significant clusters of agricultural remains and associated structures surrounding chambered cairns would suggest the possibility of domestic activity relating to the period of their use, in the Neolithic and Bronze Ages. “As such, this project offers the opportunity to investigate the daily lives of the people who built some of prehistoric Europe’s most sophisticated burial chambers.
http://www.culture24.org.uk/history-and-heritage/archaeology/art527610-archaeologists-to-begin-search-for-prehistoric-hut-circle-landscape-in-north-east-scotland

INDE - Damroo - In a major discovery the archaeological department has found Buddha foot prints, used for worship, during an excavation at village Damroo in Baloda Bazaar-Bhatapara district, about 60 km from here. The find assumes importance as such Buddha foot prints had not been found anywhere in central India up to now.  Damrooo is situated on the banks of river Shivnath and provides uninterrupted cultural sequences to the early historical chapter of Chhattisgarh. Archaeological excavation at the village has opened some new aspects in the history and archaeology of the state. There are three big mounds here that contain potteries of black ware, red slipped ware and fine fabrics. The site is surrounded by a circular rampart, or mud fort, popularly known as garh.  Speaking exclusively to TOI with regard to the recent findings at Damroo, director, archaeology Rakesh Chaturvedi informed that the mud fortification at Damroo measures about 370 south-west and 460 m east-west, with a maximum height of about nine m from the present surface. The western part of the site is vandalised by local residents.  This is the first mud fort site that was excavated by the state archaeology department under direction of Dr SShivkant Bajpai and Rahul Singh. The excavation is being carried out here since 2013 and has yielded several antiquities ranging from early historical period to later Gupta period. Last year early Brahmi inscriptions on terracotta tablets were found here in bulk quantity.

Leicester - Leicester may have covered itself in glory with the discovery of Richard III but there are hopes of finding yet another celebrated figure in the city. Cardinal Wolsey was Henry VIII’s right-hand man during the early part of his reign, to the extent some historians claim he ran the country while Henry played. Probably the son of a butcher, Wolsey’s sharp intellect brought him riches and power both in the Church and at Court. Yet he tumbled from grace when he was unable to procure Henry the annulment he needed to marry Anne Boleyn. He died at Leicester Abbey and archaeologists and historians hope they may find his body in the city.