Llanos De Mojos - The pre-Columbian Amazon rainforest is believed to have supported millions of people. Besides the well-known Inca civilisation, many more peoples are thought to have inhabited and shaped the land to suit their needs, needs far removed from today's societies. While a number of the cities and towns left behind have been found still more are hidden and yet to be uncovered. One of these large settlements was recently unearthed deep inside the Bolivian jungle, in the Llanos De Mojos region. According to BBC Science Focus magazine, which reported on the fresh discoveries, "massive urban landscaped" have been uncovered by helicopters kitted out with LIDAR technology. Hidden within the vegetation, a number of "remarkable" settlements believed to have belonged to the Casarabe Culture (existing from around 500 to 1400 AD) in the Llanos de Mojos savanna forest have been digitally deforested. One of these settlements is believed to have been abandoned 600 years ago. It is around 500 metres long and made up of stepped platforms. On these platforms lie rectangular and U-shaped mounds, and a pyramid thought to be nearing 200 metres in height. This settlement is just one in a network that stretches some several kilometres.Using the helicopters, the team found the size and shape of 26 settlements, including 11 they had not been looking for. Two of the urban centres covered an area of more than 100 hectares. The LIDAR images showed walled compounds with brand terraces rising six metres above the ground. And, conical pyramids made of earth towered above some of the terraces. According to Nature, people likely lived in the areas around the terraces and travelled along the causeway networks to move between sites. Why the settlements were ever abandoned after 900 years remains a mystery. Radiocarbon dating suggests the Casarabe disappeared around 1400.

Poole Bay - A shipwreck dated to the thirteenth century through tree ring analysis of wood in the hull has been uncovered in Poole Bay, which is located off the coast of southwest England. The rare wreckage was spotted after a storm by a local charter boat skipper. Maritime archaeologist Tom Cousins explained that the combination of low-oxygenated water, sand, and stones helped to preserve one side of the clinker, a type of vessel constructed with overlapping planks of wood. This vessel, constructed with oak grown in Ireland, carried a cargo of Purbeck stone, which comes from Dorset’s Isle of Purbeck. This type of stone, which can be highly polished, was used in Gothic architecture in Britain and continental Europe. A cauldron for cooking, large Purbeck stones for grinding grain, and Purbeck gravestone slabs were also recovered. One of the gravestones was engraved with a wheel-headed cross in early thirteenth-century style, while the other had a splayed arm cross, which was popular in the mid-thirteenth century. It had not been known that the two styles were in use at the same time, said Brian and Moira Gittos of the Church Monuments Society. The gravestones are thought to have been carved at a local quarry or workshop.

- A beautiful bronze coin almost 2,000 years old has been rescued from the depths of the Mediterranean off Israel during an underwater archaeological survey, the Israel Antiquities Authority announced on Monday. The coin shows the emperor on one side, as befits coinage of the time, and Cancer, the crab sign of the zodiac and a lady on the other – interpreted as the moon goddess Luna. The crab coin bears the date “Year eight,” referring to the eighth year of rule by the Roman Emperor Titus Aelius Hadrianus Antoninus Pius. That eighth year was either 144 or 145. It belongs to a series of 13 coins, one for each sign of the zodiac and one the complete zodiac wheel, the IAA said. The other side shows the profile of the Gaul-born Emperor Antoninus Pius, one of the so-called “five good emperors” who did not pursue military glory and booty but ruled in peace, which may explain the paucity of historical records from his reign. He did put down a rebellion in Britain, but is better remembered for his encouragement of culture through building temples and theaters – and promoting science, which has not found support for astrology in any way. The moon goddess Luna is a more ephemeral character in the annals of Roman religion, sometimes perceived as part of a triumvirate of goddesses with Proserpina and Hecate and sometimes as a stand-alone deity. The crescent on the coin is her symbol.

Mijas  - Archaeologists working on the second phase of the general research project of the excavation of the Cortijo de Acebedo in Mijas have unearthed several new findings, including another Phoenician funeral urn, known as a ‘black cross’.The latest stage has also uncovered more tombs, bones and utensils. However, as with the last urn, which was discovered in May, no remains were found inside the urn. Archaeologists believe that, although it is still too early to draw conclusions, the latest black urn found in this second phase of research could support the theory that this type of container was used for herbs or lichens used during a funeral ritual, a line of research so far undocumented. The site, located at the foot of the old marine estuary of the Fuengirola river, is the westernmost Phoenician necropolis in the province of Malaga and dates between the seventh and sixth centuries BCE. The excavation of the area, considered one of the most important in the province of Malaga, is continuing to produce surprising results.

Vinh Loc - A citadel from the Ho Dynasty, located in Vinh Loc district of Thanh Hoa province, was listed as a World Cultural Heritage site by UNESCO in 2011 due to its huge stone walls, which are a unique architectural construction in Vietnam and neighbouring countries. More recent digs at the excavation site have revealed traces of the King's Royal Path, or Ngu Dao. Archaeologists found evidence of a green stone embankment and slate paving in the middle of the southern gate, which they believe are remnants of the royal path. Along the royal path, archaeologists unearthed numerous significant architectural remnants and relics during excavations. Particularly, parts of the Dragon architectural cluster are deemed significant architecture and are regarded to be the key to locating the Ho Citadel's main palace. They also found many types of decorative bricks with patterns of chrysanthemums, lotuses and gerberas from the Ly-Tran dynasties, flower strings of the Le Dynasty, and various types of square, rectangular, and decorative bricks printed with Chinese characters. 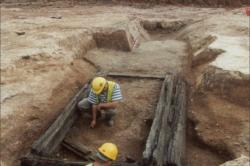 Wellington - Excavation work in a Herefordshire quarry this week has revealed a spectacular relic from the past. Archaeologists working in Wellington Quarry uncovered the remains of two Anglo-Saxon watermills. The water mills were discovered in waterlogged gravels at the quarry. A Hereford Museum spokesman said estimated one of the mills to be early 9th century, while the other is dated around 700AD..It was probably still functioning when Offa was King of Mercia, between 757 and 796.