ROYAUME UNI - North Tyneside -Secrets uncovered during an archaeological dig are to be revealed. A community archaeology project in North Tyneside was set up within Northumberland Park to investigate the remains of the medieval St Leonard's Hospital. Another dig in the area is due to take place this summer.

Kephalonia - Since last Sunday, the Minister of Culture and Sport Mr. Panos Panagiotopoulos and the Secretary General for Culture Ms. Lina Mendoni, are in an open and constant communication with the local authorities of the Island of Kephalonia, in order to address the problems caused by the recent eartquakes to many of the Island’s cultural heritage sites.The current situation regarding Kephallonias monuments is described as follows:

- The walls of the Museum of Argostoli’ s building present significant problems. A report by experts is on standby.

- The Museum’s permanent antiquities display presents problems, as 40 vessels moved from their position. Many seem broken or opened along earlier cracks. A group of restorers has already been sent over from Athens to record the damages.

- A section of the wall near the gate of the Castle of St. George has collapsed, preventing access to the site.

- Cracks occurred in several Byzantine monuments surviving in villages such as Saint Thecla, Saint Dimitrios, Aghios Spyridon, Saint Theodore, Panaghia Phaneromene. Other monuments are being examined by members of different Ministry of Culture services, wherever the roadway condition allowes. The curches at Roggoi and Soulaoi have also suffered damages.

Capo Colonna - Police on Tuesday arrested a 34-year-old man as he was trying to abscond with artifacts from Capo Colonna Archaeological Park near Crotone, a port city facing towards Greece in the southern Calabria region. The would-be robber, who was identified by the initials I.F., was caught by a metal detector as he attempted to leave the 30,000-square-meter-park on a promontory overlooking the Tarentine Gulf with his loot. The Capo Colonna park houses several ongoing archeological digs as well as a Doric column that once was part of a temple to the goddess Hera dating back to the 6th century BC. The temple was one of the most important religious locations in Magna Graecia, the name given to coastal areas of southern Italy that were extensively colonized by Greek settlers in antiquity. The park also has a museum built into the earth to limit its environmental impact. Divided into three sections (The Earth, The Sacred, and The Sea), it houses recovered underwater artifacts, votive objects and structural ruins from the temple.
http://www.ansa.it/web/notizie/rubriche/english/english.shtml

Columbia - Archaeologists exploring the site of a Civil War-era prison camp in Columbia have uncovered three pits they say Union soldiers dug as crude shelter against the winter of 1864-65. One of the earthen pits on the grounds of the S.C. State Hospital held secret a half-dozen artifacts, too, left behind by a prisoner of war and then covered over by those who ran the prison known as Camp Asylum. The items included: a button made of brass and embossed with an eagle, a straight pin visible in the dirt only because its copper had turned bright green, a rubber moustache comb to remove lice, an iron mug, a fragment of woolen fabric that lead archaeologist Chester DePratter said was sky blue, likely the swatch of a Union uniform. 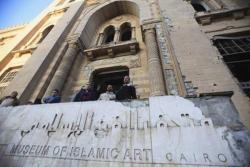 Le Caire - The façade of the Museum of Islamic Art in central Cairo has been seriously destroyed by a powerful car bomb that exploded outside the adjacent Cairo Security Directorate early on Friday morning. The blast also destroyed the façade of the nearby Egyptian National Library and of the Ministry of State for Antiquities’ Archives building.According to a report by the Egyptian Ministry of Health, four people were killed and at least 76 were injured.Minister of State for Antiquities Mohamed Ibrahim, who inspected the museum to assess damages,  confirmed that the blast had destroyed the façade of the building, which had featured rich patterns and elaborate decoration in the Islamic style. The columns at the front of the building have also been destroyed. “The museum building is in a real mess,” said Ibrahim, describing the interior of the museum as ”topsy-turvy.” According to Ibrahim’s account on Ahram Online, a number of ceilings inside the building collapsed, and some artefacts were damaged. The Minister also told the CBC TV channel that a large number of antiquities were destroyed as a result of the explosion, adding that glassware pieces were the most affected. Security Director of the Egyptian National Library and Archives Emad al-Qahwagy told Youm7 Friday that the explosion damaged the water pipes of the museum. This led to the destruction of many manuscripts whose protective glass cases were broken, by water. 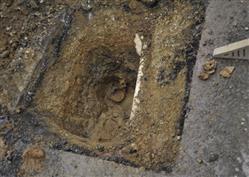 Huntingdon - Anglian Water engineers dug up more than they bargained for when they started work on a leaking pipe in Huntingdon town centre - they found a human skull in the trench. Archaeologists were been called in to examine the remains which were discovered beside Walden Road at lunchtime on Monday and work was halted while investigation was carried out. The skull and other bones in the trench are believed to be 600-700 years old and from a medieval burial site.