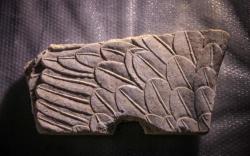 Amphipolis - Indications that a huge tomb being excavated in Ancient Amphipolis, northern Greece, could have a gateway leading to a fourth chamber have not been confirmed by the dig, the Culture Ministry’s general secretary Lina Mendoni said on Tuesday. Archaeologists working in the tomb’s third chamber thought a gap in the wall could lead to a fourth vault but the dig revealed a marble stanchion had been removed from the spot, Mendoni said. Meanwhile authorities released a video showing details of the third chamber’s intricate mosaic floor and photos of the wings of marble sphinxes found on the site. The discovery of the fragments mean the sphinxes can restored, the ministry said. 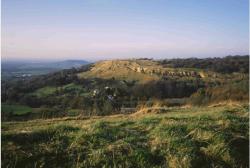 Crickley Hill - The site of the battle of Crickley Hill, near Gloucester, which took place more than 5,000 years ago between rival tribes, was in danger of being destroyed through erosion caused, largely, by rabbits. The National Trust put up fences to stop erosion and back filled rabbit warrens to preserve the iron age hillfort. Archaeologists said a major battle took place there in around 3,600BC, and the site was placed on the Heritage At Risk register until this year. 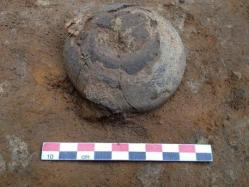 Pompéi - Archaeologists say they have found the remains of dozens of pieces of pottery in their raw clay form in what was once a ceramics workshop near ancient Pompeii's Herculaneum gate. The vessels, sealed under ash from the fiery eruption of Mount Vesuvius in 79 AD, have been catalogued for study by scholars interested in the daily life of Pompeii, including numerous artisanal workshops.The find has been called "surprising" and provides more insights into daily life in the city of Pompeii just before disaster struck, preserving the entire ancient city in ash. The clay vessels, which were to be used as drink or food containers, are the result of work just outside the ancient city walls near the Herculaneum gate where it is believed workshops and even cemeteries were located. The furnace was discovered in 1838 and the space nearby is believed to be a working room for creating pottery and described as important to the understanding of ceramic techniques of the period. In a separate workshop, two furnaces were found and are also thought to have been used for producing fine ceramics with thin surfaces.
http://www.ansa.it/english/news/lifestyle/arts/2014/10/28/raw-clay-pots-from-pompeii-studio-found_5c55b011-7f61-46e3-b71a-f6c093f2f88c.html? 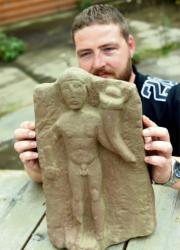 Papcastle - Artefacts dating back as far as the first century AD have been uncovered by a team from a Carlisle-based company, including a complete statue of what’s thought to be a Roman fertility god. They were working at Papcastle, near Cockermouth, having been drawn to the area after the devastating floods of 2009 revealed traces of Roman remains. An excavation was then launched which uncovered an integral part of the historic town, including the bridge that crossed the River Derwent, and traces of a ritual site. The fertility god, called genius loci, is thought to be the guardian of the area.

INDE - Gopakpattan - The Goa government had approved in the early 1990s a project for an underwater exploration in the ancient port of Gopakpattan, but the study that may have uncovered vital clues to the former capital's glorious past was shelved for lack of funds.The ancient port, with its known limits roughly from Kharosaiwado in Goa Velha to an area 4km south near Zuari bridge, was a natural harbor for the large fleet of ships maintained by Kadamba kings after they shifted to Gopakpattan from their capital of Chandor.Historical evidence indicates that the port may have come into prominence during the rule of Silharas, as they held sway on the western board. But it further developed after Jayakeshi 1 (1050 AD - 1095 AD) set up his capital here.Gopakpattan is known to have had commercial links with other ports such as, Sinhala, Callah, Zanjibar, Pamdu, Chanda, Bangala, Gurjara, among others, but faded into relative obscurity after the downfall of the Kadamba dynasty.The port area and its surroundings along the 8km stone-paved road from Agasaim to Old Goa are dotted with several vestiges of the past. "These include the port wall, damaged sites and broken relics of temples. The port may have even stretched from Siridao to Agasaim," says Sakhardande.

Scarborough-The Scarborough Harbor project is being led by Kroum Batchvarov, lead archaeologist at the American Institute of Nautical Archaeology and Assistant Professor of Maritime Archaeology at the University of Connecticut.His team has already done extensive work on the site at Rockley Bay, Tobago and will return in May 2016 to undertake further excavation of the 17th century artefacts from the 1677 Franco-Dutch naval battle.