Wrexham - Two gold artefacts thought to be around 3,000 years old have been found near Wrexham. The Late Bronze Age hoard of two 'lock' gold rings were discovered in the Community of Rosset. The wearer would've been a person of wealth and status within Late Bronze Age Society, between 10000 and 800BC. In terms of their use, archaeologists aren't certain whether they were used as ear-rings or worn to gather locks of hair, as the name suggests. In Wales, lock-rings have previously been found at Gaerwen, Anglesey, the Great Orme, Conwy and Newport, Pembrokeshire. This largely coastal pattern hints at possible trading and communication links between Late Bronze Age communities living in Wales and Ireland.

Nefyn – A skeleton belonging to a woman from the early medieval period has been discovered by archaeologists under a church in Nefyn. The remarkable find was discovered at St Mary’s Church in Nefyn. Excavation work began in the winter of 2013 at the site by C R Archaeology, which uncovered some exciting remains from Nefyn’s medieval and even prehistoric past. The most exciting find to date has come from a series of large stones which were found at a meter below the church foundation level. Archaeologist Matt Jones of C R Arch aeology immediately recognised that these were most than likely the capping of a stone cist grave (a stone lined burial). Archaeologists were amazed to find the tomb and, when it was lifted, there was a skeleton within the grave — a rarity in Wales due to acidic soil conditions. Mr Jones said: “These remains were sent to an osteologist for further study and it was revealed that the Nefyn skeleton was that of a woman in her 60s, and that she was in relatively good health before she died — although the bones did exhibit some signs of arthritis. “This type of grave is generally believed to be early medieval in date, however, when this individual was radiocarbon dated, she was found to have been buried sometime between 1180 and 1250 AD, making the Nefyn lady the latest known burial of this type in Wales, and one of only a small number of a similar date in the UK.”

CHINE – Yanghai - Archeologists have found the oldest processed wheaten food remains ever unearthed in the country, indicating people ate bread-like food 2,600 to 2,900 years ago. Yang Yimin, associate professor with the University of the Chinese Academy of Sciences, said Thursday that his team has used infrared scans to screen the food remains, which were discovered in pottery wares unearthed from Yanghai Cemetery in north China's Xinjiang Uygur Autonomous Region. "The ingredients were mainly flour made from barley and millet. It was also mixed with lactobacillus and yeast," he said. The food was made in a period between China's Western Zhou Dynasty (1046-771 BC) and Spring and Autumn Period (722-476 BC). Yang said the discovery showed wheat became an important staple food in Xinjiang for that period. Food decomposes quickly and is rarely found at archeological sites. However, the remains were preserved at Yanghai Cemetery because of the extremely arid climate in the Gobi Desert, south of Huoyan (Flaming) Mountain in Xinjiang's Turpan Basin, which is known for its extreme heat in day time. There are more than 500 ancient tombs found in the cemetery, which covers an area of 54,000 square meters. Archeologists often find rare relics such as well-preserved trousers with a stitched crotch, believed to be worn by early nomadic minority people living in Xinjiang. Yang said the most findings would not only lead to better ancient food processing methods, but also better information on the role Xinjiang played in influencing China's cuisine and diet. Among the major grains for ancient China, only Chinese millet originated from the central Yellow River region, while rice was domesticated in southern China regions. Wheat and soybean, which were generally believed to have been originated from Central Asia, were cultivated in China's northwest region. More and more archeological research shows wheat cultivation in China first started in Xinjiang and then spread to Qinghai and Gansu provinces, which further suggests Xinjiang's important role in linking China with the West. 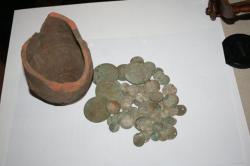 Zahari Stoyanovo - A man has stumbled upon an earthen jar with about 90 silver coins from the 16th-18th century whileplowing a field with a tractor in the town of Zahari Stoyanovo, Popovo Municipality, in Northeastern Bulgaria.The Popovo Museum of History has announced that earthen jar contained Western European and Ottoman silver coins are dated back to the 16th-18th century, when Bulgaria was part of the Ottoman Turkish Empire. The coins have holes in them meaning that they were most likely placed on a string and worn as a necklace – a popular women’s decoration in the past. Neither a more precise dating, nor the value of the Western European and Ottoman coins have been established with certainty, and the silver treasure from Bulgaira’s Zahari Stoyanovo is yet to be studied by archaeologists and numismatists.