- ITALIE – Raguse - A sensitive restoration and renovation project in southern Italy is soon to be undertaken by HOK London in an effort to save the historical remnants of the Val di Noto UNESCO World Heritage site. Located in the ancient Sicilian city of Ragusa, the fragments of Santa Maria del Gesu’ convent and church will be reinvented as a regional archaeological museum, enabling a precious collection of ancient artifacts to be presented to the public for the first time. The project is due for completion in 2013. Originally constructed in 1639 using recycled building materials from the disused Castle of Ragusa, the religious structure was badly damaged in an earthquake in 1693. Reconstructed in 1700, the building was then used as a school and hospital but time and wear slowly led the structure to ruin by the late 19th century.

- IRAK - The Antiquities Department has dispatched five excavation teams to the southern marshes, where several ancient sites are threatened with inundation, the department’s spokesman said. The sites are reputed for their Parthian and Sasanian (Persian) finds, he said. The sites are also known for their archaeological riches as a few of them were already partially dug in the past. They are Tel Akar in Missan, Tel Abushaib in Basra, and Tel althabab, Tel Aburabab and Thamer palace in Dhiqar.

- AUSTRALIE – Albany - When a 19 year-old construction worker plucked the first golden coin from the rubble at an Albany construction site, he could not have predicted the excitement it would cause. But as workers dug coin after coin from the ground, finally counting more than 300, they probably realised they were onto something big. The coins, found just inches under slabs of tarmac at the site of the old Freemasons Hotel, were solid gold sovereigns, dated between 1817 and 1900. Andrew Eyden from the Albany Historical Society says : "There was a time in the 1880's when the townspeople were scared by the very real threat of an attack by the Russians on Australian Ports," "The British were very close to declaring war on Russia and Russian ships had been sent on a reconnaissance mission to take depth soundings and photographs of Albany's port. "The banks in Albany were so concerned about the threat, they packed up 3,000 of the town's sovereigns and sent them to Perth for safekeeping." Mr Eyden thinks it is completely plausible that some of the money was lost along the way. "It's entirely possible because the banks involved were located very close to that site." One researcher believes the coins might have been the ones stolen from notorious South Coast whaler and sealer John Williams in 1842. John Robertson, who has studied the history of sealing and whaling on the South Coast for the past 12 years, says two men were sentenced to seven years transportation for stealing 250 gold sovereigns and a large amount of silver from Williams. "But the money was never recovered, so there's every chance the money found in the car park belonged to Williams," he said.  "The two thieves were sent to Tasmania and we don't know what became of them after that. "They could have buried their money and never come back for it."

- ROYAUME-UNI – Maryport - Excited volunteers are gearing up for a major Roman dig at Maryport to shed more light on an age-old mystery. Next month, 28 volunteers from all over West Cumbria will help excavate an area near to the town’s Senhouse Roman Museum, where a unique cache of 17 Roman altars was discovered in 1870. It is thought the altars were buried in pits but no one knows when, why or by whom. Jane Laskey, Senhouse Roman Museum curator, said: “There is this huge mystery around these altar stones. Were they buried? Was there something else going on? Why were they buried? We need to untangle all that information. The excavations will continue for six weeks and will be led by Ian Haynes, of Newcastle University, and archaeology expert Tony Wilmott. The altar site was pinpointed through a geophysical survey carried out by TimeScape Archaeological Surveys and Southampton University.

- INDE – Guwahati - "Earth was being brought to Dhirenpara from Fancy Bazar to fill holes in the ground at some spots for the last few days. There were several stones caked in mud lying among the heaps of earth. No one noticed them, but when I saw the stones had carvings on them, I put them together and, to my surprise, I could discern the image of Lord Vishnu," said Ali, a small businessman. Though he's an undergraduate, Mintu showed great alertness and acted with responsibility by immediately informing the officials. "I was sure the stones were from very ancient times, so I decided to inform the archeology department to take charge of them," said the youth, who, along with friends  helped the department collect the stones. Initially, nine such stones were recovered and later three more were found. "This indicates there were stone temples in the area during the 10{+t}{+h} century. We found statues of Lord Vishnu, carvings of other images and the top part of a door, probably of the temple," said director of Assam Archaeology department H N Dutta, adding that they have taken necessary measures for preservation of the relics. Deputy director Ranjana Sarma said, "I'm really impressed by the youth's presence of mind and alertness in noticing the relics and informing us about them."

- ROYAUME-UNI – Philiphaugh - Metal-detecting volunteers were finishing their work on the Philiphaugh battle site near Selkirk last weekend. Experts from Glasgow University’s Centre for Battlefield Archaeology – the only one in the world – return next month to carry out a geophysics survey. Finds directly to do with the 17th century battle itself have been small and include musket balls, a stirrup and part of a cannister shot, though caches already recovered include more musket balls and metal buckles. Archaeologist Natasha Ferguson, who is in charge of the work, said  “We uncovered one musket ball and a piece of what appears to be cannister shot. The musket ball was very unusual as it seems to have an iron object set within it and a hole running through the centre. “The cannister shot – musket balls placed in a can and fired from a cannon – have a very distinctive signature with facets all over the surface caused when the balls bounce off each other when fired. We also found a small coin which may be French and possibly dating to the mid-17th century.” On Saturday, the last metal-detecting day, the team of volunteers found a handful of late 17-18th century coins, a pistol ball, a piece of buckshot or hailshot, buttons, a couple of buckles, a small blade and an ornate copper alloy walking cane end. The September 1645 battle was a pivotal moment, says Selkirk historian Walter Elliot. He explained: “It represents the decisive defeat of Montrose and his hitherto seemingly unbeatable Royalist forces by a Covenanting army commanded by Leslie. This was the end of Royalist hopes in Scotland and eventually led to a Commonwealth of England, Scotland and Ireland under Cromwell.”

Runcorn - A bronze lion head dating from the 15th century has been found in Cheshire. The artefact, believed to have been a hat badge, is among 80 items discovered by archaeologists at a building site near Runcorn.  Pottery dating back to the 13th century and footings of timber-framed houses have also been discovered at a site near Lodge Farm. Archaeologists believe the items would have been owned by people living in the medieval village of Norton. They have found evidence of buildings in the form of post holes, where vertical timbers were set into the ground, and also shreds of medieval pottery. 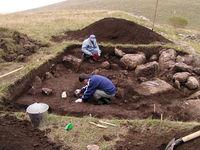 Gulistan - The Archaeology and Ethnography Institute will begin archaeological excavations in the Gulistan fortress in the Shamakhi region since June. Shamakhi is the cradle of ancient science and culture of Azerbaijan. The Gulistan fortress belongs to the architectural monument of the 8th-9th centuries. This legendary castle was one of the residences of the Shirvanshakhs and occupied an important place in the history of the Azerbaijani statehood. The fortress was rebuilt in the 12th-13th centuries. Arabs, Seljuks, Mongols and Ottomans had attacked the fortress. It was a shelter of residents of Shamakhi, where they hid during campaigns of the Khazars, Arabs, Seljuks, Georgians, Mongols, Safavid and Ottoman empires.