Milton Keynes - A set of bones discovered on a building site in Milton Keynes could be Roman, said a council archaeologist. The remains of more than one person have now been discovered at the Taylor Wimpey development in Oakridge Park. The bones of one skeleton were first unearthed by workers on the site two weeks ago. Shortly after the bones were first unearthed, the council's senior archaeological officer Nick Crank said that the only certainty was that the skeleton was older than about 70 years. He has now revealed that they could date back to the 5th Century, because the discovery bears some resemblance to excavations made in the mid-1980s in Wolverton. "You can see there are some large stones which may be placed around the outline of this [discovery] forming what we refer to as a 'kist' burial," he said. "The only 'kist' burials I'm aware of from the immediate vicinity were excavated as part of the Bancroft Roman Villa and Mausoleum site and they dated to the very late Romano-British period [43-410 AD]. "So they are potentially late Roman, but I'm just going off superficial similarities of other sites." 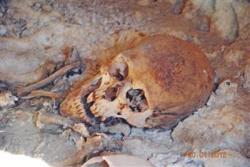 Adana - A farmer from the southeastern province of Adana’s Gökbuket village, Ahlat Gezer has unearthed a historic graveyard while plowing. Gezer’s tractor was suddenly stopped by an obstruction while he was plowing the field, which he rented from the Regional Directorate of Forestry. Under a concrete block in the field, he discovered a hole containing human skeletons. The gendarmerie officials have determined a three-chamber graveyard. Seven human skeletons have been found in the graveyard which dates back to the Roman and Byzantine period. The skeletons have been put under the care of the Adana Archaeology Museum and works have started to excavate the graveyard. 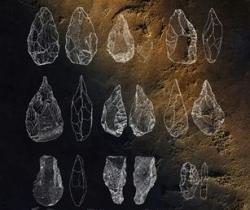 - Imjin Basin - Many things remain a mystery about the early Paleolithic period, especially the one of East Asia. Many of the Paleolithic remains found in the region have added to such questions. Most importantly, hand axes, which had been considered some of the most significant remains of the early Paleolithic in Europe and Africa, were not found in Asia until the late 1970s.  Yet as the first set of Acheulian-like hand axes were found in Korea’s Imjin River basin in Gyeonggi Province in the 1970s, the international archeology scene saw a new turn for the early Paleolithic Asia studies. Since then, similar hand-axe remains have been discovered in China and other Asian countries. (Discovery of the hand axes in the Imjin River basin in central Seoul) makes it clear that mere presence or absence of certain stone tools cannot provide meaningful ground for understanding the real patterning of Paleolithic records,” wrote editor Yi. “These pieces nevertheless do not appear to be identical to similar artifacts found in more westerly locale.” Other featured articles also deal with the findings in of Asia Paleolithic research, especially the hand axes discovered in the region. Notably, scholar Michael Petraglia presents new Acheulian discoveries in India in his article “Assessment and Critique of Chronometric Ages Associated with ‘Early’ Acheuliann Assemblages in the Indian Subcontinent,” and claims there is a significant difference between Acheulean and East Asian assemblages. Another scholar Truman Simanjuntak, on the other hand, examines the hand axes discovered in Indonesia, and their complex link to the culture of the particular time period. 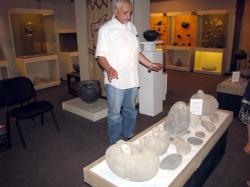 Yerevan -  The Cambridge Yerevan Sister City Association (CYSCA) at a recent meeting of its Board of Directors voted unanimously to adopt a program to help preserve and renovate the Shengavit Historical and Archaeological Culture Preserve in Yerevan. The Shengavit Preserve includes an archaeological site dating to the 4th millennium BC which was continually occupied from between 1,000 to 2,000 years. Archaeologists differ on the duration of occupancy. There is a small museum next to the archaeological excavation containing some of the artifacts recovered from the site. Other Shengavit artifacts are on display at other museums within Armenia. The Shengavit settlement was part of the so called Kura-Arax culture which had trade relations with cultures far beyond Armenia's borders. This culture is believed to have played an important role in the formation of the Armenian people. Shengavit was initially excavated in 1936 by Joseph Orbeli (1887-1961) and Eugeni Bayburtyan (1898-1938). Orbeli was the director of the Hermitage Museum in St. Petersburg, Russia. Bayburtyan, an Armenian archaeologist, was arrested by the Soviet secret police in 1938 for being too nationalistic. Most recently, in 2011, a team of Armenians and archaeologists from the U.S. led by Dr. Mitchell Rothman, Professor of Anthropology and Archaeology at Widener University in Pennsylvania, examined the site. Following is a portion of a recent comment by Dr. Rothman: "The site of Shengavit in the hills above the Ararat Plain is one set of remains of an ancient culture called variously Kura Araxes, Early Transcaucasian, Karaz, Pulur, Shengavitian, etc. Its full time period is still much under debate, but probably it starts somewhere around 3500 BC and ends 2500-2200 BC. The homeland of this culture is in the Southern Caucasus, the current countries of Georgia, Armenia, and Azerbaijan, along with a section of current northeastern Turkey from Erzurum through Kars provinces. To fully understand the importance of this culture, its place in its contemporary world is essential to comprehend. Its beginning is co-terminus with the establishment of the first states in southern Mesopotamia and the founding of the first international trading system, which covered an area from the Persian Gulf to the North Caucasus from modern western Iran to the Mediterranean Sea..." 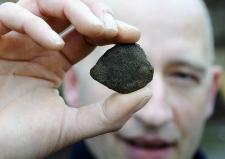 Dereham - A small piece of pottery discovered during an archaeological dig has provided a glimpse into Dereham’s medieval past. The excavation, or trial by trenching, of the former library site in Church Street is being headed by Chris Birks Archaeological Services. The excavation, which started two weeks ago, is due to finish next week and on January 12 a small piece of pottery was found which is believed to date back to the 14th century. Mr Birks said: “It is a great opportunity to try to understand what happened in the middle of Dereham in the past. It is confirming the settlement activities from the medieval period. “Although it is only one piece of pottery, it is about getting an understanding of what people’s lives were like at the time. “As a find it is not rare, but it is important to find out that settlement took place. This is a significant opportunity to understand the history of this part of the town.” The pottery, which was found in one of four trenches, has remnants of soot on it and is believed to have been part of a cooking pot. Other items found in the four trenches included general domestic waste. Mr Birks said that settlement during the medieval period spread from church buildings and the former library site is on a historical street between St Nicholas’ Church and the Market Place. Much of the archaeology of the town was thought to have been lost in a series of fires between 1581 and 1659. Only two of the town’s original buildings survived, the church and Bishop Bonner’s 16th century cottage. Another discovery from the four trenches was a waste pit at the back of the site which would have served houses. A set of steps, possibly leading to a cellar, was also found which indicated the homes were built in the 19th century, according to Mr Birks. The church has Norman origins and, it has been claimed, lies on the site of an earlier Middle Saxon nunnery. Dereham is thought to have emerged from a settlement pre-dating the Saxon era and named after a deer park that existed in the area.