- SYRIE - Tell Lilan - Archaeological discoveries in the Tell Lilan site located 120 km northeast of Hasaka indicate to the historic significance of the site which dates back to the beginning of the 2nd millennium BC. The site is located on one of the important ancient trade routes linking Cappadocia, Ashur and Anatolia principalities. Excavations that have been carried out in various sectors in the site since 1978 show that the area was settled for the first time during the middle of the 6th millennium BC and continued until the late 1800's BC. Expeditions uncovered pottery dating back to the Halaf period (6500–5500 BC) and the Ubaid period (6500-3800 BC), in addition to bell-shaped jars dating back to the Uruk period (4000-3100 BC). Excavations uncovered an important human settlement dating back to the era of Nineveh. Pottery, serrated yellow cups, pedestals of colored statues, and cookware were discovered at the settlement. The site covered 15 hectares during the first half of the 3rd millennium BC, and later witnessed a sudden boom in terms of population and civilized development during the middle of the 3rd millennium BC. During this era, a wall and a defensive system were established to protect the expanding housing areas, transforming the site from a tiny village to a city covering 90 hectares. A temple was uncovered in the northeast side of the site. Its most distinct characteristics are its facades, twisting and ornate pillars, and a central hall surrounded by chambers on the eastern and western sides. Pottery, tablets and cylindrical seals bearing cuneiforms were found in the temple. The castle found in the lower area of the site contained an archive of 650 cuneiform tablets written in the old Babylonian dialect, with the texts including administrative and economic texts, political messages and treaties that shed light on developments in the area following the fall of the city of Mari (circa 1759 BC). According to texts found in Tel Lilan and other sites, the city was given the name Shubat Enlil which means "Home of Enlil" (Enlil being an ancient god) by Assyrian king Shamshi-Adad I. Before that, it was known as Shekhna, and this name was used again after the death of Shamshi-Adad I in 1776 BC. The city was destroyed by king Samsu-iluna of Babylon in 1728, and remained unoccupied since then.

- USA - Newburyport - For years it has been buried, swallowed up by layers of earth, muck, and water, a once-prominent landmark concealed by time. And the late-1700s wharf might have remained that way — embedded for the ages — had it not been for a recent accidental find.Last June, as workers excavated portions of Newburyport’s Water Street for the city’s new waste-water operations building, they unearthed large, centuries-old slabs of granite. Based on maps and archaeological research, the giant rectangles of rock were identified as the capping stones of a 19th-century wharf built onto an earlier Revolutionary War wharf owned by Captain William Coombs. And, as the city’s infrastructure project has continued for the past several months, archeologists have periodically been on-site to document additional finds from the 1700s and 1800s, including more capstones, cribbing supports, and, this month, timbers from an adjacent wharf. In late November, UMass archeologist Timothy Barker determined that the granite caps initially quarried from the site in June likely date to the 19th century. Then, in an excavated trench amid contaminated water, he also identified hand-hewn timbers that probably constituted the crib of the initial wharf likely built by Coombs’s father, Philip Coombs, between 1734 and 1756, according to Harris. In December, more granite capping stones were uncovered, and, earlier this month, timbers from an adjacent wharf were revealed — all of this as local history boosters and buffs stood by.

- ROYAUME-UNI –   Hallaton -  Archaeologists have pieced together the remains of a 2,000-year-old guard dog whose spirit is believed to have protected a hoard of treasure. The skeleton, which is about the same size as that of a retriever or Alsatian, was discovered in a pit at the site of an Iron Age shrine in Hallaton, near Market Harborough. Experts think the animal was sacrificed and buried to protect the Hallaton Treasure – a collection of more than 5,000 gold and silver coins. The hoard was discovered a decade ago and is now housed in a gallery at Harborough Museum. Vicki Score, the university's project manager, said: "The Hallaton site is surrounded by a boundary ditch."The skeleton of the dog was discovered at the entrance to the site, buried in a slot in the ground. "We believe it was bound and sacrificed and buried to guard the coin offerings. It was in an awkward position, looking at the hoard." Mrs Score said the archaeologists had pieced together most of the skeleton, which dates back to between AD1 and AD50. "Unfortunately, the back legs are missing," she said. "They could have been ploughed away."She said the skeleton was buried on top of the remains of another dog and there was evidence of a third.Mrs Score added: "It may be it was felt the previous guard dog had lost its power to protect. "It would have been considered an honour for the dog, which was probably quite old, to be sacrificed in this way." The dog bones will be housed in a case in the entranceway to the Hallaton Treasure Gallery, imitating the location of the dog burial at the shrine. 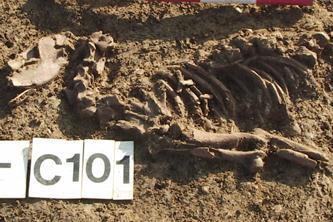 Uyun-al-Hammam - Researchers analysing remains at a prehistoric burial ground in Jordan have uncovered a grave in which a fox was buried with a human, before part of it was then transferred to an adjacent grave. The University of Cambridge-led team believes that the unprecedented case points to some sort of emotional attachment between human and fox. Their paper suggests that the fox may have been kept as a pet and was being buried to accompany its master, or mistress, to the afterlife. If so, it marks the first known burial of its kind and suggests that long before we began to hunt foxes using dogs, our ancestors were keeping them as pets - and doing so earlier than their canine relatives. The cemetery, at Uyun-al-Hammam, in northern Jordan, is about 16,500 years old, which makes the grave 4,000 years older than the earliest known human-dog burial and 7,000 years earlier than anything similar here involving a fox. Writing in the open-access journal, PLoS One, the researchers also suggest that this early example of human-animal burial may be part of a bigger picture of growing cultural sophistication that has typically been associated with the farming societies of the Neolithic era, thousands of years later. Sadly for fox-lovers, however, the relationship between man and that particular beast was probably short-lived. The paper also says it is unlikely that foxes were ever domesticated in full and that, despite their early head start, their recruitment as a friendly household pet fell by the wayside in later millennia as their human masters took to the more companionable dog instead.The burial site provides intriguing evidence of a relationship between humans and foxes which predates any comparable example of animal domestication.