Kenilworth - A rare Bronze Age burial urn, discovered by archaeologists in 2014, is set to go on display in Warwickshire for the first time. The urn was discovered by archaeologist Bryn Gethin during the digging of a foundation trench for a new house in Kenilworth in March. Experts say it dates back to the Early Bronze Age, between 2500BC and 1800BC, and contained the "earliest human inhabitant" found in the area. It will be displayed in Kenilworth.

Wadi el-Natrun - Marking just the latest of a long dispute which arose around a road project threatening to demolish an archaeological site, Coptic monks are literally willing to put their lives on the line. According to Fides, the project to build a road that should unite the city of Fayoum to an oasis area crossing the territories around the Coptic monastery of St. Macarius, threatens an archaeological area that stretches around a church dating to the fourth century. Ninety-two kilometers from Cairo, the Monastery of St. Macarius is located in Wadi el-Natrun, the ancient Scetes. In Christian literature, the Scetes refers to one of the three early Christian monastic centers located in the desert of the northwestern Nile Delta. In addition to the monastery itself, the project also threatens its water supply of the monastery and some cultivated areas belonging to it. The monks, in recent days, launched an initiative of non-violent resistance. They lied in the path of bulldozers working on the project, led by workers who approached the monastery lands shouting "Allah Akbar." In the past, the monks submitted various alternative projects to the authorities that would allow the site's historical and natural heritage to be preserved. To encourage the search for alternative solutions, the Coptic Church also established an ad hoc committee for this purpose. In addition, the Ministry of Antiquities expressed its opposition to the project, recommending the archaeological be fully protected. The monastery was founded in 360 A.D. by St. Macarius the Egyptian, a spiritual father to more than 4,000 monks of different nationalities, such as Egyptians, Greeks, Ethiopians, Armenians, Nubians, Asians, Palestinians, Italians, Gauls and Span-lards. Among the monks are men of letters and philosophers, and members of the aristocracy of the time, along with simple illiterate peasants. Since the fourth century, the monastery has been continuously inhabited by monks. 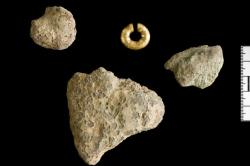 Cwm Cadnant - A hoard of ancient treasure dating back 3,000 years has been uncovered in North Wales. Four gold and copper artefacts, from the Late Bronze Age of 1000-800 BC, were declared treasure by the HM Coroner at a hearing on Wednesday. The hoard, including a gold penannular ring and three fragments of copper ingot, were discovered in Cwm Cadnant by Philip Cooper in 2013. The artefacts were discovered a few metres apart from each other while Mr Cooper was metal detecting on farm land. The artefacts, once buried all together, had probably become separated through more recent farming activity.