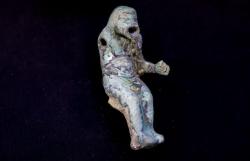 Caesarea - This past week, archeologists discovered the remains of two sunken ships filled with a trove of Roman treasures off the Mediterranean coast . The ships’ cargoes and their remains were found during an underwater survey conducted by the Marine Archeology Unit of the Israeli Antiquities Authority. Over the past two months, hundreds of Roman silver and bronze coins were discovered, dating back to the third century. More than 500 silver coins from the Middle Ages have also been found scattered around.The ships and coins were discovered in shallow water, at a depth of about four meters. The finds were made near the ancient city of Caesarea, and can be dated to the Roman and Mamluk periods- around 1,700 and 600 years ago, respectively. A number of ancient items were also discovered along with the coins. A bronze eagle symbolizing Roman rule was found in the sediment, along with a figurine of a Roman pantomimus in a comic mask, pottery vessels, and a number of bronze bells that were thought to help ward off evil spirits. Metal items from the hull of a wooden ship were also uncovered. These finds include numerous large bronze nails, lead pipes from a bilge pump, and a large iron anchor that’s been broken into many pieces. The ships were probably anchored nearby and were wrecked by a storm. They may have been anchored offshore after getting into difficulty, or fearing stormy weather, because sailors know well that mooring in shallow, open water outside of a port is dangerous and prone to disaster.” The fact that the large anchor is broken attests to the forces it withstood until it inevitably snapped in this storm. the Roman ship originally came from Italy, based on the artifacts. However, it is unclear whether any sort of remnants of the original wooden ship could still be intact beneath the sand. One of the most surprising treasures found beneath the surface is a Roman gold ring with a green gemstone carved with a figure of a shepherd carrying a sheep on his shoulders. Robert Cole, the head of the authority’s coin department, called this ring “exceptional.” He went on to explain that “on the gemstone is engraved an image of the ‘Good Shepherd,’ which is really one of the earliest symbols of Christianity.

Goyazan - New archeological finds have been discovered as part of exploratory excavations conducted in the Goyazan branch of the Avey State Historical and Cultural Reserve. One of the study subjects at Mount Goyazan was the seven-tower, 400 meters tall Goyazan Fortress, built of non-rectangular rock. The excavations were also carried at the foot of the northwestern side of Mount Goyazan, where imported rafts and rock fragments were found. The conducted research discovered that the towers of the fortress have a diameter of 6 meters, and the existing parts are 4 meters high. The length of the wall, including the five towers from southeast to northwest, is 111 meters, and the length of the back of the fortress is 99 meters. To determine the construction date of the fortress, a ditch was set at the foot of the entrance of the northern tower. During the excavations, it was found that the perimeter of the towers of the fortress was also filled with unpolished pieces of rock used in its construction. This method was used in the Middle Ages to strengthen towers and walls. More than 200 local glazed and unglazed ceramic fragments of the Middle Ages were found among the excavated rock fragments. The research also revealed that the fortress was constructed in the region's Islamic style. Radiocarbon samples were taken from fragments found during the excavations to get a deeper understanding of the history of the fortress's construction.A completely different architectural style can be witnessed at a height of 200 meters. According to initial judgment, these walls, made of polished stones in the shape of a cube, were probably sacred places of worship and shelters of the ancient or early Christian period. The natural erosion of the paths leading to these buildings makes it difficult to research them. During the archaeological excavations, 12 graves were discovered. Nine skeletons had their hands placed crosswise on the chest in the directions of the shoulders, there are no signs of the coffin, and the orientation from northwest to southwest directly repeats the medieval burial tradition of Caucasian Albania. One of the other skeletons was buried over his left shoulder according to a Christian custom. The right hand of the other skeleton is directed towards the shoulder, and the left hand is directed parallel to it but towards the right pelvis. The discovery of a stone box tomb indicates the centuries-long existence of a large Christian necropolis of Caucasian Albanians in the area. A well-polished stone box was buried in the tomb in a manner typical of early medieval Albanian Christianity. A small number of earrings, rings and buttons made of bronze, copper and iron were found in the burials. The excavations revealed another essential monument to Caucasian Albania.

Valletta - An underground reservoir dating back to the time when Malta was ruled by the Knights of St John has been discovered beneath the St Andrews’s Ditch car park. Little information is available about its size, however, according to a post on the Belt Valletta Facebook page, the reservoir is in a bad condition and could collapse at any moment. Broken slabs and missing arches, it would appear, have rendered the entire structure unstable, likely exacerbated by the large volumes of water that hit Malta at the start of the month. Just last month another Knights-era discovery was made in Valletta when a painting from the time was discovered behind a bricked-up arch at the Museum of Archaeology. The painting was discovered during a restoration project and was described by Heritage Malta as a unique surviving element that could reveal a lot about the decorative scheme of the hall prior to the 19th-century.

Deir el-Bahari - Archaeologists have found a pile of garbage at the tombs in the Hathor cult complex 3,500 years ago, a complex of three temples in the Hatshepsut temple in Deir el-Bahari (also known as Deir el-Bahri) near Luxor. I found it unexpectedly. Although the dump was hidden in the tombs of the early Middle Kingdom, many of the artifacts in the dump are from the New Kingdom, including the 18, 19, and 20 dynasties that ruled from the 16th century BC to the 11th century BC. .. Many of these crafts are votive offerings and people Ancient Egypt Given to Hathor, the goddess of childbirth. The deposit of donations to Hathor found at this tomb indicates that this part of the Temple of Hathor was not used for worship and was treated as a place to dump garbage.

Kurtulus - Historical artifacts were discovered in eight tombs dating back to the fourth century. The tombs were uncovered during roadway expansion efforts in the Kurtulus district of Ordu, a province on Turkey's Black Sea coast. Officials added that many human and animal remains, including skeletons, were found in the tombs, along with pieces of jewelry made of gold, sardine stone, silver, glass, and bronze. Pieces of a glass bottle and beads were also found in one of the tombs, they said.

Novgorod - Archaeologists have found a complete birch bark letter in the historic centre of Veliky Novgorod. Although their existence was mentioned in some old East Slavic manuscripts, the discovery of birch bark letters has significantly changed the understanding of the cultural level and language spoken by the East Slavs. The researchers were excavating the remains of a wealthy estate dating from between the 12th to 15th century AD, containing household items such as fragments of leather shoes, ceramic vessels, wooden dishes, as well as sinkers and floats for fishing nets. The most notable finds include a 13th century seal depicting St John the Theologian and St Lazarus of Bethany, in addition to four lead seals from the 12th century. Whilst excavating the cultural layer from the 12th century, a whole birch bark letter marked 1144 was uncovered in which the author sends a question to a certain Dobroshu about the amount to be paid for the provision of services and requests a response to his letter. The letter was preserved in the Novgorod cultural layer (up to eight meters, or 25 feet deep) thanks to the heavy waterlogged clay soil which prevents the access of oxygen.;Near to the estate site, the team also excavated several large warehouses that stood along the banks of the Volkhov river, where they recovered fragments of boats and iron staples for the repair of river vessels, ceramic pots for tar, fragments of leather shoes and a lead seal of the Novgorod tiun of Peter, who lived in the 14th century.