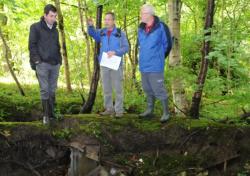 Edinburgh - A campaign to save the Capital’s First World War trenches has taken a major leap forward - with funding being secured that will allow experts to carry out a vital survey of the historical site. The University of Glasgow’s Centre of Battlefield Archaeology and private firm GUARD Archaeology will carry out the work early next year. The announcement follows a campaign led by writer and historian Lynne Gladstone-Millar, whose father, William Ewart Gladstone-Millar, was trained in the trenches before he was sent to the Battle of the Somme. The 16th Battalion The Royal Scots dug the trenches in Colinton and Dreghorn - which was open countryside at the time - before they made their way to France. The area of Dreghorn Woods where the trenches lie is open to the public and is owned by the MoD. Representatives from Historic Scotland, the MoD and the council have been in talks to discuss how the trenches can be best preserved. 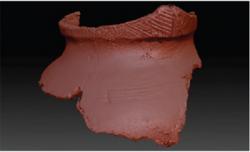 Pseira Island - Excavations at the Bronze Age seaport on Pseira Island uncovered the remains of sophisticated water retention systems that included the addition of retaining walls to prevent erosion, massive dams with associated reservoirs, and small check-dams to ravines that reached over one hundred meters in length in order to control water runoff and make it available for human use. Agriculture was one of the cornerstones of the Bronze Age Cretan economy, and it is no surprise that the ancient inhabitants of the island went to great lengths to control water runoff and make it available for human use. Despite the application of traditional archaeological survey methods, the full extent of the water management systems was not understood fully as the islandâs rugged topography prevented intensive and thorough survey of many places. The use of a differential Global Positioning System (dGPS) unit provided the opportunity to take a fresh look at the evidence for water management on the island. The results of this study contribute substantial amounts of new information on the little known subject of Minoan water conservation and control.

Fermanagh - Environment Minister Alex Attwood has extended the period in which archaeologists can excavate a crannog in County Fermanagh. Discoveries made at the crannog, an artificial island in a lake, shed new light on life in medieval Ireland, the Department of the Environment has said. Excavation was to finish on 30 December but will go on for three more months. The new A32 Cherrymount link road near Enniskillen is due to be eventually built on top of the crannog. "The excavation is a once in a century opportunity," said Mr Attwood. "It will reshape national and international thinking on crannogs and the lives of people stretching back 1,300 years at least. "What has been found will ultimately lead to a reassessment of life in Ulster in early Christian and medieval times. It is of international importance. The excavation has revealed artefacts that show a snapshot of life in Ireland at least as far back as the 9th century AD. Among the finds are a wooden bowl that has a cross carved into its base, parts of wooden vessels with interlace decoration, exquisite combs, a large pottery collection, chess-like pieces for games, and timber foundations for dozens of houses.

Las Labradas - Mexican researchers have discovered an archaeological site in the state of Sinaloa estimated to be around 4,000 years old, reported the National Institute of Anthropology and History. Sixty projectiles points, 20 complete and 40 fragments, were found in the area built around two thousand years B.C. The site is located in the area know as Las Labradas, where evidence of the oldest human presence in that state was found. The find is greatly significant for Mexican archeology due to it changing the timing on the antiquity of human occupation in the country's northwest, said archaeologist Joel Santos. Santos said that in addition to projectile points there other stone objects, such as knives and tool fragments were also found. The remains appear to be part of a rudimentary technology that was recorded in early sites in the southwestern United States and Mesoamerica, between the existing Mexican territories of Puebla, Sonora, Durango and Coahuila. From to the distribution of the discovered articles, archaeologists infer the existence of temporary camps and possibly a lithic manufacturing workshop.