Baiae - Rome’s nobility were first attracted in the 2nd century BC to the hot springs at Baiae, which sits on the coast within the Campi Flegrei – a supervolcano known in English as the Phlegraean Fields. Seven emperors, including Augustus and Nero, had villas here, as did Julius Caesar and Mark Antony. The poet Sextus Propertius described the town as a place of vice, which was “foe to virtuous creatures”. But by the 4th century, the porticos, marble columns, shrines and ornamental fish ponds had begun to sink due to bradyseism, the gradual rise and fall of land due to hydrothermal and seismic activity. The whole area, including the neighbouring commercial capital of Pozzuoli and military seat at Miseno, were submerged. Their ruins now lie between four and six metres (15 to 20 feet) underwater. A careful sweep of sand near a low wall uncovers a stunning mosaic floor from a villa that belonged to Gaius Calpurnius Pisoni, known to have spent his days here conspiring against Emperor Nero. Explorers follow the ancient stones of the coastal road past ruins of spas and shops, the sunlight on a clear day piercing the waves to light up statues. These are replicas; the originals are now in a museum. The big ruins were easily discovered by moving a bit of sand, but there are areas where the banks of sand could be metres deep. There are undoubtedly still ancient relics to be found.

Gotland - A skeleton, sword, and spurs that belonged to an Iron Age warrior have been found during an archaeological excavation on the Swedish Island of Gotland in the Baltic Sea. Researchers believe the man may have served in the Roman army. "I was present when the femur and a piece of the hip bone were excavated. You have to be very careful when digging this type of material so we had to carefully remove the soil with brushes. Eventually we found spurs down at the feet. And when we brushed at the belly of this individual, it appeared as a piece of bronze that we carefully continued to brush forward", student Gustav Randér told the newspaper Dagens Nyheter, describing the situation as "absolutely fantastic". The object appeared to be an 80-centimetre sword with bronze fittings. In addition, part of the sheath was also preserved on both the top and bottom of the bronze sword. At the bottom of the sword, an acorn-shaped decoration was found. The details about the owner of the sword, however, remain scarce. He appears to be a man with a strong jaw and solid bone structure, who lived sometime during the 300s-500s. Further investigations and research will be carried out in the future. Ala-Tey - Archeologists in Siberia were surprised with 'one of the most interesting' finds at an ancient burial site when they uncovered a 2,137-year-old item. While exploring the 'Russian Atlantis', the team found a tomb belonging to an ancient fashionista nicknamed 'Natasha' - who is believed to have lived during the Xiongnu period in ancient Mongolia during the 3rd century BC. They unearthed a large rectangular item encrusted with a dazzling array of precious stones and jewels. Among the stones encased in the inlay are turquoise, carnelian and mother-of-pearl. It is believed that the ancient woman used to wear the piece as a belt buckle. In size, it is large seven by three and a half inches. The find is from the Ala-Tey Necropolis in the so-called Sayan Sea, a giant reservoir in the mountainous Russian Republic of Tuva. The treasure was discovered in the normally submerged 'Atlantis Necropolis', which temporarily drains for a few months each year during the summer, and is usually submerged under 56ft of water.

Onega - Archaeologists from the Petrozavodsk State University has discovered a “unique” burial whilst exploring ancient settlements on the western shore of Lake Onega, in the territory of the Republic of Karelia. The researchers unearthed the burial of a high-status individual in a narrow oval pit lined with red ochre. When clearing the grave, they discovered 140 pieces of amber jewellery (examples of which have previously only been found in the Eastern Baltic), consisting of buttons, pendants, and various flint items. The amber buttons were arranged face down in rows, and were sewn into a leather cover placed over the deceased, whilst along the edges of the pit were deposited amber decorations that formed two tiers. By comparing the analogy with amber decorations from sites located in the Eastern Baltic, archaeologists have proposed that the burial dates from around 3400 BC during the Chalcolithic or Copper Age (a transition between the Neolithic and the Bronze Age). During this period, the mining of metal and stone was particularly developed in some areas, along with the processing of those materials into valuable goods. The researchers theorise that the deceased may have been a trader from the Eastern Baltic States, who arrived on the western shore of Lake Onega to acquire axes in exchange for amber. This could suggest ancient trading links between the people living in Karelia, with the tribes that lived on the southern coast of the Baltic Sea.

Michigan -  A Clovis camp site has been discovered on farmland in southwest Michigan. It had been previously thought that the presence of glaciers in the region some 13,000 years ago made it uninhabitable beyond an occasional hunting trip in the ice-front environment. Independent researcher Thomas Talbot explored the farmer’s fields each spring after they had been plowed for more than ten years, and recovered nine pieces of Clovis points over that time. He contacted archaeologists Henry Wright and Brandon Nash of the University of Michigan, who investigated the area where Talbot found the points. Digging down some five feet, Nash and his colleagues uncovered two artifacts in an undisturbed layer below the plow zone. In all, the team has recovered more than 20 Clovis tools and hundreds of pieces of stone debris left behind by tool production. Nash thinks the camp may have been used for a short period by a small group of people who split from their main group for a season. Residue analysis could reveal what animals they hunted and what plants they processed, he added. 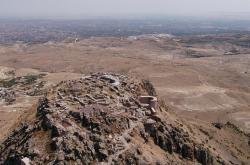 Konya - The ancient gate of a castle used by several civilizations over thousands of years was unearthed in central Turkey's Konya, lead archaeologists say, estimating the structure is around 800 years old. Excavators found one of the gates of Gevale Castle, located on Mount Takkeli in the central province of Konya, inside the area of ​​the bulwarks. “According to the available evidence, we have stated that the building dates back to the Hittites, one of the most ancient Anatolian civilizations," Çaycı told Anadolu Agency. “The bulwarks and castle ruins can be said to contain signs of the Roman and Hellenistic eras,” he added. Çaycı noted that the gate most probably dates back to the Seljuk era, referring to a Turkish state before the Ottomans. “There must have been another door here before. We got samples in pieces,” he added. “We’re trying to complete them.”

POLOGNE - Biskupiec - During archaeological excavation in the vicinity of Biskupiec, Northern Poland, 13 denarii minted by the rulers of the Carolingian Dynasty in the 9th century, were discovered. A few months earlier, a treasure of over a hundred Carolingian coins was discovered at the same site. This time it was the 12 denarii of Emperor Louis the Pious (814-840) and the denarius of King Charles the Bald (840-877). Earlier, 118 silver coins and their fragments were discovered there. Currently, the collection has a total of 131 items. According to archaeologists, the findings are unique because it is the first Carolingian denarii treasure discovered in Poland. Until now, archaeologists have found only single coins from this period in Eastern Europe as these were minted in Western European mints.

Pergamon - An excavation has found Kybele terracotta figurines dating back to two millennia in and around the Bergama site, suggesting the cult of the Anatolian mother goddess was going strong during ancient times. Eight new sacred sites and many figurines were found in and around the Bergama (Pergamon). These terracotta figurines represent the goddess of fertility Kybele, going back 2,200 years. During the excavations in Bergama, there were five religious areas found within city walls and three outside city walls. In these areas a multitude of fertility goddesses, or mother goddesses, Kybele figurines were found. The Kybele cult was people wishing for fertility of their lands, for their animals to not die, for their children to be healthy, for births to be easy and healthy.