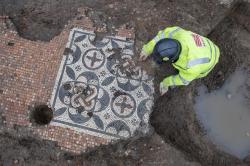 Londres - Archeologists have unearthed the largest area of Roman mosaic to be discovered in London in 50 years — just a three-minute walk from The Shard. The mosaic is made up of two panels handcrafted from small coloured tiles, set within a red tessellated floor. The larger panel features colourful lotus flowers and a pattern known as 'Solomon’s knot', made of two interlaced loops — which are surrounded by bands of intertwining strands, known as a 'guilloche'. It's been attributed to a team of mosaicists, 'the Acanthus group'. The smaller panel is simpler in style, but features more Solomon's knots, two stylised flowers and geometric motifs in red, white and black. A very similar mosaic was unearthed in Trier, Germany — and it's highly likely they were made by the same craftspeople. The sheer size of this erstwhile dining room (it would have been eight metres long) has led the team to believe that it was used by upper-class members of Roman society (only high-ranking officers and their guests would have used this space, it's thought). The dining room itself, says MOLA, could have been part of a Roman 'mansio' — a posh inn-type building, offering accommodation, stabling and refreshment. Fragments of the room's vibrant wall plaster were also found during the dig. The larger panel has been dated to the late 2nd/early 3rd century AD, but evidence has also been found of an even older mosaic beneath it; this would have been replaced when the latest Roman styles shifted.

Vojvodina - The bones of 5,000-year-old ‘large men’ covered in red dye have been uncovered by Polish archaeologists in northern Serbia. The archaeologists say the remains of the men, which are significantly taller than earlier finds, most likely belonged to people who arrived from the steppes of southern Russia or Ukraine. Richly equipped with weapons, ornaments and decorated vessels, the bones belonged to men with a height of over 1.8m, about 20 cm taller than previous finds. The research focused on two large mounds in the Šajkaška region in the autonomous district of Vojvodina on the lower Tisza - on the western edge of the Eurasian steppes. In each of the mounds were two spacious, wooden burial chambers. Initially - when the first deceased were buried about 3,000 BC - they were much smaller. After about 100-200 years, when the second burial was dug, their diameters and heights were significantly bigger. The graves we discovered were not spectacularly equipped, but the red colour of part of the bones attracted attention. This was due to the use of ocher to sprinkle or colour the bodies of the dead,” adding that it was a "sacred colour" used during funeral rituals. Both the use of ocher and the above-average height of the dead - men living in this part of Europe at the turn of the 4th and 3rd millennium were usually around 1.6 m tall - indicate that the deceased were newcomers.“The ritual of using ocher and placing individual burials in large mounds is associated with the communities inhabiting the Eastern European steppe areas. A nomadic community came to Europe from the southern steppes of Russia and Ukraine at the turn of the 4th and 3rd millennium BC. They were from the Jamnaya culture and that they significantly changed the cultural situation in Europe.

Sandgrovskaret - More than 40 hunting blinds were discovered on the remote inland mountain of Sandgrovskaret by glacial archaeologists. Hunters would have hidden behind the semicircular stone structures in order to get close enough to shoot at reindeer with bows and arrows, according to archaeologist Espen Finstad of the Secrets of the Ice project. He explained that the reindeer would have traveled into the snow and ice of the mountains to escape biting flies. The hunters, he added, likely lived in the valleys. “In the Stone Age, they would have lived in simple settlements, and during the Iron Age they would have had grand long houses down in the valley,” he explained. The researchers also recovered 32 scaring sticks, which are about a yard long and thought to have been set in the soil with a flag on one end. The reindeer would have traveled away from the flapping flag toward the hunting blind, Finstad said. Five arrows, three with iron arrowheads, were also found. One of the arrowheads is in a style only found in one grave in Norway dated to between A.D. 550 and 600. The other two arrows are thought to date to 800 B.C., based upon their shape.

Tarim basin  - An excavation of a tomb in the Tarim basin in Western China in 2014, revealed a mummified body of man wearing trousers with an axe - indicating he was probably a warrior. A special process, called radiocarbon dating, showed the clothes were made between the thirteenth and tenth centuries BC, making them the oldest known trousers in the world. At that time both men and women would have worn skirts and capes, so it is believed that the trousers were worn especially for horse riding. Now the team led by Mayke Wagner of the German Archaeological Institute in Berlin have found three different textile techniques were used on the one garment. These include twill, a type of weaving which is very durable, and tapestry which was used to create a thicker piece of material at the knees. Amazingly jeans today are still manufactured using twill - suggesting today's pants aren't that different to the trousers 3000 years ago. The researchers also think that the variety of techniques used to make the trousers may have come from different places across Asia, as herders had to move across the land and would pick up new techniques to make their garments. "A diversity of textile techniques and patterns of different local origins, traditions, and times merged into something new in this garment," Wagner told Science News.

Ness of Brodgar  - Analysis of fingerprints found on a piece of Neolithic clay reveals they belonged to two young male potters from 5,000 years ago. The imprint was found on a shred of pot recovered from the Ness of Brodgar excavation site in Orkney. It was first discovered by a ceramics specialist in April 2021 who was examining shreds of clay from the area. Further analysis of a digital model created by specialists revealed another two prints . Only two were sufficiently detailed to analyze, however, the results revealed two different Neolithic males left their mark on the wet clay vessel. Professor Fowler determined one was left by an adolescent or adult male between 13 and 20 years old, while the second print belonged to an adult male between 15 and 22.

Wilderness - Superior National Forest archaeologists recently received lab results revealing that an ancient Native American cooking vessel discovered in the Boundary Waters Canoe Area Wilderness dates back to 1,750 – 1,600 years ago (254-403 common era).. The sherd’s decorative elements are associated with the Laurel Cultural Tradition, which was prevalent in the Upper Midwest and Canada approximately 2,100-1,200 years ago.“The site location and artifacts suggested a long history of ancestral Native American use of the site during the summer months for both fishing and manoomin (wild rice) processing; however, the radiocarbon date gives a really specific point of time to contextualize that use. We are fairly confident we have sites on the Forest that are as old as 9,000 or 10,000 years ago, but it is really rare for us to get a good radiocarbon date to confirm precise dates of human use.