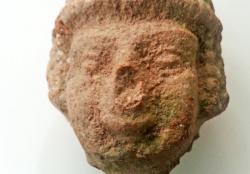 Beit Shemesh‏ - Alon de Groot, an IAA expert on the Iron Age, identified the finding as the head of a sculpture of a fertility goddess. "Figurines of this kind, depicting naked women which symbolize fertility, were common in the homes of residents of the Kingdom of Judah from the eighth century BCE until the destruction of the Kingdom by the Babylonians in the days of Zedekiah (586 BCE)," he said. De Groot added that "these figurines serve in our research as a marker for the area controlled by the Kingdom of Judah." Archaeologist Ana Irich said that the area of Beit Shemesh where the figurine was discovered was a known residential area in the First Temple period. "Beit Shemesh is mentioned as a city in the area of the Tribe of Judah. "In the First Temple period their was a big city in the area, which was a commercial and industrial center. The city was surrounded by a wall that held within it many residential structures, as well as public structures that have been uncovered - warehouses and an impressive waterworks," she said. "Assyrian King Sennacherib sacked Beit Shemesh in 701 BCE, and the destruction of the area was completed in  586 BCE by the Babylonian King Nebuchadnezzar," she added.

Fatehpur Sikri Fort -  Archaeological Survey of India (ASI) has unearthed an elaborate water channel at Fatehpur Sikri Fort during the ongoing conservation work at the site. Officials said the water channel was built to catch and store rain water and water flowing from the hills. They added that efforts would be made to restore it.  Munazzar Ali, senior conservation assistant, Fatehpur Sikri Fort said, "The present structure was hidden under debris in the ridge area near Karwan Sarai. We will try and conserve it. A small tank has also been found. A series of steps were found, which were most probably used to capture the water flowing down from the hill above. There is a tank below where water used to get collected. The tank is further connected to various tanks ahead through water channels. Finally, water falls into a baoli (step well) near Hiran Minar. The entire structure has been unearthed."  Ali added that there are a number of hammams, baolis, and other structure lying hidden. Over the period of time many structures got buried under debris and stones. The area has been lying unattended for many decades now. Now efforts are being made to explore the area and find such structures."  Prior to that, a monument which was earlier identified as a 'ruined bath' (hamam) near Hiran Minar and Karwan Sarai in the Fathehpur Sikri Fort complex had actually turned out to be a 400-year-old shopping complex meant for holding bazaar by caravans visiting the Mughal city.  Moreover, a gateway was also unearthed at centre of the complex which is considered to be used by Mughals to visit the shrine of Salim Chishti in the imperial complex. Besides that remains of a stepped boali (well) have also been found at the site.

Chun Castle – The Oxford Institute of Archaeology is planning to excavate the site of an ancient castle overlooking the reputedly haunted Penwith moor, Carn Kenidjack, near Penzance. The proposed excavation on the Chun Castle site will be carried out by an Oxford team, "One thing that we are particularly interested to explore is evidence of a relationship between Chun Castle and tin mining, which we believe is currently imperfectly understood." Described by researchers as an 'impressive hilltop structure', Chun Castle is a significant site and little is understood about it in the archaeology world. It is thought that much of the stone ramparts were removed in the 19th century, and allegedly used in the building of Penzance's workhouse at Madron. Following an excavation in the 1930s, work has suggested that the site was occupied between approximately the 1st century BC and the 2nd century AD through the remains of pottery fragments, as well as remains of small round hutsand some slags from iron and tin smelting, which were also discovered. Although the castle looks like it could have been a defensive site, today it is believed that imposing structures were built as much as status symbols by local tribal leaders and should not be taken as evidence of constant local conflict. Researchers hope the planned excavation will reveal more about the site's use and its suggested reoccupation in the 6th century. 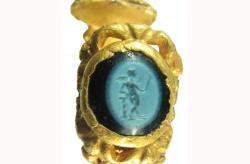 Tangley - An intricately carved gold ring containing a stone engraved with an image of Cupid — a god associated with erotic love — has been discovered near the village of Tangley in the United Kingdom. In the engraving, Cupid (also known by his Greek name, “Eros”) is shown standing completely nude while holding a torch with one hand. The ring dates back around 1,700 years, to a time when the Roman Empire controlled England. The ring was discovered by an amateur metal detectorist. Researchers who studied it say that it may have been worn by a man or a woman and is engraved with spiral designs that contain bead-shaped spheres. 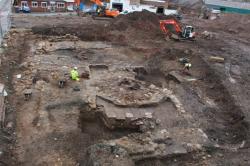 Edinburgh - Digging up the land in preparation for student flats archaeologists have uncovered  the foundations of an industrial mill in Gorgie. Gorgie has a long history, with the name appearing in the charters of Holyrood Abbey in the 12th century and the first mention of a mill in 1236. At this time the area would have been rural in character but over the coming centuries the lands were gradually developed and large-scale industry took hold comprising factories, mills, distilleries and the railway. Headland`s investigations provided the first detailed archaeological evidence for the existence of the J&G Cox mills and glue factory, which operated on the site from the late 18th through to mid-20th century. Although depicted on historic maps, little was known about the form and function of these mills until the current excavations which have uncovered evidence for a complex of buildings and kilns. It is hoped the latest excavations could also provide new evidence for the original medieval mills that may have operated at the same site. This excavation will enable us to better understand the timeline of Gorgie and how the area evolved from its medieval origins through the centuries. 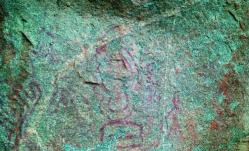 Rukalagundu - Archeologists in Vijayawada have discovered prehistoric rock paintings near Kadiri of Anantapur district of Andhra Pradesh. The rock, locally known as Rukalagundu in Kadiri mandal, was found to have prehistoric paintings dated to Mesolithic times. Dr E. Siva Nagireddy, CEO of The Cultural Centre of Vijayawada, and his team, during investigations in Anantapur district following information given by one Mr P. Anjanappa Naidu, a resident of Potulavandlapalli in Kadiri Mandal, discovered the rock paintings. Mr Reddy said, “We have noticed a few rock paintings which include a lizard, men dancing, hunting tools and geometrical designs, all executed in red ochre, at Rukalabanda, a small hillock located three kms from the village towards the east.” Mr Anjappa Naidu, along with one Mr Mohammed Rafi, who are enthusiastic about historic remains, were the first to spot these paintings. “The rock art is datable to the period between 10000 – 8000 BC. This is based on earlier finds of similar technique and typology at Velpumadugu and Budagavi in Uravakonda mandal and Tenakal and Enugugavi in Kalyandurg mandal by Dr N. Chandramouli, a specialist in South Indian rock art,” said Mr. Reddy. Mr Anjanappa Naidu said, “The hill rock on which the paintings are located is called Rukalagundu because locals use to pay their taxes in cash called Rukas during the British regime, where until recently, village fares were conducted.” The site is near the Kadiri –Rajampet road. Archeologists have asked the district administration, district tourism promoting council and the department of Archaeology and Museums to provide an approach road to the spot, minimum amenities like legend board, signage and to declare it as a protected archaeological site and connect it to the tourist spots of Kadiri, Katarupalle and Timmammamarrimanu in the district.
http://www.deccanchronicle.com/151125/nation-current-affairs/article/ancient-artworks-found-anantapur-district?