Van - A 5,000-year-old ancient city on the shores of Lake Van is in danger of vanishing because it has not been taken under protection. The ancient city, part of which is underground and part of which is submerged beneath the lake, had all the traces of a city and settlement,Bitlis Eren University academic Associated Professor Mehmet Demirtaş said, adding it should be protected from illegal excavators and those who want to use it for commercial purposes. Demirtaş called for the ministry and the Van Cultural and Natural Heritage Preservation Board to take action. “The region has a history of 5,000 years. Lots of findings from the 3rd century B.C. have been unearthed there so far. There are two ancient cities in the district; one is in Şahmiran village and the other is this one on the coast of the lake. It is known as the ancient city of Tatvan. There are rock-carved niches, geometric shapes and paintings. These are the most common features of an ancient city and they were all registered in 1986.” Demirtaş said many structures which had been unearthed during previous excavations remained underground because they were not taken under protection.   “[Potential excavation] work will completely unearth the ancient city.
http://www.hurriyetdailynews.com/vans-ancient-city-in-danger-of-vanishing-.aspx?pageID=238&nID=80182&NewsCatID=375

Burgas - archaeologists discovered an ampoule containing ashes from the grave of St. John the Apostle on the Foros peninsula near the city of Burgas. According to the director of the Historical Museum in Burgas, Milen Nikolov, who showed the leaden ampoule on Wednesday, the sacred substance contained inside it was believed to have healing capacities. It is supposed that the ampoule was brought to the Foros peninsula by a pilgrim, who had been on a pilgrimage to the ancient Greek city of Ephesus (Efes), private bTV station reports. The find is dated to the 6th century, when the pilgrimage to the Holy Lands was particularly widespread. According to legends, every year on May 8, when Orthodox Christians commemorate the death of St. John the Apostle, the healing ashes would rise from his grave. Apparently, the find was very precious as it was placed in the reliquary chamber of the temple of the lost ancient city. The ampoule is extremely tiny, measuring only 22 milimetres in length and having a diameter of 17 milimetres. http://www.novinite.com/articles/167482/Bulgarian+Archaeologists+Discover+Ampoule+Containing+Holy+Relic?#sthash.NKHhnVK8.dpuf 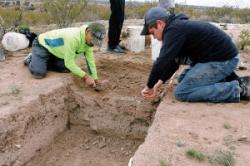 Alamogordo - In accordance with studying New Mexico history and an effort to get kids outdoors, 11 Alamogordo High School students took part in an archeological dig of an ancient kiva east of Tularosa Saturday."We have something really unique here because we've never had a great kiva discovered in the Tularosa Basin before," said Greenwald. Greenwald said the sight of the kiva was probably inhibited from 800 A.D. to 1200 A.D. and the kiva was used around 1000 A.D. to 1150 A.D. He said the area shows evidence that the kiva was burned and the Jornada Research Institute is still searching for clues on why or how it was burned. "We don't know if it was intentionally destroyed, if it accidentally caught on fire or when they abandoned it they decided to burn it," said Greenwald. "Since we've found this particular kiva, we've found a second one farther up the creek so maybe the first one was built in this area and the other one we found maybe a continuation by the same people."During the excavation students found pottery shards along with charcoal pieces as they dug and screened the dirt from the kiva.