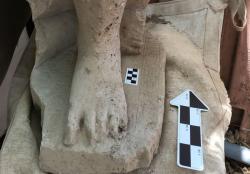 Tel Hazor – A large  limestone fragment of an Egyptian statue depicting an ancient official’s feet, was discovered at Tel-Hazor, north of the Sea of Galilee. Only the lower part of the statue, measuring 45cm. by 40cm. survived, representing the crouching feet of a male figure, seated on a square base, on which a few lines in the Egyptian hieroglyphic script are inscribed. The archaeologists estimate that the complete statue would equal the size of a fully-grown man. Presently, only a preliminary reading of the inscriptions has been attempted, and the title and name of the Egyptian official who originally owned the statue are not yet entirely clear. The statue was originally placed either in the official’s tomb or in a temple – most likely a temple of the Egyptian god Ptah – and most of the texts inscribed on the statue’s base include words of praise to the official who may have served in the region of Memphis, the primary cult center of the god Ptah. They also include the customary Egyptian funerary formula, ensuring eternal supply of offerings for the statue’s owner. The statue – coupled with a sphinx fragment of the Egyptian king Mycerinus (who ruled Egypt in the 25th century BCE.) discovered at the site by the research team three years ago – are the only monumental Egyptian statues found so far in second millennium contexts in the entire Levant. The discovery of these two statues in the same building currently being excavated by the research team indicates the special importance of the building, which was likely the administrative palace of the ruler of the city, as well as that of the entire city of Hazor.

INDE - Jagatgram - Few are aware that on the outskirts of Dehradun near Vikas Nagar exists an almost 2,000-year-old site which is associated with the ancient practice of horse sacrifice or the ritual of Ashvamedha which was conducted by kings to prove their imperial sovereignty. The ritual finds mention in epics like the Ramayana and Mahabharata as well as many other texts. Excavated by the Archaeological Survey of India (ASI) from 1952 to 1954, the site known as Jagatgram, has remains of three fire altars where the horse sacrifices were presumably conducted. However, despite its unique nature, the site hardly attracts any visitors mainly because its approach road is virtually non-existent. Heritage activist Lokesh Ohri told TOI that it was "disheartening to see a place of such great importance lying neglected. The excavated remains of the three fire altars here reveal that they were built in the eagle-shaped Syena Chiti form, where the bird is depicted with its wings spread. According to experts, such altars are extremely rare. In the period between the first and fifth century AD, Jagatgram and adjoining places like Haripur and Lakhamandal were under the rule of the Verman clan. An inscription on the first altar says that King Silavaraman, alias Pona of Yugasaila, who belonged to the Vrishgan gotra, and is believed to have ruled during the 3rd century AD, performed four sacrifices here. (During that period, the western part of the Himalayas was known as Yugasaila). The ritual prescribed that the horse meant for sacrifice would be allowed to roam around for a year. If it was not challenged by any enemy of the king's for one year, the animal would be brought back and then sacrificed, to indicate that the king was an undisputed sovereign. The sacrifices were performed after a gap of five years, ostensibly for the "purification of the state and its subjects." The excavations at the second site have revealed a number of inscribed bricks -- in a standard two by two feet size -- with inscriptions written in the Brahmi script. In the third site, known as Garud Kund, the formation of bricks is in the form of an eagle. All the sites have now been covered with cement and the bricks jut out of the cemented ground.

Avalon - It's considered one of the finest archaeological sites in the country, if not North America, and a quarter century after digging at the Colony of Avalon site in Ferryland first began, it continues to offer up amazing details of early colonial life in Newfoundland. Archaeologist Dr. Barry Gaulton of Memorial University says some test pits dug in the last few days in what is known as "The Meadow" have offered up some unexpected finds.Those include some ceramics from North Devon in England, clay tobacco pipes, bottle glass, and a lot of nails dating to the latter part of the 17th century. They believe they've found a fireplace belonging to a dwelling that may have been destroyed in the French attack in 1696.

Rukmini Nati - Rukmini Nati; an Archaeological site is situated at a village called Chimiri 13 Km from Roing, district headquarters of Lower Dibang Valley district. Another site named after Chimiri as Chimiri Hill site is located 3 Km from Rukmini Nati. The latter is located in a thick jungle approximately 1680 ft. above mean sea level; both these sites are having traces of large number of bricks. Rukmini Nati has two brick structures resembling two rooms while the Chimiri Hill has one such mound. The bricks available at these sites are similar in pattern to that of the bricks in Bhismaknagar and there is also a strong possibility that the Chimiri Hill site, Rukmini Nati and Bhismaknagar are contemporary constructions. Further, it could be stated that Rukmini Nati and Chimiri Hill site are the century points at the time of Chutiya’s King whose centre of administration was at Sadiya in the 11th and 12th century. Thus, it could be assumed that these above mentioned sites are of the Chutiya’s and their antiquity goes back to 11th and 12th century. Rukmini Nati is an Idu Mishmi word meaning a resting place of legendary wife of Lord Krishna as has been mentioned in the epic of Kalika Purana; it denotes the place where Rukmini rested. The Rukmini Nati, is a structure of two rooms made of bricks, traditionally it is believed that the ruins in the hilly terrain north of Lower Dibang Valley between the Chidu and Chimiri villages via Nizamghat route were the extents of the palace of Rukmini. The area is also known as Rukmininagar with the pristine waterfalls and grandiose Mishmi hills at the tip of the eastern Himalayan state of Arunachal Pradesh. According to the legend associated with Rukmini Nati, after defeating king Sisupal, Lord Krishna rescued Rukmini and made her his spouse, subsequently while travelling with her husband, Rukmini had a break at Chimiri village. The place is known as Rukmini Nati in the pages of North East Indian History by the scholars and academicians as well as researchers, religious pilgrims. But some of the facts and events are yet to be ascertained over the speculations about the truth behind the myths and folklores of Idu Mishmi people regarding stories of conjugal ties between Lord Krishna and Rukmini.Others also believe that Rukmini Nati or Rukmini Nagar was the abode of princess Rukmini, the daughter of great king Bhismak.

Comox valley - The area, located at the Puntledge RV Campground off Condensory Road, while extremely rich in midden - a deposit containing shells, animal bones and other items that indicate the site of human settlement - contains a find which Muir best described as “a little mystifying.” Throughout the course of their six-week field school, Muir, along with a fellow SFU professor and 21 third-and fourth-year students, have uncovered around 80 tablets and pebbles at their 100x120m exploration site on the traditional territory of the K’ómoks First Nation. “I’ve never heard of (them) - I was a little skeptical at first. I was in disbelief; I couldn’t believe we found them,” he noted.Muir described the pebbles or tablets as flat pieces of stone with images sketched on one side - symbols which could be interpreted as a tree, feather or a symbol of fertility.

Ness of Brodgar - Archaeologists have found a human arm bone during an excavation of Neolithic buildings at Ness of Brodgar on Orkney. The University of the Highlands and Islands Archaeology Institute, leading the dig, believe the bone was deliberately placed and could be the remains of a respected original founder of the large complex. The site has a huge amount of Neolithic art, a massive enclosing stone wall, houses, and a large building of great significance Archaeologists have been carrying out excavations at the site since 2002 and have found Neolithic buildings, artwork, pottery, animal bones and stone tools. Six years ago, archaeologists found proof that Neolithic people were using paint to decorate their buildings as well as using stone as roofing material.

Side - Excavation teams at an ancient site in the southern province of Antalya are struggling to find sponsors after it emerged that the site contains an ancient brothel, the head of the excavation team, Professor Hüseyin Sabri Alanyalı, has said. Alanyalı said they will wrap up this season’s work early this year, on Aug. 15, due to financial difficulties. “If we can find a sponsor, we want to complete our work at the Temple of Apollo, the Temple of Athena and around the basilica,” he said. He particularly cited the discovery of the brothel as a reason for why the team will now struggle to find new sponsors for the work. “Sometimes we find ourselves in interesting situations. For example, there is a brothel structure at the ancient site of Side. When those who are thinking about sponsoring us ask about the purpose of the structure in ancient times, they change their minds when we say it was a ‘love house’ [brothel] or a ‘toilet,’” Alanyalı stated. This year’s excavation will be carried out by a team of 60 experts, including 30 foreigners, across five areas, he added. Excavation efforts at Side date back to 1967 but they were restarted only after 2009.

Omey - A student from the United States has found a rare kite brooch from the 12th century on Omey Island, Connemara. The brooch, so named because it is shaped like a kite, was discovered by McKenna McFadden during a field trip with New York University led by Connemara-based archaeologist Michael Gibbons. It was identified and confirmed as about nine centuries old by Galway city heritage officer Jim Higgins. Kite brooches were used as pieces of jewellery to fasten a cloak or shawl.