- ROYAUME UNI – Orkney - A Scottish homeowner has stumbled upon a collection of human bones while digging a small mound in his house on the country's Orkney Islands. The skeletal remains date back to the Stone Age era, about 5,000 years ago.  "Nobody had known it was an archaeological site before that," said county archaeologist for Orkney Julie Gibson.
"We have got the assorted remains of many, many people who have been deposited in this tomb at different times," she added.  Archeologists who sent a camera into a crack between stone slabs making up the tomb's ceiling saw an ancient human skull on a pile of muddy bones.  Excavations have revealed about a thousand female and male skeletal parts belonging to different age groups, including infants.  According to Gibson, the site is dubbed the Banks Tomb and is the first undisturbed Neolithic burial site to be discovered in Scotland in 30 years.  Archeologists have also found animal bones at the site which suggests people rarely visited the burial site. "It suggests the tomb was not entirely sealed and that otters were trampling in and out a lot" throughout the tomb's use,” said Gibson.

- ESPAGNE –  Madrid - Historians and archaeologists plan to reveal the true face of the author of Don Quixote of La Mancha, Miguel de Cervantes, as they embark on a quest to find the lost bones of one of western literature's key writers. The project to seek Cervantes' bones, which lie buried somewhere in the walls or floors of a convent in central Madrid, would allow forensic archaeologists to reconstruct the face of a man only known from a picture painted by artist Juan de Jauregui some 20 years after his death. The bones may also reveal whether Cervantes, who is believed to have died of cirrhosis and was accused by rivals of being a notorious tippler, drank himself into the grave. Experts said his bones should be easy to identify as they would bear the marks of wounds suffered during the naval battle of Lepanto in 1571. Cervantes received wounds to his chest and arms during a battle which saw a Spanish-led fleet defeat their Ottoman enemies in the Gulf of Patras off western Greece. Cervantes was buried in the convent after dying at his home nearby in 1616. His death came just 10 days before that of Shakespeare [see footnote]. Cervantes' bones went missing in 1673 when building work was done at the convent. They are known to have been taken to a different convent and were returned later. What nobody knows, however, is exactly where within the convent complex they are to be found. Those planning to search for his bones say they will use geo-radar technology to search for hidden niches in the convent's walls and to scan up to five metres below ground.

- AUSTRALIE – Fremantle - Site works at Bathers Beach have been suspended after asbestos and historically significant artefacts were found. University of Notre Dame archaeologist Shane Burke is assessing the significance of the artefacts, which are believed to be domestic items from the period 1850 to 1900. The artefacts include items such as black glass alcohol bottles, perfume bottles, clay smoking pipes and ceramics. The City said it was “fully prepared” for the possible existence of asbestos at the site and had effected its asbestos management plan. The affected area has been cordoned off and a specialist contractor engaged to remove the material.

Waltham Abbey - A recently acquired rare medieval mount has gone on display at Epping Forest District Museum. The late-medieval silver-gilt crucifix was discovered in February 2009, by local metal detectorist, Craig Carter while searching in North Weald Bassett. It dates to the late 15th or early 16th Century and an unusual arrangement of metal plates on the back of the cross made experts think that it may have originally been a fastener from a larger object, such as a reliquary or decorative book binding. Epping Forest District Museum purchased the item last month with assistance from the MLA/V&A Museum Purchase Grant Fund.  The reward will be shared by the finder and landowner. The crucifix mount joins other important religious items from the same period, including the Waltham Abbey Bible, an Abbots' burial, and the carved stone bust of a king, in the Archaeology Gallery on the ground floor of the Museum. 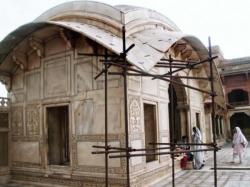 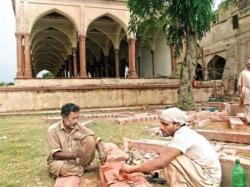 Lahore - The first storey of the Diwane Aam, or Hall of Public Audience, at the Lahore Fort will open for public by the end of the year. Archaeology Department deputy director Afzal Khan said the main veranda was already open for public. He said the first storey consisted of a white marble throne, four bedrooms and a balcony. “Restoration work is underway. We need to complete most of it before allowing visitors,” he said. Afzal said the rooms and balcony of Diwane Aam were closed for conservation in 2009. He said the restoration work included retouching of frescoes in balcony domes, replacing plaster stuccos with marble and laying pipes to drain rain water off the Diwan roof. He said except for the drains all these will be complete by the end of the year. “Laying down drainage pipes will take another year,” he said. Some of the stucco marble has been restored. Restoration of balcony’s eastern side will begin by autumn. “Fresh coats of plaster will be applied to replace those done during the British era,” he said. The restoration of frescoes in the balcony domes will be taken up in the end. “The red bricks in the floor in front of the veranda will also be replaced with red sandstone to restore the structure designed by the Mughals,” he said. Afzal said sandstone was replaced with red bricks during Sikh and British rule. He said white marble railings had been fitted between the 24 outer pillars of the veranda. Workers are still giving finishing touches to the carving on the railings, Afzal said. He said design was supervised by the conservation officer, Mukhtar Ahmed. Archaeologists believe that the original railings bounding the outer pillars of the veranda were removed between 1860 and 1920 by the British. Forty 34-feet high pillars support the rectangular veranda of the Diwan. These and the roof were built to cover the 187×60 square feet area during Shah Jehan’s era between 1640 and 1645 several decades after Diwane Aam was established during Akbar’s rule. The naulakha at the back of the pavilion was also constructed during Shah Jehan’s time. The structure was used as a hospital during British rule. Rooms and balcony were reserved for the British and the pavilion for citizen’s use

- ROYAUME UNI – Ulverston - An archaeological dig may have uncovered a 17th Century brewery in the grounds of an historic hall. Twenty-four volunteers took part in the dig over three days at Swarthmoor Hall as part of the UK-wide Council for British Archaeology Festival of British Archaeology. They excavated on the site of the ‘great barn’, a former working barn linked to the powerful Fell family, and had to get through a metre of rubble to reach telling archaeological features. Ian Lewis, the convener of the hall’s history group, said: “Early maps and photos suggest there was a building (the great barn) on the site where we were digging, but it had been demolished by the mid-19th Century. So we wanted to see if it was there. “And we confirmed it was. We found a wall and a window and various levels. “But from what we found, there is the possibility there was a 17th Century brew house which was associated with Margaret Fell and the hall. “Of course, in those days water was too dangerous to drink. “It was at the northern end of the great barn which was demolished some time in the 1960s. This (the brew house) was probably demolished in the late 1700s.” Mr Lewis said: “We found a large pipe with a diameter of six inches – a ceramic, red, earthenware pipe. “When we put water in, it flowed inwards, not outwards, into the building, so obviously there was something going on in the building which required water. “Secondly, the floor level seems to be very much below ground level. And all brew houses tended to be below in a cellar or semi-cellar for a constant temperature for the yeast.”