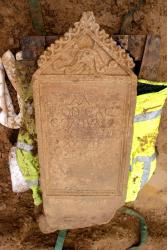 Cirencester - A Roman tombstone of “national significance” has been found in a car park in Cirencester. The tombstone, which is believed to date from between the 1st and the 3rd century AD, was found by Cotswold Archaeology at St James’s Place in Tetbury Road, where construction is taking place on an extension. It is one of the best preserved tombstones that has ever been found in the UK, archaeologists said, and such an intact Roman gravestone has not been discovered for more than 30 years. Archaeologists believe that it was resting on an adult skull before falling on its back and that the skull could be the woman inscribed on the stone. The inscription reads: “DM [Dis Manibus, in the hands of God], Bodica, the wife lived years: 27”. There is a blank space underneath which could possibly have been for a spouse or family member to occupy. It is a remarkable find as the entablature on the top is not damaged, which only happens around 50 per cent of the time, and the inscription is extremely clear.

Zile - A museum is under construction on the castle of Zile, known for Roman Emperor Julius Caesar’s famous phrase “veni, vidi, vici” (I came, I saw, I conquered) to the Roman senate. A stone building, which was established on the land on the right side of the historic castle in the northern province of Tokat, is set to open as a museum when the refurbishments are complete. Zile Mayor Lütfi Vidinel said they would display various artworks in the museum, adding, “We expect to host many tourists when the museum is open. When the Roman Emperor Caesar won a victory against Pharnaces II of Pontus, Caesar wrote this phrase. This is why the castle is known as the Caesar’s Castle. Foreign tourists examine the stone where this phrase is written.” In historical documents, it is reported that Caesar waged a bloody war against Pharnaces II in Zile’s region of Altıağaç. Both sides suffered losses during the war and Caesar wrote this phrase in a letter to the Roman senate. He also built a stone tablet and inscribed this phrase in it. There is also a small Roman theater carved on the rocks in the northeast of the ancient Zile Castle, which was built on a mound. 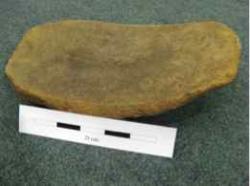 Overmonnow - Monmouth Archaeologists have been in attendance during excavations for car parking near the Clawdd Du medieval bridge at Overmonnow. Current excavations have found little so far since the ground was raised over much of the remains fifty years ago. The site is inside the defences of the medieval suburb of the town, while the Roman industrial town of Blestium extended beyond the ditch beneath some of the adjoining houses. The archaeological society have been involved with Overmonnow and the Clawdd Du since the 1950s and have carried out numerous rescue excavations and watching briefs. Roman and medieval pottery and coins were found during the construction of the bungalows around the site at Goldwire Lane, and even more coins were recovered over the road at Homeforge; that was also where the group revealed remarkably well-preserved 13th century iron forges, as reconstructed by Peter Bere, pictured. During excavations for the foundations of the houses built on the Gilkirk supermarket site next door, Iron Age pottery and wooden structures were revealed by the newly formed professional wing of the society – Monmouth Archaeology. Nearby, a prehistoric saddle quern was found on the builders’ spoil heap; these querns were used as early as the New Stone Age but this one is thought to be late Iron Age as Overmonnow, like all the areas of Monmouth on the bed of the post-glacial lake, has been shown to have been under some six metres of water until then.

USA – Miami -  In the shadows of a condo canyon rising around the mouth of the Miami River, archaeologists have unearthed what they say is concrete evidence of South Florida's escalating rise in sea level. Or brick evidence, to be more precise. Ten bricks. And some coconut palms. "It's the first line of evidence something had really changed here in terms of sea level," archaeologist Bob Carr said Tuesday at the Met Square construction dig on Fourth Street where a team is excavating a 2,000-year old Tequesta Indian village in downtown Miami. The site will eventually be showcased in a towering entertainment complex - a compromise after a contentious debate last spring over preserving the city's ancient history. Carr and his team discovered the submerged bricks, dating to the Civil War, about four months ago along a slice of old shoreline long buried a few feet deep under a parking lot. The find was not unexpected - Carr knew Fort Dallas occupied the site in the 1800s before famed industrialist Henry Flagler built his Royal Palm Hotel and lush gardens at the end of the 19th century. But when Carr started to piece together where the 1860s-era bricks were found - about a foot below the water table - and what he knew about construction, he came to a surprising conclusion: the artifacts provided proof that sea level in the area had risen more than a foot in the last century. Neither the bricks nor coconut palms would have existed on submerged land.

Works on the Salina part of the Coast Road may have to be extended beyond the summer because of a change of plans in order to preserve archaeological finds, Transport Malta said. It said the works are being carried out under the supervision of the Superintendence of Cultural Heritage (SCH) so that proper archaeological investigations are carried out on site. A complete list of discoveries made during the excavation phases for the widening and reconstruction of the road has already been made by the superintendence.  (The superintendence said on Sunday that discoveries during the project included a punic grave, a  fougasse and remains of a Roman structure.)

NEPAL – Tilaurakot - The remains of more than 1.5 lakh items of archaeological importance related to Gautam Buddha were excavated this year’ in Tilaurakot Durbar Square of Kapilvastu. More than 700 items and 1.5 lakh remains belonging to Buddha’s time were found at the world heritage site, said Dr Jennifer Trimley, an archaeologist of Durham University, UK. Researchers at Tilaurakot Durbar found remains of an ancient human settlement. They found clay pots, coal, and structures of houses.

15th century manuscript - A multi-discipline project from Cambridge University has uncovered the hidden secret of Francis I of Brittany – who took an illuminated manuscript made for his first wife, and had it altered to suit his second. The Hours of Isabella Stuart was originally made for Yolande of Anjou, who died in 1440. However two years later, with his marriage to Isabella, daughter of James I looming, he painted over his first wife and added an image of St Catherine using cheaper pigments. Then, when he was later made a duke, the portrait was repainted yet again, to give Isabella a coronet. The revelation comes from the university’s Miniare (Manuscript Illumination: Non-Invasive Analysis, Research and Expertise) team, which comprises experts in art, humanities, science and technology.