Fife - A community archaeology project is helping rewrite the history and architectural development of one of Fife’s oldest churches. Using ground-penetrating radar, geophysical surveys and forensic examination of the remains, the team has been able to reconstruct an image of how Markinch Parish Church looked when Edward I camped overnight at Markinch in 1296. Edward’s chronicler suggested it was a monastery, but no traces of a monastic settlement have been discovered. However, there are indications St Drostan’s was already a religious centre in Macbeth’s time and even before.The group’s research has also identified the footprint of an ancient church under the existing church. Marks etched on the side of the tower show how high the building once stood. It has also been possible to trace how the building was gradually dismantled and eventually replaced by a succession of later buildings as religious practices changed. “It has been a challenge to find out so much about this building without even putting a spade into the ground”, said Bruce Manson of the heritage group. “The team is confident that, over the next couple of years, we will shed much more light on this once-spectacular building and the medieval village of Markinch that surrounded it.” The lost building was once attached to the 12th century tower that has also been the subject of close scrutiny, and a newly discovered Romanesque-style arch will be the subject of future work. The project continues for another two years, with plans to identify who built the church and when, what it might have looked like inside and more about the master builder and his team. 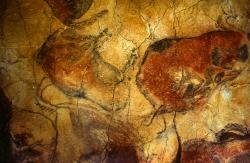 Altamira - The amazing prehistoric Altamira cave has re-opened for limited public viewing after being closed for over a decade.  The cave was discovered in 1868 by a hunter and contains abstract shapes and animal depictions painted some 13,000-to-35,000 years ago by cave dwellers.  Altamira is located in Cantabria, Spain and is a World Heritage site managed by UNESCO. In 2002, when experts determined that the quality of the cave paintings deteriorated due to large amounts of carbon dioxide expelled by human breath, the cave closed.  UNESCO has now determined that groups of five people a week visiting for eight minutes will be allowed for a limited time.  UNESCO will allow the visits until August to see if there is any negative impact from the limited public viewing schedule.  During the testing period some 190 visitors will be allowed inside the cave.  The cave is nearly 900 feet long with the “great lateral chamber” containing most of the paintings. The roof of the chamber is covered with paintings, mostly of bison, painted in vivid colors of red, black, and violet. There are also wild boars, and some horses depicted.  The property represents the peak of Paleolithic cave art that was located across the European continent. 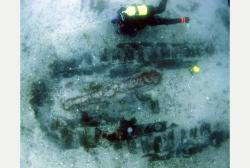 Scilly - Samples taken from a historic shipwreck off the Isles of Scilly are to be radiocarbon dated to determine whether the vessel belonged to Sir Walter Raleigh. It is thought the wreck, which has been called The Lizzy, could have been lost in 1617 when a storm scattered a fleet of 30 vessels as they headed for the West Indies. English Heritage has sent the hull timber samples to be carbon dated after a tree-ring analysis carried out last year proved inconclusive. If proved correct, the ship would most likely have been The Flying Joan, which was lost on one of the last voyages made by Sir Walter Raleigh to discover the mythical El Dorado before he was executed in 1618. 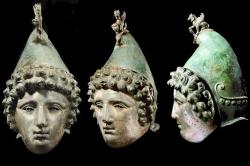 Crosby Garrett - It was almost four years ago that a County Durham father and son unearthed one of the most spectacular archaeological finds of recent years while on a metal detector trip to a remote fellside. In that moment, they came face to face with a transfixing image from almost 2,000 years ago.It was what is now known as the Crosby Garrett Roman cavalry helmet, named after the hamlet in Cumbria 20 miles south of Carlisle, where it was found.The object has two principal components – the helmet bowl which covered the top, sides and back of the wearer’s head and a mask in the form of a human face.The helmet is of a type which would have been worn by Roman cavalrymen taking part in a spectacle called the hippika gymnasia. This was a mock combat featuring two opposing defence and attack teams. “These events would have been part-training, part-display – a sort of Strictly Come Dancing on horseback,” says Dr Mike Bishop.Thought to date from the Third Century, the helmet was discovered at the site of what is believed to have been a Romano-British farmstead. occupied by native people. The find site was investigated by archaeologists who established that it contains substantial Romano-British and prehistoric remains. The area was the territory of the Carvetii, whose capital was Carlisle and who were given self-govering rights by the Romans. “Why the helmet was buried there is a question we may never be able to answer,” says Mike. “It may have been somebody’s heirloom, the prized possession of an old cavalryman who had formed an association with a local woman and settled down, or it may have been stolen and hidden away.” Analysis of the helmet has shown it to be 82% copper, with the face area tinned. This would have produced an impressive contrast of the shiny silvery appearance of the face against the coppery gold of the helmet. The eyes are pierced to allow the wearer sufficient vision, with eyelashes and eyebrows marked. The nose has pierced nostrils and the pursed lips are parted, and separated by a horizontal slit, while the face is framed by curls. On top of the helmet’s cap is the figure of a griffin. A similar griffin was found at Vindolanda fort in Northumberland. The Roman writer Arrian describes face-mask helmets and the events at which they were worn: “The riders, according to rank or because they distinguish themselves in horsemanship, set off with golden helmets in order to attract the attention of onlookers by this means.” Cavalrymen took great pride in their appearance, as shown by their depictions on gravestones. The gravestone of Flavinus, in Hexham Abbey, portrays him wearing a full back to front crest and side plumes on his helmet. As well as the mystery of why the helmet was buried in a fellside field, the find raises questions about the relationship between the Roman army and local peoples.

ROYAUME UNI - Clitheroe  - Archaeologists will resurvey a Clitheroe churchyard to find out how many bodies are buried at the site. The work, which was partially done last year, is part of plans to extend St Mary Magdalene’s Church to form a community space following the sale of the St Mary’s Centre to the Lancashire Foundation. The project may have to be put on hold however as the sale of the existing community centre has yet to go through after months of negotiating. The archaeologists are hoping to discover how many bodies are buried at the site, which has had a church on it for 1,000 years, so the church can draw up plans for the extension without disturbing too many bodies. 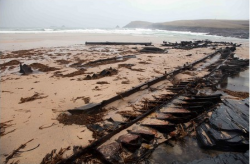 Booby’s Bay- The severe storms off the North Cornwall coast have revealed the wreck of a German ship which went down during World War 1. The remains of the SV Carl surfaced at Booby’s Bay near Trevose Head after tons of sand were washed off the beach by the storms. The pictures were taken by documentary film maker Crispin Sadler of Mallinson Sadler Productions, and an authority of shipwrecks. Mr Sadler said:“ I reckon about a metre of sand has been stripped off this beach and although I have seen some of this wreckage in the past, I have never seen so much revealed as this time. “Its from a ship called the SV Carl wrecked on October 7th 1917. It was a German sailing ship that was being towed to London and broke its tow. The majority of the ship was salvaged and this is all that is left which is remarkably good condition from being under the sand all these years.’’ Mr Sadler said the sand was already beginning to cover up its secret again. “ The sand is starting to return and even in the matter of 24 hours, parts of this wreckage is being covered up.’’