Pompéi - A child’s skeleton has been discovered in a previously unexcavated corner of Pompeii’s central public bath complex. . Archaeologists detected the remains with the use of sophisticated scanning equipment. The seven- or eight-year-old is presumed to have taken shelter in in the baths during the eruption of nearby Mt. Vesuvius some 2,000 years ago. The building did protect the child from falling debris, but he or she most likely suffocated in the clouds of ash produced by the eruption. The pyroclastic flow eventually entered through the building’s windows and sealed the space. DNA analysis may reveal more information about the child.

ROYAUME UNI –  Newark - A moat created to defend Newark Castle during the English Civil War has been revealed as part of sewer works in the town. Severn Trent made the discovery while working on Castlegate. Archaeologists have also found animal bones and green glazed pottery dating from the 13th and 14th centuries. Floss Newman, warden at Newark Castle, said: “This is an incredibly important find for Newark and the castle. “We have read about there being a moat and mention it as part of tours so to have this find confirming the existence of the moat brings it to reality.” The latest discovery adds to several finds already uncovered during Severn Trent’s work, including a defensive ditch along Queens Road dating to the third siege of Newark, in 1645-1646. 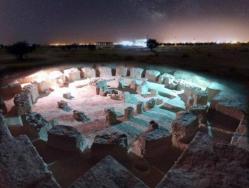 Bastak - The Public Relations Office of the Research Institute of Cultural Heritage and Tourism (RICHT) quoted Ali Assadi, head of the third exploration season in Pargan Tonb in Jenah, the city of Bastak in Hormuzgan Province, as saying on Tuesday that the general structure made over the hill includes an inner circular establishment, an adobe fence around it and ultimately a ditch which surrounds the entire complex. According to the head of the archeology team, the main part of the inner circular structure contains a structure made by 20 rock piers which become completely visible in the current exploration season. He put the diameter of the structure at 16.80 meters and the total area of its inside at 221 square meters, adding that each of the twenty rock piers have similar size and have been built according to the Sassanid architectural style by immersing the stone into the gypsum mortar and their outer surface has been also coated with the same material. The archaeologist added that between the two piers of the building there is a threshold with a width of 60 cm except for the distance between two piers that are situated on the southern side of the circular building which has a width twice as larger than other piers and most probably used as the entrance of the structure. Asadi also pointed to the discovery of a smaller oval-shaped space with 14 stone piers in the middle of the main circular structure in the recent archeological explorations. He said that in the central point of both the circular spaces, there is a rounded column with a diameter of 160 cm and a remaining height of 50 cm the outer surface of which has been coated with plaster mortar. Also, he added there are also two rectangular columns on the both eastern and western sides of the round central column. The archaeologist reiterated that according to the evidence obtained in the course of exploration of the building, the central section of the building had been dome-shaped and the central column of the building was situated exactly below the dome. Asadi pointed to a circular adobe fence surrounding the circular structure with four oval-shaped half towers in the northern, southern, eastern and western directions and noted that finally there is a circular ditch with a width of at least 7 meters around the building. Asadi put the date of the construction of the circular Pargan Tonb monument with regard to a number of coins (Khosrow II) discovered in the course of the explorations of the first and last seasons as well as the style of the pottery and architecture of the building at the Sassanid era.

Gudi thanda - Archaeologists have discovered yet another Kakatiya inscription deep inside the Pakhal wildlife sanctuary. The inscription was found on the pillar of a Thrikuta temple built in Kakatiyan style. The temple is located in a remote hamlet called Gudi thanda (because of the presence of the temple) which falls under the Kothaguda mandal of Mahbubabad district. The locals call it the Rajarajeshwara Swamy temple. The thanda is just a few kilometres from the famous Pakhal Lake. According to Mr Haragopal, the inscription was laid during the time of King Ganapathi Deva (1199-1262 A.D) by one of his vassals and eulogises him as ‘Raja Gaja Kesari’ in the same fashion as the inscriptions found in Bayyaram, Parkal, Hanamkonda, Palampet and Ghanpur. The date and year were not mentioned similar to those found in the above five places. “It is interesting to note that the line ‘Asmaadhyannahi Raja Gaja Kesari vibhramam Ganapatyavaneendrasya’ can be found on both the Pakhal inscription and also this newly-found inscription. It is not an uncommon trend for the vassals to eulogise the kings in the inscriptions they install.  The most common and dedicated eulogy term used for the Kakatiya Kings end with ‘Gaja Kesari’. One more interesting aspect of this inscription is that the letter ‘tha’ has been mentioned which is not found in any other inscriptions,” he said. In the inscription found at Gudi thanda, it is mentioned that the moola Virat (presiding deity) of this temple is ‘Siva-Ramanatha’ and there were some shlokas praising him. On the second side, two persons, ‘Kachaboyadu’ and ‘Mallaboyadu’ have made offerings of milk and ghee for the temple.