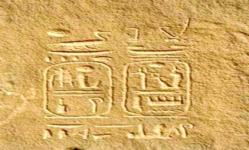 Tayma -  A number of recent archaeological discoveries show that Tayma in Saudi Arabia has been inhabited since the Bronze Age, around the 4th millennium BC.  Recently, the Saudi Commission for Tourism and National Heritage (SCTNH) announced the discovery of a rock near Tayma bearing an inscription of Egyptian pharaoh Ramesses III (1186–1155 BC). This was the first confirmed find of a hieroglyphic inscription on Saudi soil. Based on this discovery, researchers have hypothesized that Tayma was part of an important land route between the Red Sea coast of the Arabian Peninsula and the Nile Valley. In the center of Tayma is a large well, thought to be around 2,500 years old. It is also mentioned in the Bible. The famous Tayma stones, inscribed in Aramaic, of two millenia or older, are now in the Louvre Museum of France, but thousands of other inscriptions of pre-Islamic Thamudic script have been found in the area and are stored in the city’s museum.  The city had long been a stopping place for caravans crossing the deserts of Arabia. According to SCTNH Vice President Ali Ibrahim Al-Ghabban, the discovery of the inscribed rock indicates that Tayma was on an important land route between the western coast of Arabia and the Nile Valley. The route connected the Nile Valley, Port Qulzum, the city of Suez, and then to Srabit near the port of Abu Zenima on the Gulf of Suez. Tayma is also mentioned in ancient Assyrian texts dating back to the 8th Century BC, and is referred to numerous times in the Hebrew Bible. Babylonian King Nabonidus spent 10 years in Tayma. His royal complex is currently being excavated. Last year a fragment of a cuneiform text mentioning Nabonidus was discovered there.  The oldest mention of the oasis city appears as “Tiamat” in Assyrian inscriptions. The oasis developed into a prosperous city, rich in water wells and handsome buildings. Not only this, cuneiform inscriptions possibly dating from the 6th Century BC have been recovered from Tayma. There are three main factors which impact on the historical interpretation of Tayma: The existence of an oasis as a precondition for the settlement of humans; its function as a trade-station on the incense route; and the residence of the Babylonian King Nabonidus in the mid-6th Century BC.  As late as the 11th century, according to historian Al-Bakri, Tayma was known as a wealthy place with a large city wall. Archaeological investigation of the site is ongoing.

Rehman Dheri - Two archaeologists, who began excavation at the historic site of Rehman Dheri in Dera Ismail Khan after a break of 20 years, have found burnt grains of wheat and barley dating back to more than 5000 years. Rehman Dheri is a pre-Harappan archaeological site, which dates back to 4000BC. Archaeologists believe Rehman Dheri is one of the earliest planned or urbanised city found in South Asia to date. Dr Abdul Samad and Dr Zakirullah Jan have found more evidence which show many other socio-cultural aspects of the people, who might have built and lived in this place dating back to pre-Indus Valley Civilisation. “The burnt grains is an evidence that it was an agrarian society,” says Professor Zakirullah Jan of University of Peshawar, who along with director (archaeology and museums) Dr Abdul Samad, had undertaken excavation at Rehman Dheri in March 2015 to dig deeper into the archaeology of the site dating back to pre-Indus Valley Civilisation. The site is located ideally on the major caravan trade routes in South Asia, southern Afghanistan, eastern Iran, Balochistan and Central Asia. The new traces and antiquities found at the site, including pottery in different designs, have convinced the two archaeologists that there were different aspects to the place site, which need to be explored though it is considered the first or earliest urbanised and well-planned city in South Asia. There are some 300 archaeological sites of Indus Valley Civilisation. Those, who worked at the site for years, found all salient features of the Indus Valley Civilisation there like town planning, pictographic writing system, seals and ceramic technology in early form. Professor Zakirullah said Rehman Dheri had all the evidence that it was a literate society as there existed a writing system. And it was also quite mature in town planning as such components were found, which showed that ideas of town planning matured there. Nothing much was available at the site except thousands of broken utensil remains and stones to earlier researchers.

Sagalassos -  2,200-year-old two-story trade building, which was also thought to be used for cold storage, has been found in the Sagalassos ancient city in the Ağlasun district of southern Burdur province. Belgian Prof. Dr. Jeroen Poblome, head of the Sagalassos archeological research site, told Anadolu Agency that while they expected to find just a regular porch, they found a trade building from the 2nd century B.C. Instead. “We didn’t work on a building from that period. The pieces of this building have been preserved. Hopefully, we will acquire the results about this excavation towards the end of August,” said Poblome, adding the first floor of the building contained shops and merchants preserved their food here.  “Also we assume that tax collection was also done on the first floor. The shops might have been rented by the farmers. However, we haven’t yet scrutinized this part. We predict that important meetings such as the ones about trade were carried out on the second floor of the building. They could watch the view from here as well,” said Poblome.  He said the building was 30 meters high and 15 meters wide.  Poblome also mentioned the building was one of the most important artifacts from that period.  “We will first carve around the surroundings of the building and later dig out the interior and thus acquire more in-depth knowledge about the chronology. We are sure it belongs to the 2nd century B.C., but we are not certain whether it belongs to early, middle or late 2nd century B.C.,” stated Poblome. 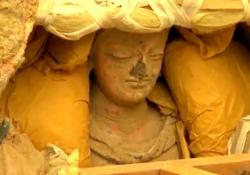 Ainak - Mohammad Yahya Mohibzada, the acting chairman of Afghanistan's National Museum on Saturday reported that more than 1,000 historical artifacts have been transferred to the national museum since Ainak Copper Mine, in Logar, started mining the area in 2009. But he said that a number of important relics, including large statues, are still at the mine and are at risk.

INDE -  Dandumailram - After visiting Dandumailram village, where a massive pit that resembles a tunnel was discovered, Archaeology Department authorities said that the pit has no archaeological significance .

USA – Carlsbad - Archeological discoveries and unexpected landfill debris have delayed work on an $11 million project to widen a section of El Camino Real in northern Carlsbad. Officials won’t say what types of artifacts were discovered at the site, fearing that vandals or treasure seekers might come in and destroy them. San Diego County is well known as a rich repository for archeological artifacts. Native Americans have lived, fished and hunted along the lagoons and in the rolling hills for thousands of years. Human remains believed to be 6,000 years old were uncovered in the mid-1980s during research for a large resort proposed near the Batiquitos Lagoon.  The area around the lagoon is considered by some to have been a center of prehistoric civilization. 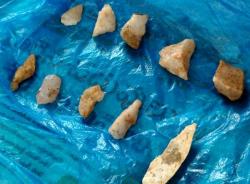 Medak - A tiny village located at Siddipet mandal in Medak district has become the cynosure of all eyes after 30 megalithic burials, believed to be dated between 1,000 B.C. and 200 A.D. were unearthed here. These are spread across 20 acres belonging to Pradeep Rao, a landlord of the village. The burials have huge boulders arranged around them and at least one of these has a Menhir (a tall, huge standing stone) near it. The officials have already found the biggest capstone on the site. Also found were an iron dagger, black pottery and a bowl, and a small sharp stone that was used to cut skin, meat and other food items. One sickle, some pottery and a hunting tool were found on Thursday, officials said. Archaeologists have not ascertained whether the burials were in pits, cists or dolmens, typical of that period.

USA – Naval Weapons Station Yorktown -  In the backyards of some of the Navy's top officers at Naval Weapons Station Yorktown, archaeologists have uncovered evidence that a long-lost Indian tribe's leaders called the same space home. The Kiskiak Indian Tribe was once part of the powerful Powhatan chiefdom in southeastern Virginia, but the tribe disappeared from the historical record by the 1630s after English colonists attacked their village on the York River and eventually settled there themselves. The tribe's location was well documented by Capt. John Smith in his 1612 Map of Virginia and in other documents, but nobody's sure what happened to the tribe after it crossed the York River and settled in an area known locally as the Middle Peninsula. The tribe's disappearance isn't uncommon in Virginia. Archaeologists from the College of William and Mary have dug up artifacts that indicate the heart of the Kiskiak Indian Tribe's village sits on the same bluff that is now occupied by two-story homes with well-manicured lawns that are reserved for the military base's leaders. The officers' housing was originally built in 1920, leaving the area relatively undisturbed by modern farming practices that ordinarily can destroy historical artifacts. 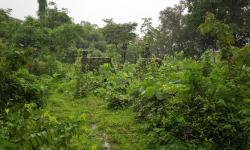 Vichundrem - Considered by history scholars as an excellent specimen of Goa's ancient art history, a temple in Vichundrem, Sanguem, dedicated to Lord Narayandev, and dating back to the Kadamba dynasty (13th or 14th AD), now lies in ruins. One can well imagine the grandeur of the temple complex from the splendid sculptures on the stones and the intricate carving on its laterite walls. The image of Narayandev is carved out in stone and its 'prabhavali' (halo) has the 'dashavtar' figurines representing ten incarnations of Lord Vishnu. The excavation of the temple site was undertaken in 1992 by the state department of archives and archaeology, sources said. Mangesh Deshpande, then superintending archaeologist, had conducted extensive research on the significance of the temple. In his pursuit to literally unearth the treasure trove that lay hidden underneath terra firma, Deshpande camped at the site located in the remote uninhabited area for close to four months, and got the nearly 500 sq m of land excavated. Following the excavation, the garbhagraha (sanctum sanctorum) and the sabha mandap (hall) were clearly visible, and so was the pradakshinapath (path marked for circumambulation). "Following the excavation, we learnt that the complex housed three temples — one dedicated to Narayandev, another to Mahishasurmardini, while the identity of the third could not be ascertained," Deshpande told STOI. Sources said that while the sabha mandap had a thatched roof, the plinth of the Mahishasurmardini temple was found to have been constructed with heavy, well-dressed laterite bricks. Garuda, considered the vehicle of Vishnu, was found in the sabha mandap in front of the idol of Narayandev.