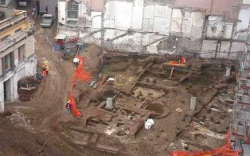 Rome - Archaeologists in Rome have uncovered the remains of an ancient Roman neighbourhood during excavations along Via del Tritone, just off Via del Corso in the city centre. The find comes ahead of major construction works by Spanish retail giant Zara which plans to inaugurate its expanded premises in time for the Christmas 2014 market. The remains include a complex of ancient warehouses and service buildings, as well as residence decorated with mosaics, richly-coloured marble opus sectile floors, and its own spa facility. Excavations on the 4,000 sqm building site, which extends along Via del Tritone from behind the Zara building, began in 2011. There are plans to preserve the ruins and make them visible to visitors, under the new store. The discovery comes more than a year after archaeologists came across the ruins of the Vergine Aqueduct, one of the most important in ancient Rome and which, after almost 2,000 years, still supplies water to the Trevi Fountain. The aqueduct's name derives from the name of its predecessor, Aqua Virgo, constructed by Marcus Agrippa in 19 BC to serve the Campo Marzio district. In 1453 Pope Nicholas V renovated and expanded the Aqua Virgo to enhance the city’s drinking water supply during the Renaissance. 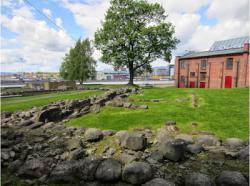 Oslo - The findings, which include an old forge, an iron arrowhead and utensils, confirm that settlement and craft activities extended well beyond what is considered Oslo's medieval town (Middelalderbyen).“Coal and waste from the production suggest that there has been extensive blacksmith work in the area,” said archaeologist Susanne Pettersson at Oslo’s Office of Cultural Heritage. “The forge could certainly date back to the 1600s, but some evidence suggests that it may be even older, possibly dating from the 1500s,” she told Aftenposten-run site osloby.no. The discovery was made following Oslo’s Water and Sewerage Department having been commissioned to create a new zone plan for Klosterenga Park in the capital’s Gamle Oslo district nearby Grønnland. Officials from the Office of Cultural Heritage were therefore hired to check the area for medieval history before work could begin. The fact that the remains were found so close to Hovinbekken – also known as Klosterelva, Nonneelva, and Munkebekken, one of Oslo’s most important rivers – is of little surprise, according to archaeologists. “There were wooden buildings within the city wall at that time. So workshops that involved fire were located outside the perimeter,” said Ms. Pettersson. “It was also natural to build forges near water, and they had the stream here just beside it,” she added. Archeologists also found more remains from a female cloister in Hollenderkvartalet dating back to the 1100s right by Kosterenga.  This time, they believe these might be the building’s ceramic remains, amongst other things. A tiny street dating from the 1500s/1600s was also discovered. A registration process with the Directorate for Cultural History is currently under way. They will decide whether to further excavations in the area.

Kanlıtaş -Marble bracelets that were unearthed in Kanlıtaş tumulus near the İnönü district of the central Anatlian province of Eskişehir date back to 6,000 years ago, showing that the region was a bracelet trading area in the past.  Anadolu University Archaeology Department Associate Ali Umut Türkcan said Kanlıtaş was one of the unique mounds in western Anatolia, adding, “Excavations have revealed a structure 10-15 meters deep underground. The material used in this structure shows us traditional Anatolian architecture. We found more than three dozens of marble bracelets from the early chalcolithic period and the tools used in their production. Kanlıtaş was a marble bracelet center.” 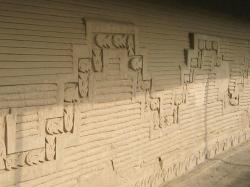 La Libertad - Archaeologists doing a recent routine check of the Chiquitayab archaeological complex in La Libertad in nothern Peru made an unfortunate discovery: parts of a centuries-old wall created by the Chimu culture have been destroyed. Archaeologist Flor Diaz Deza told El Comercio that the road was built approximately 600 years ago and had adobe walls that four meters in height. El Comercio reports that the road was the only access point to the Chiquitayab archaeological site. According to El Comercio, the wall was demolished in order to expand produce fields. The wall was located on the edge of a field owned by Empresa Agraria Chiquitoy (Chiquitoy Agricultural Company). El Comercio reports that the regional culture authorities sent a notarized letter to the company asking them to explain the situation. Empresa Agraria Chiquitoy, however, denies any wrongdoing and insists that they are committed to helping to protect the archaeological sites that border their cultivation areas, reports El Comercio. The regional culture board has also offered to help the municipality where the complex is located to reconstruct the road and to protect sites against future destruction. The Chimu culture flourished in northern Peru from about 900 AD until 1470 AD, when they were conquered by the Inca. The famed citadel of Chan Chan was constructed by the Chimu culture.

Hinckley-A 1,700-year-old lead coffin has been unearthed in a field. The Roman artefact, thought to contain the remains of a child, has been described as a "unique find" and the first of its kind in this area.The coffin, found 4ft under the surface of the field, was laid east to west, suggesting it was one of the first Christian burials in the county.

Karakız - Huge granite sculptures found in the central Anatolian province of Yozgat’s Sorgun district are waiting to be opened for tourism. The Yozgat Museum Director Hasan Şenyurt said the unfinished sculptures were found in the Hapis Boğazı area of the Karakız neighborhood, which served as a sculpture atelier during the Hittite period. “In 1987, this area was taken under protection as the Hapis Boğazı ruins. Detailed scientific research was not carried out in Hapis Boğazı until 2009. The Yozgat Museum Directorate made a joint effort with Hittite University in 2009 in order to unearth a cylindrical architectural structure. In the same year, this area was divided and registered into two parts, the Hapis Boğazı ruins and Karakız Sculpture Atelier.” Şenyurt said they had proved the existence of a settlement in Karakız in mid-1000 B.C. and continued:  “The most important feature of this settlement is that it is close to Hattusha in central Anatolia. Hattusha and other important settlements around it have big buildings in the entrance of the city and there are sculptures in front of these buildings. There is a sculpture atelier here. The Hittites used granite to create huge sculptures. This area is home to this material. We got permission this year from the ministry to remove two lion sculptures from this area and put it in the garden of the municipality. I hope we will do it soon and the sculptures will be brought under protection.”  Şenyurt said there is a wide granite layer in an area in Karakız and added, “There are the remains of lion sculptures and other architectural structures in this area. We see these pieces in a 1.5 kilometer area. We can present these artifacts to visitors in the future in their own place. We have applied to the ministry about the issue.”