Parion - 2,700-year-old water well, one of the nine ancient wells located in Turkey's Çanakkale province, still provides the essential drink that is considered as the "source of life," with special "healing properties" and is attributed to be the source of beauty in the region. Located in the ancient Greek city of Parion in Çanakkale's Biga district, the well still contains water, archeological studies in the area have revealed. According to Professor Vedat Keleş from Ondokuz Mayıs University's Archaeology Department, excavations have unearthed nine wells in the ancient site, which experienced chronic water shortages. "These ancient peoples tried to overcome the water shortage through aqueducts and water wells located in various areas" Keleş told the Anadolu Agency, noting that the village's name in Turkish, "Kemer" is derived from aqueducts. He noted that only one of the wells still has drinking water, which is believed to have healing properties. "Ancient sources mention that this water had healing properties and was beneficial for the skin and stomach disorders" Keleş said, adding that beauty of the women of this region especially had a reputation, which he said could be attributed to this water. Parion, also called Parium, was an ancient Greek city founded in 709 B.C. It had two major harbors during the Roman era, and served as the main "customs station" for Istanbul-bound goods from the Aegean. Archaeologists have been carrying out excavations at the ancient site since 2005. Sarcophagi, and graves, as well as ancient artifacts were found in the area. 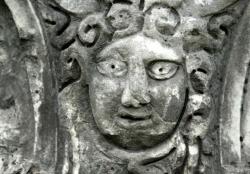 Prusiasad Hypium  - This year's excavation works in the ancient city of Prusiasad Hypium in Konuralp district in Düzce, which is known as "Western Black Sea's Ephesus," have started. Having started in the ancient city, which houses constructions such as aqueducts, the Roma bridge, and the ancient theater protecting itself with steps ornamented by lion claw figures and archways, the excavations are being conducted by the support of the Ministry of Culture and Tourism. Konuralp Museum Director and Head of the Excavation Züleyha Kartal Önemli also reported that they started the summer season excavation works from the door entrance that the visitors use for the ancient theater, which was found in 2015, and they dug a hole here to find the original ground. Önemli said they will continue with the orchestra area after the original ground is found. Düzce University's Department of Archaeology Assistant Professor Ahmet Bilir said, "We can get information about the level of wealth in the area, especially in the Roman Empire period, with the theater and large terrain. We will take the first step of the planned works with our works in the theater's western entrance. Theaters are the first things coming to mind when we talk about ancient cities. We understand that this place is not mentioned in the ancient resources so much but it is a city that has a voice in the Black Sea trade with its amazing architecture. We can find out this from the writings on the grave stones belonging to people from several occupational groups."

Mustabada - Two rock-cut caves on a hill at Mustabada, a sleepy village on the outskirts of Vijayawada, were brought to light on Friday by volunteers of the Cultural Centre of Vijayawada & Amaravati (CCVA) as part of its campaign “Preserve Heritage for Posterity”. These caves are known as Sitarama Gruha on the left side of the pathway to the Siva temple and the second the Siva temple itself. “The villagers added Mahamandapa to the Siva Temple which looks like a modern one. The Sitarama cave, with a big open porch supported by two pillars at the front has walls on either side which forms a small vestibule and a square Sanctum Sanctorum,” said E. Sivanagi Reddy, CEO of the CCVA. The wall on the left side of the cave is carved with life-size image of Trivikrama, an avatar of Vishnu with his entourage. “It is interesting to note that two sculptures of dwarapalakas standing in Tribhanga posture like those of the Nataraja cave at Mogalrajpuram,” said Mr. Reddy. He appealed the Department of Archaeology & Museums to protect these caves. Basing on the iconographic features and the style of art of Trivikrama and Dwarapala sculptures he dated the caves to 7th Century AD, the early phase of the Eastern Chalukyan rule. He surmised that caves might have been chiselled during the Satavahana rule as rainy retreats of Buddhist monks.

Tappeh Gouran - The Public Relations Office of the Research Institute of Cultural Heritage and Tourism (RICHT) quoted head of the project as saying on Saturday that Tappeh Gouran is the first village in Halilan Plain which has cultural sequence of the Neolithic to Bronze era. Among the most important evidences found in the area during explorations in 1960s by the Danish archeology team, human use of cottage and hut could be cited which were transferred to adobe and brick houses over the passage of time, he added. Referring to the uniqueness of the evidence of the settlement in the cottages and mobile life in the layers of the Neolithic era in the Gouran Hill, he said the evidence show well how the early livestock breeders in Halilan Plain would migrate to the plain and take advantage of it in the winter time. He added that the rate of sedimentation in the depth part is about two meters which was identified and registered through excavation in the natural zone surrounding the area. According to the archaeologist, in the project and for specifying the zone, bore holes were made around the area and then detailed documentations was conducted from the surface of the area with a diagnostic approach.