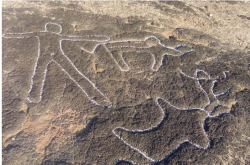 Avalakki Pare - A petroglyph site with over 19 unique rock art dating back to about 10,000 BC has been discovered near Kollur in Udupi district. These carvings at Avalakki Pare, about 15 km from Kollur, were discovered on February 17 by a team headed by Prof T. Murugeshi of the History and Archaeology Department, MSRS College- Shirva. A detailed study is being conducted by the team.As per preliminary studies, the rock art is about 12,000 years old (around 10,000 BC) and carved by people of the Mesolithic age who basically were involved in hunting. The carvings include images of human beings, bison and other animals. An image clearly shows a person hunting an animal indicating that the carving was by those belonging to the hunter gatherer culture. "This site dating back to the Mesolithic age is the oldest petroglyph site found in the Western Coast. There are other petroglyph sites in the region but of a later age. At present we have found 19 rock art and more are expected to surface when we clear the nearby stones,” Prof Murugeshi told Deccan Chronicle. The team has decided to start the study of the region after April. During the vacations, Prof. Murugeshi plans to bring his students to the site and clear the wild growth, grass and the soil on the rocks and try to find more such images. “This proves Kollur and nearby areas had a population over 12,000 years ago. In later days, more habitats might have developed in the region,” he added.

Mangaluru -  A Tulu inscription, dating back to the 12th century and said to be the oldest discovered till date, has been found at the Sri Veeranarayana Temple in Kulashekhara village of Mangaluru. The 14 line, 2- ft. tall inscription was discovered on the left side of the sanctum sanctorum of the temple  in the village, which is believed to have been named after Alupa  king, Kulashekhara. Prof T Murugeshi of the  history and archaeology department of the MSRS College- Shirva and his students have concluded after studying the inscription that it dates back to the 12th century as it mentions the year 1159 AD and talks  about “Kule (Sekhare) Lokontamanta,” which is the exact Tulu translation of “Samasta Loka Vikyata Kulashekhara,” the Kannada title of king Kulaskhera. “The inscription is very important for the information it provides about the Alupa dynasty. The first inscription found of Kulakshekara dates back to 1162. But now with this inscription we know that he was in power by 1159,” he adds. 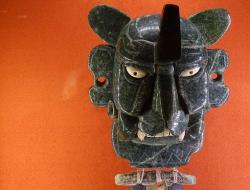 Monte Alban - This strange and sinister jade mask was discovered by archeologists excavating a tomb in the ruins of the ancient city of Monte Alban, once the heart of the powerful Zapotec civilization.  It’s believed the mask was created between 100 BC and 200 AD at the height of Monte Alban’s dominance of the region. It’s made out of 25 pieces of jade, a green stone highly valued to Mesoamerican civilizations, with yellow, piercing eyes made from shell fragments. Now on display at the National Museum of Anthropology in Mexico City, it is known as the mask of the Zapotec bat god. Bats were highly symbolic to the Zapotec civilization and in the wider Mesoamerican cosmovision for a number of reasons. Due to the winged animal’s habitat in caves, tombs, temples, and tree roots, the Zapotec bat god was related to the sacred world of the dead and the spirit ancestors that roamed the underworld. The nocturnal behavior of these animals strengthed this significance, as nightfall was symbolic of death and spirits. But there is another, even more chilling symbolism that bats held to the ancient Zapotec people. The vampire bat is a species native to most regions of Mexico and is particularly common in Oaxaca where it feeds on the blood of mammals, including that of human beings. Due to the sanguinary diet of this animal, it became associated with the rites of bloodletting and human sacrifice that were practiced to honor the gods and secure bountiful harvests of the maize crop that fed the civilization.

Zhokhov - Ancient obsidian tools have been found at a Mesolithic site in the Arctic Circle by a team of researchers led by Vladimir Pitulko of the Russian Academy of Sciences. Pitulko said the small settlement on what is now Zhokhov Island was inhabited by 25 to 50 people of the paleo-Arctic Sumnagin cultural complex, who hunted, fished, and lived in reindeer-skin tents. The small number of volcanic glass tools, found among some 19,000 stone tools and other objects made of antler, mammoth ivory, and bone, have been dated to between 8,000 and 9,000 years ago, when sea levels were lower and the island was still connected to mainland Siberia. Chemical analysis of the obsidian indicates it came from the Lake Krasnoye region, more than 1,000 miles away from the site. Pitulko and his colleagues suggest the obsidian could have been carried by traders traveling by dogsled, since traces of wooden sleds, and the remains of dogs who would have weighed around 55 pounds—the size of dog used to pull sleds today because they have sufficient strength but are not so large that they overheat—have also been recovered on the island.