Antiocheia - What could be considered an ancient motivational meme which reads “be cheerful, live your life” in ancient Greek has been discovered on a centuries-old mosaic found during excavation works in the southern province of Hatay. Demet Kara, an archaeologist from the Hatay Archaeology Museum, said the mosaic, which was called the “skeleton mosaic,” belonged to the dining room of a house from the 3rd century B.C., as new findings have been unearthed in the ancient city of Antiocheia. “There are three scenes on glass mosaics made of black tiles. Two things are very important among the elite class in the Roman period in terms of social activities: The first is the bath and the second is dinner. In the first scene, a black person throws fire. That symbolizes the bath. In the middle scene, there is a sundial and a young clothed man running towards it with a bare-headed butler behind. The sundial is between 9 p.m. and 10 p.m. 9 p.m. is the bath time in the Roman period. He has to arrive at supper at 10 p.m. Unless he can, it is not well received. There is writing on the scene that reads he is late for supper and writing about time on the other. In the last scene, there is a reckless skeleton with a drinking pot in his hand along with bread and a wine pot. The writing on it reads ‘be cheerful and live your life,’” Kara explained.  Kara added the mosaic was a unique finding for the country. “[This is] a unique mosaic in Turkey. There is a similar mosaic in Italy but this one is much more comprehensive. It is important for the fact that it dates back to the 3rd century B.C.,” Kara said. She also said that Antiocheia was the world’s third largest city in the Roman era, and continued:  “Antiocheia was a very important, rich city. There were mosaic schools and mints in the city. The ancient city of Zeugma in [the southeastern province of] Gaziantep might have been established by people who were trained here. Antiocheia mosaics are world famous.” 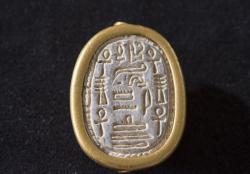 Tel Dor - The University of Haifa announced on Sunday the discovery of a rare scarab seal belonging to a senior official of the Thirteenth Pharaonic Dynasty, which reigned in Egypt during the 18th-17th centuries BCE. Birdwatcher Alexander Ternopolsky found the engraved stone seal at the coastal excavation site located south of Haifa before handing it over to an archeological authorities. According to initial studies of the scarab, stone engravings reveal the the name of the seal's owner, his position along with symbolic hieroglyphics.  The scarab must have belonged to a very senior figure in the kingdom, probably the viceroy responsible for the royal treasury,” she stated. “The owner of this scarab filled a similar position to that held by Joseph in Egypt after he interpreted Pharaoh's dreams. The coastal city of Dor served as a key hub for thousands of years until the Romans built Caesarea.

Sharda - Civil society on Sunday raised concerns over a new construction inside the compound of Sharda temple, a centuries-old religious place and now an archeological site, near the Line of Control in Neelum Valley district of Azad Jammu Kashmir. “We people consider this ‘wooden cabin’ inside historical compound as encroachment,” said Sardar Aurangzeb, a local journalist. “This (cabin) is start of encroachment,” said Amir Ali, a local archeology student. “I can expect a concrete structure here in coming days,” he said. Some five years ago, the department lunched a project for the preservation of the Sharda temple but it was not completed due to lack of funds. The parts of the temple have vanished and the rest area around it is covered by the security forces.