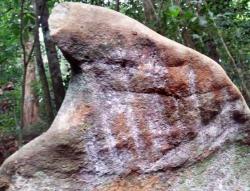 Maruthom - Experts from the State Archaeological Department will visit the Maruthom forest area in Balal panchayat here on Sunday to study the ancient monuments discovered there.They had found a block of 20 stone sculptures with crude forms of images in hard stone, near the upcoming Ranipuram Hill resorts. The stone sculptures looked like the pillars of a massive cave, Dr. Koroth said. The entrance to the cave is damaged following soil erosion over the decades. Scripts, including Tamil and Brahmi, are found on the pillars. The lack of megalithic monuments such as cists, dolmens and umbrella stones in the surroundings suggested that the Maruthom archaeological site belonged to the Neolithic age, he said. Lot of crude imprints of animals such as elephant, dogs, cows and wild animals were found carved on the rocks. The uniqueness of the site was noted some 15 years ago by local people who believed that the spot had some religious significance, he said. 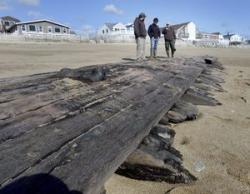 Salisbury - Low tide yesterday morning gave state Board of Underwater Archaeological Resources director and chief archaeologist Victor Mastone a chance to get up close to the large-sized artifacts that were once part of an old wooden ship. They were discovered on Salisbury Beach Tuesday evening, but by the time Mastone visited on Wednesday afternoon, high tide had hidden the remains under feet of water, giving him only The Daily News’ photos to examine.Although there are smaller segments of the wreck washed up on the beach, the two biggest are both part of the side of a hull. Their curve and planking indicate they’re from the stern of what was most likely a schooner that sailed in local waters perhaps in the 19th century, Mastone said. Schooners were the “tractor-trailers of cargo ships in the 19th century,” picking up and delivering goods, he said, like lumber and general merchandise throughout the region.The two large artifacts, now broken apart, would fit together like pieces of a jigsaw puzzle if put back together. If reunited, they’d be about 65 feet long, Mastone said, and an educated guess could be made that together it once stretched along about half the side of a ship.  The planking — outer skin — is made of oak, he said. Upon inspection, visible indicators led him to speculate it could have been constructed originally in the post-Civil War period of ship building, from 1865 to 1875. There are other signs, however, that at least this portion of the ship underwent repairs later in its life, around the turn of the century, he said. Using those parameters, local historian Carolyn Sargent’s book, “Salisbury History,” offers a few possibilities.  They include the ill-fated Jennie Carter, although Mastone rejects the notion, since its shipwrecked spine is still ensconced in the sands of Salisbury’s shore. According to Sargent, the Jennie Carter was a 130-foot, three-masted schooner, built in Maryland in 1874 and sunk off the coast of Salisbury in 1894.  The 133-foot-long, 32-foot-wide, 286-ton schooner Florida out of Portland, Maine, built in Belfast in 1872, according to Sargent, was wrecked on Salisbury Beach on Feb. 9, 1896. The dimensions and time frame fall within Mastone’s speculations.  The Florida headed “broadside into the breakers,” according to observers who sent up the alarm to the Life Saving Station on Plum Island.

Lewes - Skeletons discovered at a mass grave at a medieval hospital are believed to date from the Battle of Lewes. Four of them have now been tested by experts who revealed the dead men suffered from multiple wounds to the head inflicted with a sword. Last year initial tests had revealed one of the skeletons dated from around the time of the Battle of Hastings, but this has since been disproved.

Rumkale - The historic Rumkale (“Roman Castle”), which was home to many civilizations throughout history and an important center for early Christianity, has been undergoing a restoration process for more than two years.  Rumkale and its vicinity, which straddles the boundary between the southeastern provinces of Gaziantep’s Nizip and Yavuzeli districts and Şanlıurfa’s Bilecik and Halfeti districts, is home to structures from the Urartu, Babylon, Sumerian, Seljuk and Ottoman eras.  Johannes, one of the apostles of Jesus Christ, is said to have settled in Rumkale during the Roman era and reproduced copies of the Bible. The area was occupied by various Byzantine and Armenian warlords during the Middle Ages. The castle served as the seat of an Armenian patriarch in the 12th century. From 1203 to 1293, it was the residence of the supreme head (Catholicos) of the reunified Armenian Church. In 1293, it was captured by the Mamluks of Egypt, following a protracted siege.  Restoration work is currently continuing in the Barşavma Monastery, which was built in the 13th century and is located in the north side of the castle. 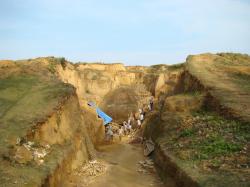 Charaideo Maidam - For the first time in the northeast, a team of archaeologists will conduct DNA tests on skeletal remains excavated from a burial mound of the famed Charaideo Maidam to determine their origins. The team will find out whether the remains belong to members of the erstwhile Ahom royal family by extracting DNA and comparing it with that of living descendants of the royal family.Though the human remains were collected from Maidam number 2 (a burial mound at the Ahom monument of Charaideo) almost a decade ago, they were analyzed only recently. Five skulls are part of the remains, but it is believed that six persons were buried in the mound.Twenty DNA samples were collected from the remains and 16 samples were collected from living male members of the royal family. Two samples were collected from female members who married into the royal family and two from members of other families."The purpose of the comparison is to find out if the skeletal remains belong to a king or to plunderers. For centuries, the mounds of Charaideo were plundered. The DNA analysis will reveal the truth," said Madhujyor Rajkonwar, a member of the royal family."Earlier, we believed there were five individuals, but now, it is clear that six individuals were buried.There are more than 130 maidams or burial mounds in Charaideo. Ahom nobles and family members were all buried there. The mounds are considered to be holy and carry a sentimental value for the Tai Ahom community.

Petras - The cemetery consists of 12 large house tombs each comprising 6-10 rooms. These are completely or partially excavated. Some of them are connected with open areas reserved for burial ceremonies. Near the house tombs a rock shelter contained tertiary burials dated EMI-MMIB, probably coming from the cleaning of one house tomb. Furthermore, excavations have revealed that a LM IIIC settlement was established on the hilltop after the abandonment of the main settlement on Hill I. A LM IIIC megaron, connected with a perivolos and a platforms was erected on top of the ruins of one house tomb. The most recent find of the Petras excavations consists of the remains of  EM II domestic deposits, found underneath  EM III house tombs. The pottery has strong Cycladic connections. 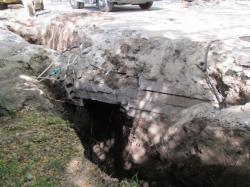 Plovdiv - Construction workers laying water supply and sewage pipes in the southern Bulgarian city of Plovdivhave stumbled upon an Ancient Roman wall, possibly the western wall of the Forum of ancient Philipopolis, and have even managed to damage it.