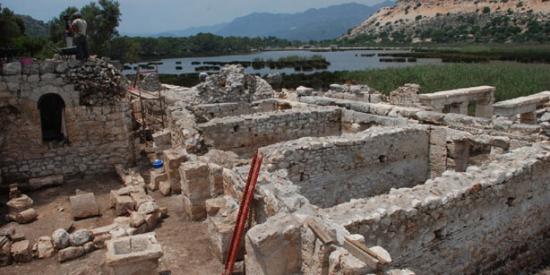 Myra - Archeologists have found a new historical monument and nearly 20 masks thought to have been worn by actors during excavations carried out in Myra, an ancient city on the southern coast of Turkey.   The excavations of the site are being carried out by Akdeniz University's Archeology Department under the supervision of Professor Nevzat Çevik, from the same department. Çevik told the Anatolia news agency that they found the monument and the masks during excavations they carried out beneath the city's stone-built theater. “This is a monument built by a noble woman from Myra to honor her family. … According to data we obtained, we have found a monument which was built between 1 and 2 B.C. Çevik added that they think more historical items lie beneath the theater. Known today as Demre, Myra is among the top historical sites in Turkey. It was a thriving port in the Byzantine period and was made the capital of the province of Lycia by Emperor Theodosius II in the fifth century. 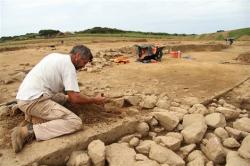 - PAKISTAN - Shahji Ki Dheri - An ancient site that Chinese traveller Hiuen Tsang 1,400 years ago described as the “tallest architectural building” in this part of Asia has been found again in Pakistan after it receded into oblivion following its excavation over a century back. A joint team of the Directorate of Museum and Archaeology and Tourism Corporation Khyber Pakhtunkhwa has re-ascertained the exact location of the Shahji Ki Dheri, a historical Buddhist site. The site had gone into oblivion after it was rediscovered and excavated by archaeologists more than a century ago. Located close to the walled City of Peshawar, an imposing stupa had once stood there. It was built during the reign of Kushan Emperor Kanishka in the first century AD. Hiuen Tsang visited it during his travels in 629AD-645AD and described it as the “tallest architectural building” in this part of Asia. Dawnsaid it is estimated that the stupa was equivalent to a present day 13-storeyed building. In 1908, archaeologist D. Brainerd Spooner undertook excavation work at the site and found the ruins of a stupa and monastery. A year later, Spooner discovered a relic casket in gilt-bronze that contained Buddha’s bone fragments and ashes. The casket was inscribed with Emperor Kanishka’s name and figure. The Buddha’s relics were gifted to Myanmar while the bronze casket is on display in Peshawar Museum.

- ARABIE SAOUDITE – al Maqar - Saudi Arabia is excavating a new archaeological site that will show horses were domesticated 9,000 years ago in the Arabian peninsula. The discovery of the civilization, named al-Maqar after the site's location, will challenge the theory that the domestication of animals took place 5,500 years ago in Central Asia, said Ali al-Ghabban, Vice-President of Antiquities and Museums at the Saudi Commission for Tourism & Antiquities. "This discovery will change our knowledge concerning the domestication of horses and the evolution of culture in the late Neolithic period," Ghabban told a news conference in the Red Sea port of Jeddah. "The Maqar Civilization is a very advanced civilization of the Neolithic period. This site shows us clearly, the roots of the domestication of horses 9,000 years ago." The site also includes remains of mummified skeletons, arrowheads, scrapers, grain grinders, tools for spinning and weaving, and other tools that are evidence of a civilization that is skilled in handicrafts.

- BULGARIE – Perperikon - A hermetically-sealed cross that also served as a reliquary, said to date from the fifth to the sixth century CE, has been found at ancient holy site of Perperikon. The cross was reported to be in good condition. The find was decorated on the outside with early Christian symbols. The contents of the cross-reliquary would be established only after examination by specialists. Similar reliquaries were used to keep items purported to be fragments of the relics of saints, the blood of Jesus, pieces of the cross on which Jesus was crucified, and more rarely, hair or tears from Mary, the mother of Jesus. Archaeologist Professor Nikolai Ovcharov said that an amulet said to have contained hair from Mary and that was worn by ninth-century emperor Charlemagne was kept in a cathedral in Reims. Recent finds at Perperikon have reinforced conclusions that while the site dates back to ancient times and religious faiths, it was also used by Christians as a place of worship.

- ROYAUME UNI  - Shrewsbury - Medieval human remains could be lying underneath an area of land proposed for a new building at Shrewsbury Sixth Form College, archaeologists have claimed. The area earmarked for the building is thought to have once been part of a cemetery for the Augustinian Friary, known as the Austin Friars, which established its first house in Shrewsbury in about 1254. Archaeologists say the area has been identified by the Shrewsbury Urban Archaeological Assessment as a “key site” for the recovery of skeletal remains which could provide information on cemetery populations. “It is considered that the cemetery will contain a closed group of remains that would yield data on population and demography, disease and pathology.” According to the report, at the beginning of the 19th century, the antiquarian Reverend Hugh Owen commented on “the great quantity of human bones that have been from time to time dug up in the precinct” of the friary. In 1910, six human skeletons, one of which was enclosed in lead, were found on the sixth form site at a depth of 2.1 metres during excavations for the boiler room. And in 1984, human remains were found at a depth of between 1 metre and 1.5 metres between two of the present college buildings.