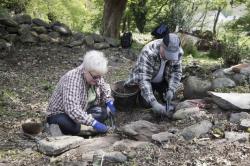 Cae Celyn  - Clear evidence of a Roman road has been found during an archaeological dig close to the home of a Welsh Prince.  A section of a metalled road on the line of the Roman road from Caerhun to Segontium (Caernarfon) was found during excavations at Cae Celyn, a field near  Garth Celyn at Abergwyngregyn. Peter France of Wirral Archaeology, an expert on Roman roads, said a massive section of the Roman military road that led from Chester to Segontium had been uncovered.

Kirkhope Tower - People nowadays invest the age of the Border reivers with a romanticism, but the reality is it was a brutish and impoverished time. That’s the view of Peter Clarke, owner of A-listed Kirkhope Tower deep in the Ettrick Valley, following a major archaeological dig at his home last summer. The team from Addyman Archaeology in Edinburgh has now produced its final report into the excavations which, while not uncovering any hidden treasure, did shed further light on what life was like in the 16th century. Built originally by the infamous Scotts of Harden, Kirkhope Tower was transformed from a virtual ruin by Mr Clarke and his late wife, Gillian. It was in 1544 that Henry VIII ordered the Earl of Hertford to take his army up from Berwick to burn and destroy “putting man woman and children to fire and sword without exception” across the Borders. One place destroyed was Kirkhope and last summer the soot-blackened remains of the pillage were excavated by the team of archaeologists from Edinburgh. The excavations revealed no human skeletons nor any gold or silver, but what was found was an extensive courtyard range of buildings. “Kirkhope seems to stand alone on its hillside but now we can see it was only a part of a much larger place which must have accommodated many people beyond the Scott family,” added Mr Clarke.

CHINE – Chongqing - Twenty ancient tombs have been discovered near the Three Gorges Reservoir in southwest China's Chongqing Municipality, archaeologists said Saturday. The tombs, which date back to the Han Dynasty (202 BC - AD 220), were discovered at the Ma'anshan Tomb Site on the bank of the Yangtze River in Fengdu County, according to the municipal cultural relics and archaeology institute. Archaeologists have found more than 430 artifacts in the tombs, including pottery, bronze and iron ware. The toms and artifacts will help archaeologists gain greater insight into local funeral customs, as well as social and economic conditions during the Han Dynasty, the institute said.  The Three Gorges Reservoir is on the upper-middle reaches of the Yangtze, China's longest river.

Srirangam - The Department of Archaeology has planned a series of excavations — the first-ever — in the famous temple town of Srirangam, which also happens to be the chief minister Jayalalithaa’s constituency.  “The main objective of the excavations is to find out the historical antiquity of Srirangam,” a senior official of the department told Express. “We want to discover the ancient significance of the town.” Despite strong literary evidence pointing to the antiquity of the temple town — it finds mention in Sangam literature — no significant excavations have been carried out there so far. “There is reference to Srirangam in Ilango Adigal’s Silapathikaram. A character called Malavan, on meeting the author of the epic, recounts his experience of having had darshan of Lord Vishnu in three postures, standing (Tirupati), seated (Azhagarmalai) and reclining (Srirangam),” she pointed out.  Interestingly, diggings will be carried out inside Sri Ranganathar Swamy Temple as well as around its vicinity. The move comes after renovation works at the 1,000-pillar mandapam inside the famous temple partly revealed buried figures. “The head portion of two elephants drawing a chariot-shaped structure is partially seen and, hence, we want to carry out more excavations to find what lies beneath the structure,” the official said.  A systematic survey of the town in the past by archaeologists had led to findings such as pottery, artifacts and beads and the perception is that the history of the town could date back to as early as 300 BC. Hence, the present proposal aims at finding adequate material evidence to find out the true antiquity of the temple town. The State government has also sanctioned `2 lakh for the excavations, she added.

Gloucester - An exhibition is being held in Gloucester to display Roman artefacts and other finds, uncovered in gardens as part of a history project.  The Kingsholm area was the focus of History on Your Doorstep, a project run by Gloucestershire County Council. Kingsholm was the site of the first Roman military fort in Gloucester. Finds ranged from early Roman pottery, 16th century clay pipes, Georgian glass bottles and a tube of hair dye from the 1960s. Fourteen test pits were excavated in the gardens of Kingsholm residents.

Tartu – A yet-to-be identified, intact, male skeleton has been excavated from a brick tomb at the Tartu Cathedral, despite archaeologists' initial worry that the tomb would be empty.  The tomb, dating back at least to the mid-16th century, was found in March during renovation work. Digging further to a depth of 1.8 meters, archaeologists found a skeleton buried in a decomposed wooden box, a statement from the University of Tartu said.  “We found no personal belongings with the deceased, but [we found] plenty of coffin nails and some rotten wood. We're hoping that further analysis will show us the type of wood the coffin was made of, and with that, the period of the interment,” said the university's archaeologist Martin Malve. “We can currently say that the skeleton originates from the 13-15th century, when tombs were actively used for burials. The skeleton belonged to a man aged 40-50. Initial examination shows that the teeth were relatively unworn; there were a few teeth missing from when he was alive, as well as plaque and dental cavities. The right elbow [...] had a healed bone fracture that could have resulted from trying to stop a fall,” Malve said.  The skeleton is undergoing further analysis at the University of Tartu's human bones repository. The university's history museum, which is located at the site of the ruins of the Tartu Cathedral, hopes to put the find up on display by the end of summer.  The university's experts have previously said that the find is one of the rarest in Estonia. 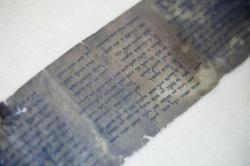 Nearly 70 years after the discovery of the world's oldest biblical manuscripts, the Palestinian family who originally sold them to scholars and institutions is now quietly marketing the leftovers - fragments the family says it has kept in a Swiss safe deposit box all these years