Baker's Flat  -The oldest known Australian example of a communal type of Irish settlement has been 'unearthed' in a dusty paddock in rural South Australia. An extensive geophysical study of the Baker's Flat Irish settlement site near Kapunda has found the first - and possibly largest - clachan in Australia, says Flinders archaeologist Susan Arthure whose PhD investigations of Irish history and archaeology in SA led her to the site in what appears to be a featureless paddock near the former mining and farming community. "Clachans had actually died out in Ireland by the end of the nineteenth century but our research proves they continued in Australia, with this example the first to be fully described," says Irish-Australian archaeologist Ms Arthure. "We found a large, vibrant clachan settlement, now hidden beneath the surface of an empty farm paddock, which contains a wealth of materials to tell us a lot about the past," she says. "This traditional Irish settlement style, characterised by clusters of houses and outbuildings, highlights the way the new residents to this dry country worked together to make the best use of marginal land. "More than 500 Irish migrants created a community here.

Vallée des Rois - A series of hidden chambers at the 3,400-year-old tomb of Tutankhamun in Egypt’s Valley of the Kings could be the final resting place of 'mysterious' Queen Nefertiti. The famed female pharaoh ruled Egypt from 1353 to 1336 BC and was either mother or step-mother to King Tut - Egyptology believed she was laid to rest in the Valley of the Kings but her tomb has never been found.  A team of archaeologists, led by former Egyptian minister of antiquities, Mamdouh Eldamaty from Ain Shams University, used ground penetrating radar (GPR) to uncover the hidden secrets of the ancient tomb. Radar surveys found corridors a few feet from Tutankhamun's burial chamber that seem to lead to a larger 32ft wide room with 6ft high ceilings. The large room was found within the bedrock a few feet to the east and at the same depth as Tutankhamun's chamber. and some Egyptologists believe it could be the missing tomb of Nefertiti.The unpublished paper, reported on by Nature, resurrects a long held theory that claims within the tomb of King Tut is a larger tomb where the mysterious Queen Nefertiti is buried.   Some Egyptologists claim that before Tutankhamun's reign in the 14th century BC Nefertiti ruled as pharaoh but her tomb has never been found. Experts believe due to her huge influence and cultural importance in ancient Egyptian history, she should have a tomb at the famed Valley of the Kings.  Eldamaty and his team believe this chamber they have found off the tomb of King Tut may have be Nefertiti's final resting place.  Researchers don't know whether the new space is physically connected to Tut's tomb, but say the fact it is perpendicular to the main space suggests it is joined. The team were studying a theory that Tutankhamun's tomb is unusually small for a royal burial site and so must contain hidden burial chambers. 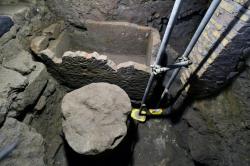 Rome - An ancient tomb thought to belong to Rome's founder Romulus will be presented to the world on Friday, bringing to a head months of investigation by history sleuths. The 6th century BC stone sarcophagus, with an accompanying circular altar, was discovered under the Forum in the heart of Italy's capital decades ago, but experts could not agree on whether or not it belonged to the fabled figure. According to legend, Romulus founded the city after killing his twin brother Remus. The brothers had been raised by a she-wolf -- the symbol of Rome shows them sucking at her teats -- but later fell out over where to build the new metropolis. Historians have long been divided not only over whether the pair actually existed, but if so where Romulus' body -- which was reportedly dismembered after his death by angry senators -- may have been buried. The Colosseum Archaeological Park, which manages the Forum where the sarcophagus lies, said recent clues all pointed to it being the founder's tomb, in what it labelled an "extraordinary discovery". The Forum was the beating heart of the Roman Empire and historical sources refer to Romulus's possible burial in that area. No bones were found inside the sarcophagus. "These two archaeological objects (sarcophagus and altar) have given rise to a hypothesis we can now debate," Italian archaeologist Paolo Carafa told AFP. Romulus, made popular by writers such as Livy, Ovid and Plutarch, is said to have ploughed a square furrow around the Palatine Hill to demarcate the walls of the future city. When a mocking Remus hopped over the "wall" to prove how ineffective it would be against invaders, his brother killed him. A team of scientists carrying out a dig in the late 1980s discovered a long, deep gash marked by large stones, which they claimed was the "sacred furrow" ploughed by Romulus. Legend has it he went on to establish the Roman senate and rule as the city's first king for nearly 40 years, before disappearing into thin air one day while out inspecting his troops. Some versions of the tale have him taken up to heaven by the god of war while others have him brutally murdered by jealous senators who tore him limb from limb and scattered his body parts across the city. There may consequently have been no body to bury. In any case, Romulus acquired a cult following, making it more than plausible that the ancient city built a shrine to its beloved legendary -- and possibly mythical – founder. "Whether Romulus existed or not is not important," Carafa said. "What matters is that this figure is considered by the ancients to mark the political birth of the city."

Staré Město - Seven graves dated to the second half of the ninth century A.D. have been unearthed at a large cemetery site in Staré Město, near the town of Uherské Hradiště. The cemetery dates to the time of the Great Moravian Empire, a state made up of Slavic tribes that covered the regions of what are now the Czech Republic, Slovakia, Poland, Hungary, and Serbia from about A.D. 830 to the turn of the century. The graves are thought to hold the remains of girls and young women from noble families. “We also found female jewelry in each of the graves, earrings crafted by granulation,” said Lukĕk Galuška of the Moravian Museum. “It is the most typical female jewelry from the era of Great Moravia. Most of them are silver and some of them are gilded.” Galuška and his colleagues plan to analyze DNA samples from the bones.