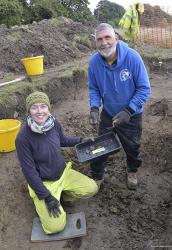 Brignall - Evidence of prehistoric farmers in Teesdale has been uncovered at an archaeological dig at Brignall. Archaeologists seeking the remains of a medieval toft were amazed when they came across shards of prehistoric pottery, possibly as old as Stonehenge. The pieces from the late neolithic, early bronze age period date back to about 2,500BC. The neolithic period was a time when people were transitioning from hunter-gather to farming. Archaeologists and volunteers dug two trenches based on a geophysical survey. Initially the group pulled pieces of medieval pottery out of the top soil and sub soil of one of the trenches, but the archaeologist said these were probably mixed into the ground through normal farming activities. They had hoped to find a burrow or burial mound because of a circular feature that was noticed in the survey. Mr Cooper said: “What we are finding moves away from that theory. It might be a settlement.” The shards resemble “burnt Hobnobs” and can be identified by clumps which were used to temper the pottery. Tony Metcalfe, of the Altogether Archaeology project which is volunteering at the dig, added that animal bones and teeth have also been uncovered at the prehistoric site. He said: “It is very important to get an understanding of how our forefathers lived. It’s good because we are discovering new things.” The second trench has uncovered a toft, but volunteer Dave Hayes found an unusual piece of Roman pottery among the medieval remains. He said: “It came out strangely. It was there looking at us, so bright compared to everything else.” 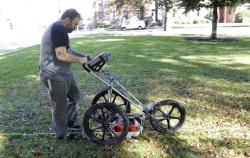 Raleigh - The first comprehensive archaeological survey of the State Capitol grounds got underway Thursday, with Jacob Turner pushing what looked like a three-wheeled baby stroller back and forth across the lawn. The stroller held a ground-penetrating radar machine that can detect anomalies more than a meter under the grass – which might indicate something left behind long ago, like an old foundation or a trash pit. Turner, a Ph.D. student from UNC Greensboro, which owns the machine, watched on a monitor for little blips in the electromagnetic waves that suggest there’s something worth chasing with a shovel. Archaeologists have made previous small investigations on Union Square, where the state’s first Capitol building was completed in 1796. But the ground-penetrating radar makes a comprehensive survey of the entire 5-acre square possible, said John Mintz, the assistant state archaeologist. Without it, archaeologists would have to simply dig, either randomly or based on hunches, and hope they find what’s there. 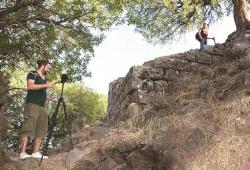 Atarneus - Atarneus was an ancient city in the region of Aeolis, lying on the mainland opposite the island of Lesbos, northeast of the town of Dikili. It gained fame in the 4th century B.C., when it was ruled by the Hermias of Atarneus over an area from Atarneus to Assos. It was later an important port of the Pergamon Kingdom in the 2nd and 3rd century B.C.  The city is said to have existed until the 1st century A.D., when it was abandoned due to an epidemic or an earthquake.

Kuragala  - Sri Lanka's Prime Minister Ranil Wickremesinghe says that an archeological survey will be conducted on the controversial historic site of Kuragala mountain next year. According to Buddhist organizations the Kuragala rock cave is believed to be a Buddhist monastery dating back to 2nd century BC. They say that in recent times the Muslim fundamentalists have taken over the site and destroyed the evidence of Buddhist heritage. However, the Muslims say the site in Kuragala is associated with the great Islamic saint, Qutab Muhiyadeen Abdul Cader Jailany, who had visited Sri Lanka over 1000 years ago.
http://www.colombopage.com/archive_15B/Oct23_1445575739CH.php?