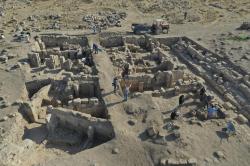 Harran - The remains of a 12th-century madrasah have been unearthed in the Harran ruins, which is one of the oldest settlements in the world . Noting that Harran is frequently mentioned in history books because it is one of the oldest settlements in the world, and the unknowns of the district are being uncovered, Önal stated that they found important remains such as a street, a monumental gate and a madrasah during the excavations this year. Önal said: “During the excavations, we unearthed a madrasah, belonging to the Zengid period. It was previously known that Harran had five madrasahs. We found one of these known madrasahs of Harran for the first time.” “We identified 24 rooms on the ground. At the moment, we have completely unearthed the monumental door of the madrasah and five rooms, and the portico partially. There is also a kitchen right next to those rooms, with large stoves and tandoori. We understood that this kitchen served many people,” he said. “Another feature of the kitchen is the bones of sheep and goats in the stoves and tandooris. The food was prepared here but the people left the city desperately, leaving the food on the stove without having time to eat it because they were convinced that the Mongols would seize the city. The monumental gate and part of the portico were revealed. Excavations continue. This structure measures about 80 meters wide,” he added. 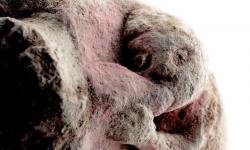 Caral - For thousands of years, breastfeeding habits have remained almost unchanged in the Peruvian Andes, according to an unprecedented research project at an archeological site in Caral, the oldest civilisation in the Americas and the origin of Andean culture. There, in a cemetery filled with the bodies of children believed to be buried around 500 B.C., researchers discovered that the way these kids were breastfed was akin to how mothers do it in modern day rural communities in the Andes. Tooth analysis of the remains of 48 children showed that the majority were breastfed exclusively for the first six months and were not completely weaned until 2.6 years of age, which is still the case in the most rural and traditional Andean populations. “We expected a younger age, like in modern times, where due to work issues and social pressures, children are weaned practically at 9 months,” Luis Pezo-Lanfranco, the Peruvian bioarchaeologist leading the study, tells Efe. Pezo-Lanfranco says that it is very likely intermittent breastfeeding occurred in Caral, the civilization that developed 130 kilometers (over 80 miles) north of Lima between the years 3,000 to 1,800 B.C.. To be sure, researchers need to find a cemetery from that period. A few burial sites from that time in Caral have been recovered but the preservation of bones was too poor to find stable isotopes of carbon, nitrogen and oxygen, which reveal breastfeeding patterns. Researchers are nevertheless confident that those breastfeeding habits found in infants buried in Chupacigarro ravine cemetery, just a kilometer from the sacred city of Caral, were inherited from the Americas’ first civilization. “In Caral, many cultural forms were created that are traditional for the Andes,” says Pedro Novoa, deputy director of Caral research and conservation of materials. While the discovery of a cemetery that would confirm the Caral researchers’ hypothesis has evaded them, indications of the significance that breastfeeding held in this primitive society have been found in several nearby urban centers. It can be seen in a series of clay statuettes representing women breastfeeding their infants and others who hold their babies in their laps, in an allegory of motherhood discovered in Vichama, one of Caral’s 12 urban centers. According to the study, it is still not clear whether that long breastfeeding period was a nutritional supplement or was due to food shortages. Ruth Shady, the director of Caral archaeological investigations, says the high infant mortality may have been due to drought and famine. “The drought is the main problem they faced, and it is very possible that this was what caused death among these children,” adds Shady, who has been studying Caral since 1994.

Cussac - Humans appear to have regularly worn footwear since at least the Early Upper Palaeolithic. However, due to the perishable nature of footwear, the archaeological record of its presence during the Pleistocene is poor. While footwear would have played an essential role in protecting the foot, it could also have been used as ornamentation and/or as a social marker. Footprints may provide the most relevant insight regarding the origin and function of footwear. Here we report the discovery of footprints in Cussac Cave (southwest France) at 28–31 ka cal BP and the results of a multi-focal approach, including experimentation, that demonstrate that Gravettian people most likely wore footwear while moving through the cave. These singular footprints would constitute one of the oldest cases of indirect evidence for this unusual practice in decorated Palaeolithic caves and reinforce the exceptional nature of Cussac already attested by the presence of monumental engravings and funerary deposits. 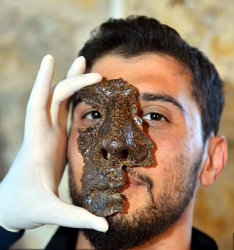 Hadrianopolis in Paphlagonia - An iron face mask that would have been worn by an accomplished member of the Roman cavalry some 1,800 years ago has been unearthed in northern central Turkey. The find was made during excavations of a fortified structure in the ancient city of Hadrianopolis in Paphlagonia, near modern-day Eskipazar, in Karabük Province. Archaeologists said that the finds indicate the influence of the Roman Empire in the region during the early 3rd century AD.

Riding Court Farm - A major 5,500 year old Neolithic ceremonial gathering place known as a causewayed enclosure has been partially uncovered within sight of Windsor Castle in Berkshire. The discovery was made at Riding Court Farm, near Datchet Defined by encircling bank and ditch segments with gap entrances, such sites represent some of the earliest known acts of monument building in Britain. The Riding Court causewayed enclosure may have been seasonally occupied, a place where communities gathered to undertake ceremonial feasting, exchange of goods, the marking of festivals and social obligations. Imported objects found in other enclosures suggest trade and exchange of exotic objects (stone axes and pottery), while evidence of feasting and human burials are known from other sites.  One feature is the deliberate consumption and wasting of meat and the exposure of human remains including the placing of skulls in the base of ditches. There are signs that pots were deliberately smashed perhaps as festivities came to a close.  John Powell, fieldwork director for Wessex Archaeology, said: Although we have only uncovered part of the site so far, the monument appears to be an oval shape with a projected perimeter of 500 metres. Currently 265 metres of the enclosure’s arc - some 12 ditch segments -  have been traced with the remainder due to be uncovered in 2018. The monument occupies a slightly raised area in what may have been a marshy or seasonably wet landscape within the Thames floodplain. Towards the base of the ditches, small concentrations of animal bone, pottery and worked flint have been found and probably relate to the activities that took place within the enclosure. The finds include finely worked flint arrowheads, knives and serrated blades, decorated pottery sherds and in one segment part of a human skull. A sparse scatter of internal features included a pit that contained a finely ground flint axe.”

Xi'an - The remains of a 3,000-year-old earthenware drainage pipe have been unearthed in Xi’an City, capital of northwest China’s Shaanxi Province. The drainage pipe was made of four cylindrical pipes 10 inches in diameter linked together to form a section 10 feet long. It was discovered in an excavation of the ancient site of Haojing which dates to the Western Zhou Dynasty (1045 B.C. – 771 B.C.). Haojing was one of the twin capitals of the Western Zhou Dynasty. The foundations of a dozen Western Zhou rammed earth buildings have been excavated since the 1980s. Since the spring of 2019, archaeologists have focused their attentions on the foundation of Building No. 14, one of the larger rammed earth building bases at the site. So far they have unearthed 13,000 square feet of rammed earth remains, including rammed earth foundations and walls up to five feet thick. The 10-foot pipe was found in the foundation. A three-meter-long pottery drainage pipe was found on the south-central edge of the building site. It is made up of four circular pottery pipes, one large at one end and one small at the other end. The pottery water pipe is decorated with rope pattern on the outside, the inside is plain, the diameter is about 25 cm, and the length varies. It is the best-preserved drainage pipe found at the site. 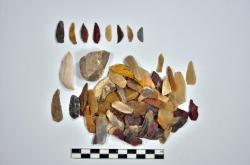 Dikili - During the rescue excavations carried out in a cave in the Dikili district of western Izmir province, 14,000-year-old stone tools and bone remains were discovered. The findings belong to the Upper Paleolithic Age (Epipalaeolithic). A team of Turkish and German scientists found that the cave was used as a cult center dedicated to the mother goddess Cybele from as far back as the sixth century B.C. and until the Roman era. Layers from the Epipaleolithic Period, also known as Mesolithic, were found in the region during surface exploration carried out. The stone tools and bones found in the layers were determined to be 14,000 years old after laboratory tests using the radiocarbon dating method. Noting that the cave was used as a short-term settlement or a seasonal campsite visited by Epipaleolithic hunter-gatherer groups rather than a permanent settlement, Pirson added: "The tools that we discovered are made of flint. Although it is possible that the flint raw material was collected from the creek bed in front of the cave, the question of where the hunter-gatherer people of the period got it from has not yet been answered."