Holderness - Iron Age skeletons dating back 3,000 years have been dug up in East Yorkshire. The remains were found, along with weapons and tools in Holderness, between Burstwick and Rimswell. The deeper of the two graves contained the remains of a man who was buried with a sword, shield and spear. The sword had been deliberately bent, which usually indicates a ceremonial event when the weapon is "killed". It is believed to be a form of religious offering, as are oxtails, which were also discovered in the graves. They were both found buried in what was likely to be an Iron Age cemetery.

Ashdod - An impressive 1,500-year-old church, with an inscription in Greek mentioning a date according to the Georgian calendar, was uncovered in archaeological excavations in Ashdod in August. According to archaeologists, the floor was part of a Georgian church or monastery. This is the third season of excavation at the ancient hill of Ashdod-Yam. The ancient city of Ashdod-Yam, on the coast of what is now the southern part of the city of Ashdod, was one of the most important cities on the coast of the Land of Israel in the Byzantine period. The city, known in sources of the period as Azotus Paralios, covered a large area, and the renowned Madaba Map shows it with public buildings, including churches and a street flanked by colonnades.  The dig uncovered a remarkable mosaic, with a four-line commemoration inscription in Greek dedicated to the structure’s builders. The inscription mentions Bishop Procopius, in whose day the church was built, and the year of its construction, apparently according to the Georgian calendar: “[By the grace of God (or the Anointed)], this work was done from the foundation under Procopius, our most saintly and most holy bishop, in the month Dios of the 3rd indiction, year 292” According to Dr. Leah Di Segni of the Hebrew University of Jerusalem, who deciphered the inscription, the date according to the Georgian calendar corresponds to the year 539 CE. “This is the earliest appearance of the use of the Georgian calendar in the Land of Israel, many years before it was used in Georgia itself,” Dr. Di Segni said.

Durg -  Archaeologists claiming Patan block of Durg district as an ancient trade centre were more than happy when a junk of 200 ancient coins belonging to Mughal era was found four feet down in village Bothli on Tuesday. A group of labourers first spotted the coins while digging the ground to erect a pole. They immediately informed sarpanch of village and submitted the coins at collector's office. According to archaeologist JR Bhagat iin state culture and archaeology department, "About 200 silver coins belonging to Mughal era were found in a copper vessel at village Bothli in Gadadih region and were found on the banks of Kharun river, a site close to ancient Tarighat, pronounced as 2500-year-old urban centre of Chhattisgarh from 2nd and 3rd century BC." The coin is inscribed in Arabic words and archaeologists were trying to figure out their meaning. Bhagat who has been excavation director of Tarighat said that Patan region and Tarighat were the hub of trade and several stone scultures were also found in the past form the nearby places. The 2,500 year old city of Tarighat yielded not only gold and copper coins but also ornaments and means of amusement- indicating a rich and affluent lifestyle of several dynasties. In early days, traders may have hoarded the coins under the ground in fear of theft, which are being found now. 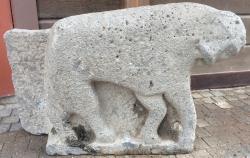 el-Araj - Archaeologists found a relief of a lioness carved on a basalt rock weighing 600 kilograms (1320 pounds) at el-Araj, which may or may not have been the site of Bethsaida, in the Galilee. The carving probably dates to around the 4th to 6th century C.E., says Dr. Mordechai Aviam, director of excavations . The relief of the lioness is quite well preserved, Aviam told Haaretz. Her head was carved in three dimensions and the body in two, as a high relief. Her image is complete, with short mane, fangs, hanging tongue, and even a tail dangling down her legs. The rock was carefully lifted by crane and taken to a safe place, he says. Lioness? Mane? Asked how he could tell it's a female, not a male, Aviam explained that when the artists of yore made a lion, they depicted its sex organs. As this one lacks male unmentionables, it is, apparently, a lioness. Also, its mane is small. Would she have been carved by early Christians, by Jews, or by somebody else entirely, such as pagans? Aviam qualifies that the discovery was just made days ago, and bears more study. But his initial theory is that her origin is Jewish. For one thing, during excavations at el-Araj in the summer of 2016, archaeologists uncovered the remains of a Second Temple-era Jewish village. For another, Judaism is rich in lion symbolism.
https://www.haaretz.com/archaeology/1.824084