- SRI LANKA – Ethulunuwara - The Ethulunuwara excavation site in the Anuradhapura district, the largest archaeological excavation site in the country, has been abandoned and the pits filled with earth because of the emergence of underground spring water during the excavations. The Deputy Director of Archaeology, Northern and North Central Provinces Mahinda Weerakkody said the excavation had been inaugurated in 1996 during the time of the former commissioner general of archaeology Dr. Shiran Deraniyagala as an international cultural project with the help of Cambridge University. However a team of archaeologists from the Berlin University in Germany also joined the project. They discovered a host of archaeological remains that confirmed  their opinion that a well-developed civilization had existed in that area during the 5th and the 6th centuries BC–that is about five centuries prior to the advent of Prince Vijeya. The archaeological evidence proved that the area had been called Anura even before Vijeya’s arrival. The archaeologists were of the opinion that a civilization that used Brahmin characters to write had existed in the area in the 5th century. The deputy director said the archaeologists were compelled to abandon the project and fill the excavations with earth due to the flow of water that eroded the pits.

Molino - A major archaeological dig is underway this summer in Molino, as evidence of a 1700’s mission and even a 6,000 year old artifact have been uncovered. The Mission San Joseph De Escambe was established upriver along the Escambia River — which, along with Escambia County, actually took its name from the mission near Molino. The Apalachee Indian settlement with about 75 residents is well documented, according to archaeologist John Worth. It was established in the 1740’s. A Franciscan missionary was stationed by the Spanish at the village along with 15 members of a Spanish cavalry unit until about 1757. The village was led by Apalachee Chief Juan Marcos Fant until it was destroyed during a Creek Indian raid on April 9, 1761. The village and the church were at least partially burned during the raid. Following the raid, the residents moved down the Escambia River to what is now downtown Pensacola. The Missions settlement is believed to have included a Spanish missionary church and a small Apalachee Indian village. While the walls have deteriorated over time and appear to the casual observer to be nothing more than darker soil, two summers ago UWF students found almost 40 wrought iron nails in their original positions. In what was called an “amazing” find, students uncovered a wrought iron nail still embedded in piece of wood, the remains of a beam or post where the nail was hammered about 250 years ago.

- ROYAUME UNI – Lothians - A series of archaeological digs are to take place in the Lothians to try to find products produced during the Scottish Enlightenment. Locals will be invited to join in the digs at Portobello, Prestonpans and East Linton. It is hoped that some of the wares produced by Scotland's ceramic industry during the 18th century will be found. Items dating back to the Scottish Enlightenment are extremely rare, but recent research has indicated that there is a likelihood that there may be items in the area. The Scottish ceramic industry of the 18th century focused on the export market, with goods being sent mainly to America, Canada and south-east Asia. Many of the items were not marked so their Scottish origin remained largely unknown and unappreciated until recently. The sites have been chosen following recent research that identified The Whim, near East Linton, as being associated with the development of a mid-18th century porcelain. The digs are to be carried out at Portobello Potteries, West Pans Potteries in Prestonpans and at the Whim. Recent research has identified the Whim as almost certainly associated with the development of a certain type of porcelain of the mid-18th century.

Yenikapi - Archeological digs at Yenikapı, the site of excavations for an important transfer hub in İstanbul's metro system, the Marmaray project, have revealed yet another marvel: an intact shipwreck believed to be from the fifth century, complete with its load.   Researchers, who have been working on the site since 2004, are in the process of uncovering the well-preserved remains of the ship. One archeologist said this is probably the first time in the world that a shipwreck had been found with its full load and timber frame completely intact. “The width of the wreck is about five meters. This is one gunwale. There is probably another one which has not yet been uncovered. Some of the amphoras on top [of the cargo] are broken but those in the lower layers appear to be intact. This is the largest cargo ship yet to be uncovered. There is no other example in the world of a shipwreck where the timber of the ship as well as its load are in such good condition. If the wreck had been at sea, it would not have been this well preserved,” said archeologist Mehmet Ali Polat. The wreck is among some 35 sunken ships at the old Byzantine harbor which had silted over, probably in the 10th century. The discovery of other Byzantine merchant ships has led this to be described as the greatest nautical archaeological site of all time. A collection of the discoveries has already been put together in an exhibition at the İstanbul Archaeological Museum, together with artifacts retrieved during other metro excavations around the city, including a hugely important find on the Asian side of the city at Üsküdar. The dig is expected to continue through the end of summer.

Grand Pré - An archeological dig in Grand-Pré is digging deeper into the history of the early European occupation of Nova Scotia. Aaron Taylor, a grad student from Saint Mary's University in Halifax, has been working with others to find bits and pieces of clues in a mystery of the Acadian people expelled by the English in 1755. There is now evidence that English immigrants from Connecticut probably built new homes on old Acadian stone foundations just a few years following the expulsion. Lots of pieces of pottery, coins, musket balls, and tobacco pipes are all pieces of the history of the small Annapolis Valley town that's been defined by stories such as the myth of Evangeline. Evangeline: A Tale of Acadie is a 19th century poem written by American poet Henry Wadsworth Longfellow about an Acadian woman separated from her lover, Gabriel, in a poem that has convinced many people that the myth is true. Beyond the emotion and romance of the Acadian story, the revealing of the artifacts and the science slowly tells the real story of the Acadian history. 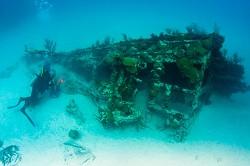 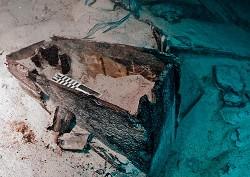 A secret stash of wine bottles discovered on the shipwreck the Mary-Celestia marks a new chapter in the story of this well-documented Civil War blockade-runner. A team of international marine archaeologists and Government’s Conservation Services, made the discovery of five full wine bottles last week during a high-profile excavation. They found the bottles stashed in a crumbling wooden crate in the bow of the ship, separate from the main cargo that has long been excavated. The mini haul adds weight to the theory that the blockade-runner, which sunk under mysterious circumstances in 1864, was carrying contraband or that the bosun had stowed away a personal stash of goods there. The Mary-Celestia is a wreck with historical significance to the United Kingdom, where she was built, Bermuda, where she operated out of and where she wrecked and the United States, where she ran to as a blockade-runner during the US Civil War. The excavation also yielded the remains of leather shoes, rope, a hairbrush and the wooden form for a shoe among other items.