Licurnique - The archaeological complex of Licurnique, located four hours from Olmos district in Peru’s northern region of Lambayeque, reveals evidence of an astronomical laboratory from the formative stage. According to excavators, astronomical functions were engraved on rocks that have successfully stood the test of time. The said archaeological site dates back to 3,500 or 4,000 years ago, and it is worth exploring without a doubt. In it, archaeologists found a petroglyph that consists of a stone altar, an expression of religious superposition. It details and provides an understanding of Licurnique’s inhabitants. Furthermore, astronomical observatories were engraved on a flat-surface rock, which were used to track stars and therefore to forecast rain fall for crops and human consumption. In addition, explorers Juan Martinez and Manuel Curo agree that this complex combines ancient, Hispanic and Andean influences, event though it is unusual to find a blending of these three cultures’ customs, art and believes. The astronomical laboratory was located near a river, whose vestiges are still visible but need to be preserved. It should be noted that Licurnique is one of the 24 archaeological sites to be preserved under an inter-institutional agreement between Olmos district and the Naylamp-Lambayeque Executive Unit. 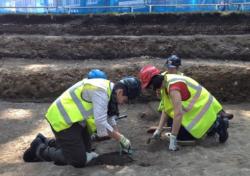 Clerkenwell- Amateur archeologists digging up an ancient burial ground where victims of the black death were laid to rest may have found evidence of a 600-year-old monastery. A total of 25 plague victims were dug up at the site in Charterhouse Square, Clerkenwell, last year during work for the Crossrail project, but experts believe there could be more skeletons in the mass grave. The new dig is to uncover evidence of a Carthusian monastery built in the 1400s to pray for victims of the bubonic plague, which killed 100million as it swept across Europe. Nick Elsdon, from Museum of London Archaeology who is managing the project, said: “What we have found here is a medieval surface. “What we can’t tell is whether it’s a courtyard or just a path. “There is a good chance the kitchens and grounds are somewhere nearby. Because the Carthusians were vegetarians the meat kitchens were outside the monastery. “We know it’s somewhere in the square but unfortunately we don’t know where.”Maps from the 1600s clearly show a building in the square. The dig is scheduled to end on Saturday.

Istanbul - Aerial photos showing the roof of Istanbul’s Grand Bazaar have revealed the level of risk for the roof of the historic site, which was further damaged by heavy rains last week.  Cracks that emerged two years ago on the roof of the 553-year-old bazaar were reportedly enlarged following the downpour that hit Istanbul last week. Some of the roof arches have had to be reinforced with steel supports due to apparent the risk of collapse. The Grand Bazaar is one of the largest covered markets in the world with 22 gates, 64 paths and 3,600 shops. 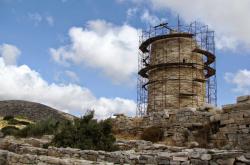 Naxos - The Cheimarros Tower of Naxos will be restored following the approval of the Central Archaeological Council. It is one of the most remarkable monuments in the Aegean Sea,  one of the most important monuments of Naxos and a point of reference of the island along with Portara (gate). The Cheimarros Tower was declared an archaeological site in 2011 along with two adjacent Byzantine churches, a part of an ancient road and part of the Tower’s fencing wall. The Tower imposingly stands out in a remote area with impressive scenery. It is a building of the 4th century, 15m in height with a double wall. It was made of the local white marble without a binding agent and with great skill that indicated the high quality of stone carving in the classical antiquity. The gap between the two faces is filled with a mixture of clay and boulder. The fine matching of the exterior stones without binder is an evidence of the high quality of the ancient stone art. The strong defensive character of the tower is verified by its height, the presence of only one window at a height of 10m and its small loopholes. In the interior of the building there is the ground floor and three further floors connected with a marvellous marble staircase. It is estimated that along with the roof the initial height of the tower was 18m but its shape isn’t certain. Finally, the tower is fenced with a 35m-long wall.