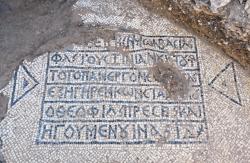 Jerusalem - Israeli archaeologists on Wednesday unveiled a 1,500-year-old portion of mosaic floor bearing the names of Byzantine Emperor Justinian and a senior Orthodox priest. David Gellman, director of the excavation in east Jerusalem’s walled Old City, said that while the area was rich in archaeological finds, few such inscriptions had been found.“Direct text and letters from people back then are relatively rare,” he told AFP. The Greek inscription, dated at 550 or 551 AD, commemorates the founding of a building thought to be a hostel for pilgrims near the city’s Damascus Gate. Constantine, the Orthodox priest who founded it, was abbot of the Nea Church, dedicated to the Virgin Mary and the largest church in Jerusalem when it was built in 543 AD. Gellman said the rectangular section of mosaic, 1.14 metres (3 foot 7 inches) on its longest side, “tells us about the way churches and monasteries worked back then. It makes this piece very unique”. “It tells us that the abbot, the head of the big church in Jerusalem, was not only the head of that specific church,” he said. It was discovered intact about a metre (three feet) below street level as Gellman and his team made a routine exploratory dig ahead of the arrival of workers to lay communications cables. “We were very close to closing the excavation when I noticed that a few of the mosaic stones, which were otherwise plain white, were at a different angle and seemed to be a little darker,” he said. “I cleaned up that small corner… and found that it was the bottom left corner of the inscription itself,” he added. “At that moment I realised that we have a very unique find here.”

Humber Estuary  - The study found that the area contains a long and interesting history, with evidence of storm surge deposits, ancient river channels and areas of peat from as far back as the Middle and New Stone Age (approximately 3,000 to 8,000 years ago), which suggests that landscapes occupied and exploited by prehistoric people survive beneath the current farmland. Across the higher parts of the site evidence was also found of Roman settlement activity which evolved into the medieval period as communities settled closer to the shore as the land was drained. Stephen Kemp, senior archaeologist at the Environment Agency, said: “Our initial assessment begins to tell the stories of communities by the Humber that learnt to adapt to environmental changes, like rising sea levels. “When many of these ancient communities lived here the coast was much further away and the surrounding land was significantly less populated, enabling people and the ecology to thrive.

Port Royal - Underwater archaeologists using a new state-of-the-art technology are mapping out the submerged portion of the 17th-century town of Port Royal in Jamaica. Port Royal was the English mercantile capital of the New World, and as such, an important and wealthy centre for trade and commerce for the entire West Indies. Known as the ‘wickedest city on Earth,’ the town was famous for its loose morals, pirates and bullion. On June 7th 1692, Port Royal was destroyed by an earthquake, quicksand and a final crushing blow of a tsunami. Two thirds of the city was wiped out, sending it to the bottom of the sea. To create a precise digital model of the ruins of Port Royal in three dimensions, with photo-realistic detail, Dr. Henderson and colleagues carried out a high resolution survey of the partially submerged site. “The site is actually covered in silt and redeposited coral, so it is buried under about 6 to 10 feet of deposit,” Dr. Henderson said.“This is great from an archaeological point of view, because a lot of the site will be sealed, meaning it is in excellent condition, but it limits what can be seen.” “New technology is opening up submerged archaeology for the first time,” he noted. “Now we can do photo realistic 3D surveys of what is actually under the sea and show it to people, which was not possible before.” “Previously we could only rely on drawings, photos and video but now we are at a point where people who would never have seen a submerged site before will be able to see exactly how these sites appear on the seabed.” “This technology is key to raising awareness about the importance of underwater cultural heritage.”

Faversham - Excavations at Abbey Farm where there are previously unrecorded Roman barns have uncovered evidence of an emporium serving the port at Faversham. Discovered by Dr Paul Wilkinson from the Kent Archaeological Field School, recent work has shown that the waters of the Swale estuary lapped the buildings, which during the Roman period sat beside a large tidal inlet deep enough to harbour ships. The project has focused on the timeline of the complex’s huge bathhouse where silver jewellery, exotic glass vessels and coloured wall plaster are among the small finds. Dr Wilkinson says the baths would have catered for ship crews mooring up in the town. “The building was originally built in the 2nd century AD as a barn with a concrete and chalk floor - we have found the remains of stalls used to house farm animals in the Roman estate. “But very soon afterwards, the building was rebuilt as a huge bathhouse, with plunge pools, hot rooms, steam rooms, and warm rooms for massage. “The decoration has the feel of a municipal baths with none of the luxurious features one would expect of a private enterprise bathhouse. “Given the size of the bathhouse it is far too large for a Roman villa estate. “It is probably too far from Watling Street to have been an imperial posting house with hotel but it may have catered for the crews of visiting ships.” A silver finger ring found in rubble at the site has been dated to the Anglo-Saxon period. The ring, which is only large enough for a child’s hand, suggests the building was demolished in the late 6th century to make a platform for a timber hall found in last year’s excavation. Dr Wilkinson says the major investigation at the site will continue. “The latest investigations have unravelled some of the mystery of the building’s function but this work is still ongoing,” he said. “Field walking has indicated there are other Roman buildings alongside the inlet and future investigation – including geophysical survey – will focus on their chronology and function.”

Side - The Temple of Apollo, dating back to the 2nd century and the time of Roman Emperor Antoninus Pius, has been reinforced after its columns began to show signs of aging. The concrete bases carrying columns of the ancient Temple of Apollo, a symbol of Side in the southern province of Antalya’s Manavgat district, were worn down over time and irons inside the columns had started coming to the surface.  The temple’s five columns and headings, which have remained standing next to each other over centuries, were restored between 1984 and 1990. But the irons placed inside some columns during this process started coming to surface due to the effect of weather conditions.

Gizeh - A team of archaeologists and restorers were dispatched on Monday to the Giza Plateau to inspect work achieved at Khufu’s second boat project, and to investigate the condition of a damaged beam. Since 2010, a Japanese-Egyptian team has been working to lift, restore and reconstruct the ancient boat, 4,500 years after it was buried as part of King Khufu's funeral rites. So far, 745 pieces of the 1,264 pieces of the whole boat have been removed from the excavation pit. Ayman Ashmawi, the head of the Ancient Egyptian Department at the Ministry of Antiquities, told Ahram Online that the boat beam was damaged by accident when a crane malfunctioned, leading it to come into direct contact with a beam within the pit. "A very small part of the beam was subjected to a very mild deterioration which does not have any impact on the beam itself and could be easily restored during the restoration work carried out by the efficient and skillful Japanese-Egyptian team," Ashmawi asserted, adding that his observation and the team escorted him during his inspection tour confirm the report submitted by the project team. Eissa Zidan, director-general of first aid restoration at the project, explained that the pit houses around 1,264 wooden beams in 13 different layers. The majority of the beams are in a very bad conservation condition while a minority are almost fully decomposed.