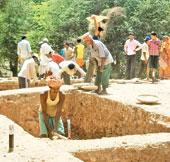 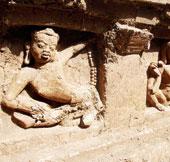 Moghalmari - Buddha statues dating back to sixth and seventh century AD have been found at a West Midnapore site where archaeologists have stumbled upon the ruins of a “Buddhist monastic complex” resembling the ancient Nalanda University. The statues were discovered yesterday at Dantan’s Moghalmari village, 180km from Calcutta and near the Odisha border, by a team of Calcutta University archaeologists. “It appears to us that this was an institution on the lines of Nalanda. Some of the decorations found are similar to those in Nalanda,” said Asok Datta, a professor of archaeology and a former head of the department who has been leading the team. Datta said monastic complexes were found in Murshidabad and Malda around two decades ago but the one in Dantan is the biggest yet in Bengal so far. “It appears the ruins of the monastic complex is the largest so far found in Bengal, measuring about 3,600 square metres.” The archaeologist said the complex and the statues traced their roots to the reign of Sasanka, who ruled Bengal between 590 and 626 AD. 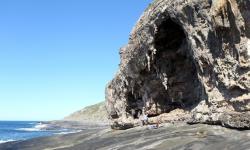 Middle Island -  Ruthless, murderous and cruel yet charismatic and passionate, Black Jack Anderson ruled the islands and waters off WA's Recherche Archipelago in the early 1800s. He is Australia's only known pirate, yet the story of his life and crimes is little known outside of Esperance, the south coast town closest to Anderson's hunting ground. WA archaeologists, who went to Middle Island - the biggest island in the archipelago - during a recent expedition to the remote area, surveyed what is believed to have been Anderson's cave in a bay on the south side of the is The limestone cave, which leads to chambers and tunnels that go deep into the ridge, is the perfect place for a pirate to hide his loot, as local legend has it. land. Anderson is thought to be buried somewhere on Middle Island after members of his crew murdered him. The remote cave contains enough sandy deposits to do an exploratory excavation in the hope of finding evidence of sealers and whalers, including the pirate and his crew. Applied Archaeology Australia managing director David Guilfoyle said they also believed indigenous people could have used the cave thousands of years ago when sea levels were much lower than today and the cave was in a wooded area.

INDE -  Vanapechialai / Vanaraparai Caves -   A young archaeologist has found two caves with stunning rock art belonging to the prehistoric and early historic era. The caves, ‘Vanapechialai’ and the ‘Vanaraparai’ abound with red and white ochre paintings and are located in the Udumalaipettai forest range in Tirupur district. Sharing his discovery with Express, C Vijayakumar says Vanapechialai has a large number of faded red-ochre paintings. “There are six red hand marks and certain unidentifiable images. However, there are six bright parallel lines in a zig zag fashion in red ochre resembling flickering of flames.” In the same cave, there is also a white-ochre painting, which portrays a man seated on an elephant (22 cm long, 18 cm wide). Vijayakumar says the white-ochre drawing has been done over red-ochre. The Vanaraparai cave has the famed ‘hand’ mark, which is early man’s first effort in documenting his identity. “It is imprinted twice in pure red-ochre. In the right hand, the ring finger is missing, suggesting that the imprint is that of the village chieftain or Moopan. In primitive societies during pre-historic period, the Moopan’s ring finger was always cut.” The cave - big enough to house 150 cows - has paintings ranging between 5 cm and 32 cm. There are altogether 28 sketches of early man, besides images of animals, which include a couple of elephants, men on deer with a primitive hunting weapon, monkeys, the sun and a faded moon. T Sathyamurthi, former Superintendent of the ASI, Chennai Circle after studying the images describes the discovery as a landmark. The Vanaraparai paintings are datable to the prehistoric period of 1000 BCE (3,000 years ago) and the red ochre painting belongs to the early historic period corresponding to the beginning of the Common Era (2,000 years ago). “The discoverer deserves our compliments,” he adds. 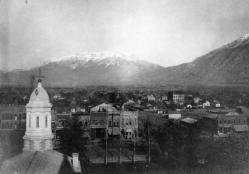 Provo - Brigham Young University students, under the direction of the school’s Office of Public Archaeology, have been excavating the remains of the first Provo Tabernacle. Since February, the students have unearthed the foundation and, after sifting through tons of dirt, artifacts that shed light on life in Provo in the late 19th and early 20th centuries. Along with nails, coal from the stoves that heated the building and plaster from the basement walls that still retained some color, the archaeologists found coins, buttons and children’s toys, such as a ceramic doll’s face the size of a quarter and a toy animal. 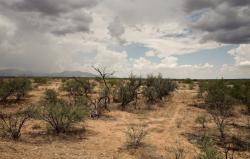 Arizona - If you walk through the desert in southern Arizona you can find evidence of a major migration. Water bottles, shoes, food wrappers — these are some of the things left behind by the thousands of people who try to cross the border between Mexico and the United States every year. For some people, the items are trash to be cleaned up; for others, they offer a window into a perilous voyage. n 2008, Jason De Leon began documenting and analyzing what migrants leave in the desert for a research project. An assistant professor of anthropology at the University of Michigan and trained archaeologist, De Leon sees the sun-bleached backpacks as artifacts that tell a larger story.